Wave or ripple? Voter registration numbers in Harrisonburg on an ordinary path to the mid-terms.

With the upcoming midterm elections dominating the national news cycle, voter registration numbers around the country are soaring. Over 800,000 people signed up on National Voter Registration Day on Sept. 25, according to Nonprofit VOTE, who sponsored the event. State election officials have said that registrations are up this year over 2014, the last midterm election year. In Harrisonburg, however, an entirely ordinary number of newly registered voters is bucking this trend.

When numbers were reported for the month of August, the city had a net loss of voters so far in 2018. And despite a September flurry, when the registration report shows Harrisonburg added 441 new voters, city voting rolls show a net gain of just 36 for the year. Debbie Logan, who has served as the Harrisonburg Registrar and Director of Elections since 2007, said she expects a last minute flurry of registrations leading up to the October 15 deadline to push those numbers further into the positive.

Historically Harrisonburg does not see a large addition of voters in a midterm year, with the net gains over the past two decades between a few dozen and a few hundred new voters. Presidential election years see the largest gains. Over one thousand new voters were registered in Harrisonburg in 2000 and 2004. In 2008 those numbers quadrupled with over 4,000 new voters added to the rolls during the Obama and McCain presidential campaigns. This pattern continued in 2012 and 2016, with over 4,000 new voters registering each of those years. 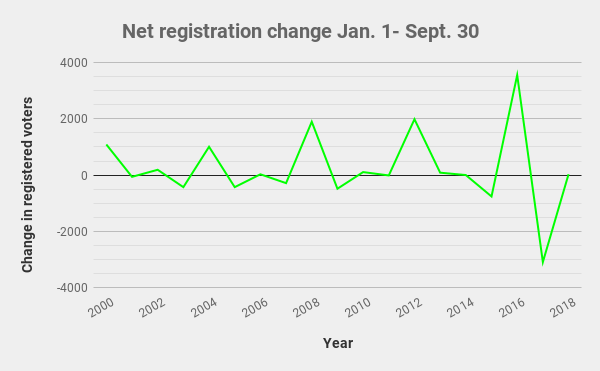 In certain years the number of registered voters in the city declines. Voters are removed from the rolls when they die, are convicted of a felony or move out of the city. The U.S. Postal Service notifies the registrar’s office when a person changes their address. Many of the losses in the city come from college students who are registered in Harrisonburg and then move out of the area after graduation. 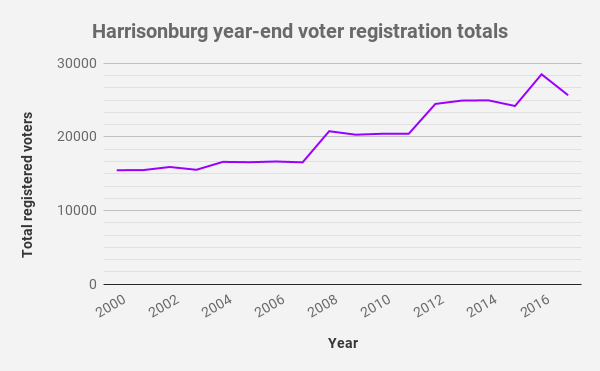 After a few presidential bumps, 2016 registration nearly doubled the 2000 total. Source: State Board of Elections

Voter registration in Harrisonburg made national news in 2016 when a James Madison University student, a paid employee for a registration drive ran by an organization called HarrisonburgVOTES, was caught submitting 18 fraudulent registration forms, some using the names of deceased people. An employee in Logan’s office uncovered the fraud when they noticed the name of the deceased father of a retired local judge on one of the applications. An investigation by local police and the FBI ensued and the student, who claimed he filed the fraudulent forms to meet a quota, plead guilty to a misdemeanor fraud charge and was sentenced to 100 days in prison. The incident generated an entry on the fact checking Web site Snopes.com and became central in the national debate about voter fraud and voter I.D. laws.

According to Logan the 2016 incident was an anomaly and her office rarely encounters attempts at fraudulent registration. When they do happen the cases are turned over to the Commonwealth’s Attorney’s office for investigation.

Those interested in registering to vote in Harrisonburg have four options. They can register online through the Virginia Department of Motor Vehicles or the State Board of Elections, sign up through a third-party registration drive or come into the city registrar’s office and fill out an application. All new applications have the social security number verified and are checked against a state police database for felon status. A confirmation letter is sent to the new applicant at the address listed on their form.

Logan said her office does voter outreach events at Harrisonburg High School to encourage students to register. She also attends events like naturalization ceremonies and the Harrisonburg International Festival to encourage registration. Numerous independent voter drives, some associated with political parties, are active in the city.

Voters in the city have until October 15 to register to be eligible to vote in the November election. If registering in person they have until 5 p.m. to visit the city registrar’s office. Online registration can be completed until 11:59 p.m. on that day. Logan also encouraged those registered in Harrisonburg to visit the State Board of Elections Web site to confirm the status of their registration before October 15.