Fresh and local and all grown-up: a look at a movement with staying power

You hear about the local food movement and buy fresh buy local, but can you put a figure on the local food economy in our area? Nearly all of the restaurants in downtown Harrisonburg source locally grown food for ingredients on their menus. Harrisonburg City Schools have a $100,000 budget for locally purchased foods for school meals that come from within 100 miles of the city. Andrea Early, executive director of school nutrition for Harrisonburg’s schools, says that serving local foods helps kids make that connection between the food and who grows it. She hopes that by educating kids about healthy eating they will make healthier choices as adults.

James Madison University, Eastern Mennonite University and Bridgewater College are also committed to providing local options to students in their dining facilities as well as maintaining small campus gardens that produce food for the schools.

The Shenandoah Valley Produce Auction gives farmers a venue to sell their produce to the highest bidder and Virginia Mennonite Retirement Community has its own farm and grows over 36,000 pounds of fruits and vegetables annually to use on its campus.

Virginia Cooperative Extension’s Buy Fresh Buy Local campaign challenges residents to spend $10 each week on locally grown food. If every household in Harrisonburg did so, it would generate more than $8 million annually for the local farm economy. 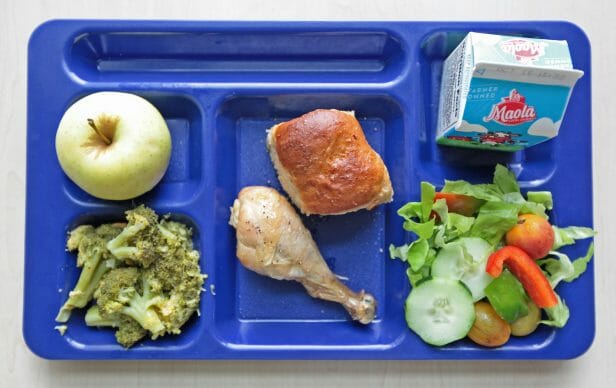 Harrisonburg City Schools strive to provide local foods to the kids. During Farm to School week in October they serve lunches where most of the items on the menu are sourced locally. A lunch at Bluestone Elementary School presents a golden delicious apple from Showalter’s Orchard in Timberville; broccoli from Portwood Acres farm in Port Republic; organic and free ranged chicken drumsticks from Shenandoah Valley Organics (both raised and processed in the Shenandoah Valley); homemade rolls with wheat flour from Woodson’s Mill in Lowesville; salad made with hydroponically-grown bibb lettuce from Portwood Gardens farm in Dayton; veggies from the Shenandoah Valley Produce Auction in Dayton, which source their produce from farms within a 100 mile radius, and Maola Local Dairies in Newport News, who gets its milk from various farms in Virginia, Maryland and North Carolina. 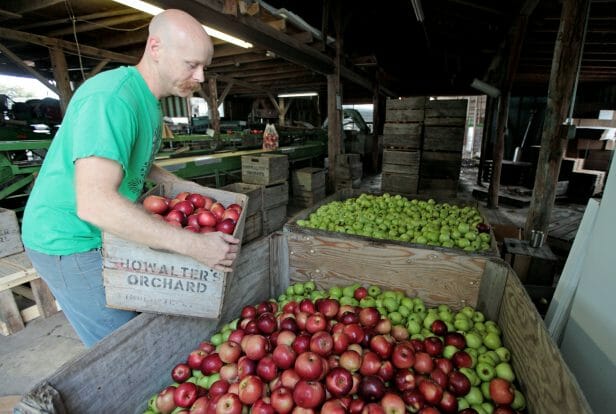 Adam Smith mixes a crate of Empire apples with golden delicious apples after sorting them for blemishes at Showalter’s Orchard in Timberville. Showalter’s Orchard has been growing apples since 1965 and expanded their facilities about 10 years ago to accommodate the local food movement where they have seen an increase in urban customers visiting the orchard. They provide apples to Eastern Mennonite University and Harrisonburg City Schools and to the schools in Rockingham, Augusta and Hardy counties. The remaining apples are wholesaled at the orchard. The cider and hard cider they make are distributed to many local grocery stores in the Valley. 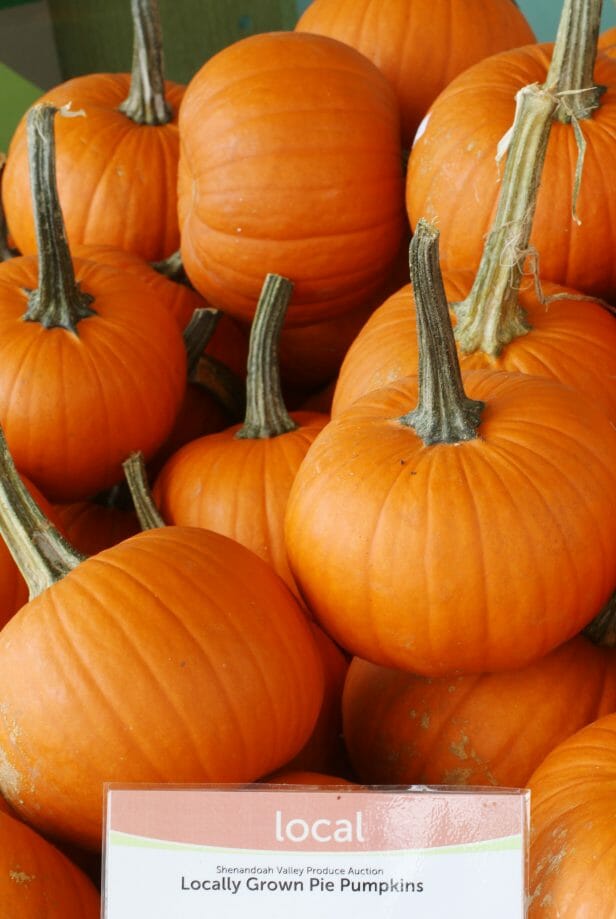 The Shenandoah Valley Produce Auction provides a place for local farmers and gardeners to wholesale produce in bulk. Three times a week in the summer and twice a week in the spring and fall baskets, crates and pallets of vegetables, fruits, and other local goods grown within a 100 mile range hit the auction floor in Dayton where they are bought by local businesses and even out-of-state buyers. These pie pumpkins are among other gourds outside the Friendly City Food Co-op that came from the auction and bring the feel of autumn to customers entering the grocery store. 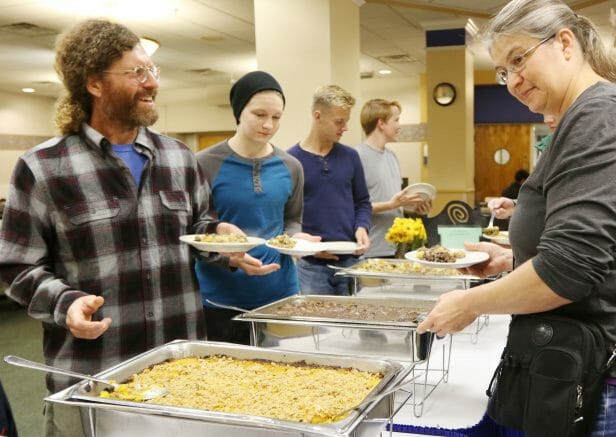 Every fall for 10 years Eastern Mennonite University has been preparing a local harvest meal for students and faculty. All of the dishes contain food that is either grown on campus or sourced from local farms. The spicy aromas of a lamb stew mix with a warm butternut soufflé and a campus garden pesto ratatouille is finished off with a tart rhubarb-apple crisp. EMU’s chef Shannon Grinnan who helped craft the evening’s menu says that local food just tastes better because it hasn’t been sitting on a truck on in a warehouse and fresh local produce keeps longer than commercially grown out-of-state foods. 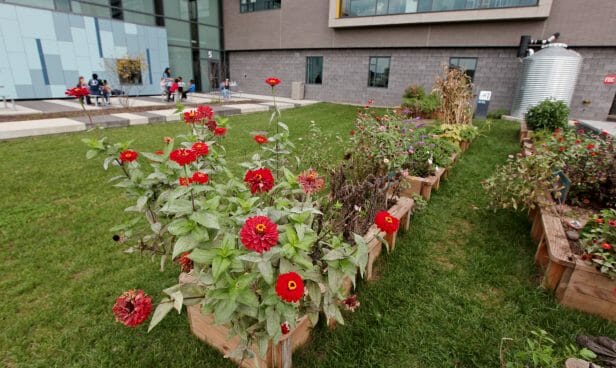 Part of the local food movement involves educating people about the importance of seeking out local food options. Many schools, like Bluestone Elementary in the Harrisonburg City School system, start early by engaging kids in gardening. Their school garden is full of plants hanging full of peppers and tomatoes, stalks of corn and vines of squash with brightly colored flowers mixed in throughout the garden to attract pollinators. 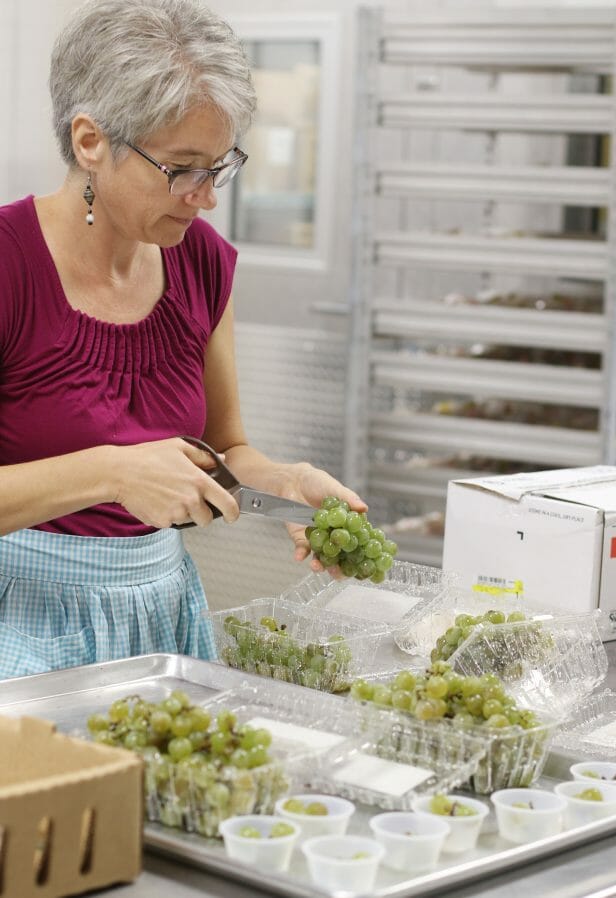 Monica Carlson snips Niagra grapes into sample cups for the kids at Bluestone Elementary School to try during Farm to School week in October. The slipskin grapes are grown at Wenger Grapes, a farm in Waynesboro. During Farm to School week local farmers visit schools to show kids what they grow as part of a movement to educate kids about the importance of eating healthier. 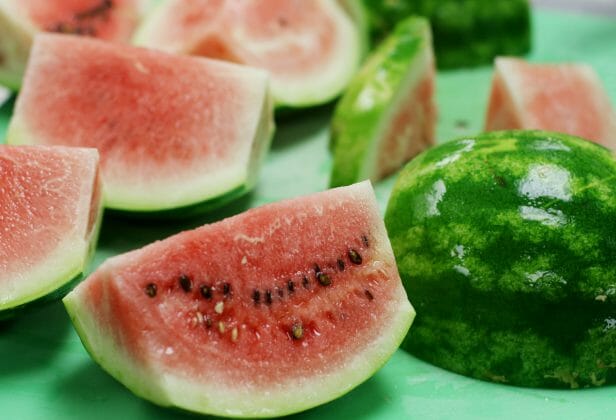 At Virginia Mennonite Retirement Community (VMRC) a chef cuts a watermelon that was grown at the Farm at Willow Run, a four-acre farm that is owned by the retirement community. The farm produces over 36,000 pounds of produce each year amounting to about 70 percent of the produce used in VMRC’s dining facilities. 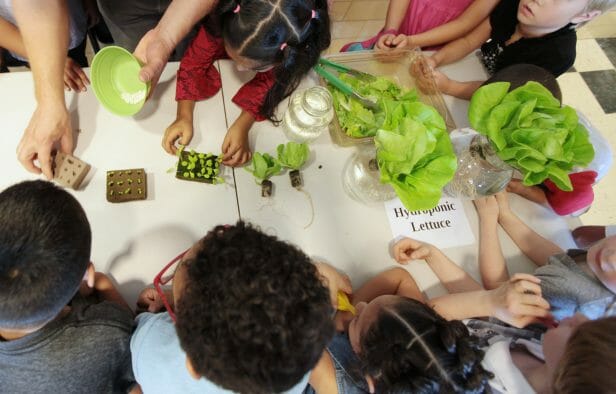 Marlan Showalter shows how he grows lettuce at his hydroponic gardens at Keister Elementary School during Farm to School week. Showalter provides lettuce to Harrisonburg City Schools throughout the school year, as well as to schools in Prince William and Goochland counties, Eastern Mennonite University, A Bowl of Good café and at local farmers’ markets. Showalter started his hydroponic gardens in 2008 and in 10 years he said he has more than doubled his lettuce production. “You have to have the interest of someone at the schools who wants to make it happen,” explained Showalter, who pointed out that he delivers his lettuce in re-useable totes packed with whole heads which, unlike commercial lettuce that comes ready to serve straight out of a bag, takes extra steps to be prepared into salad. 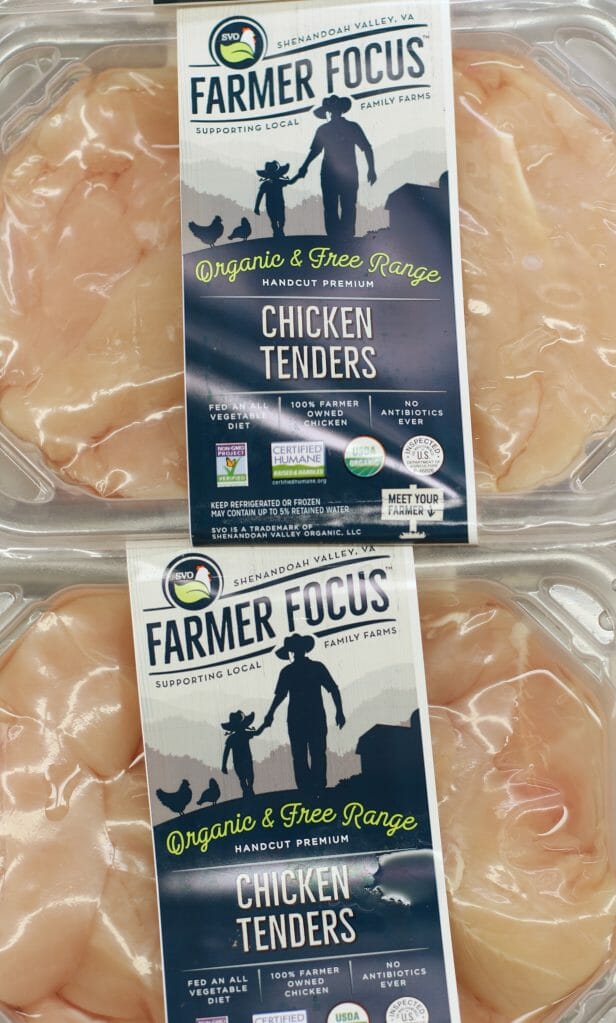 Steve Cooke, general manager of the Friendly City Food Co-op, said they source about 20 percent of their food at the grocery store locally. Meat such as this chicken comes from Shenandoah Valley Organics which raises and processes the chicken locally. The Co-op also has a year-round supply of milk, eggs, cheese and wine that are available on their shelves from local producers. 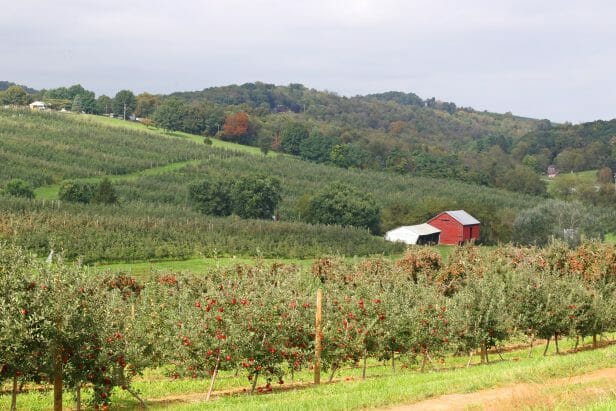 The hills surrounding Showalter’s Orchard in Timberville have been producing apples since the early 1900s. The orchard now grows over 25 varieties of apples on its 40 acres. Co-owner Sarah Showalter has seen a steady increase of customers over the last 10 years with the local food movement. “We are seeing more urban people come to the orchard to buy local food in an effort to know where their food comes from,” she said. 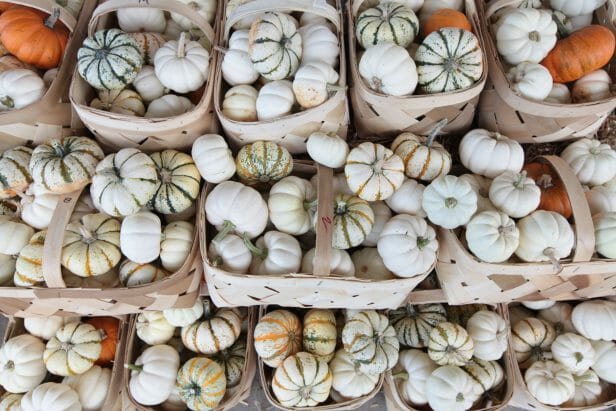 Whether you get it in a restaurant, visit a farmers market, buy it in a grocery store or have it served to you in a school or business, the local food economy is booming. More and more people are interested in buying food that originates within a 150 mile radius of their home. More farmers’ markets are popping up in small towns and cities offering patrons a chance to meet the people who grow the food they eat.