This post updated at 9:43am to add additional detail about local citizen groups’ requests to local government

Overcrowding of jails, recidivism, use of force, and arrest rates of people of color are some of the issues that Daniel Barrows, of the Valley Justice Coalition, and members of Faith in Action, a group of 26 local religious organizations working towards social activism, hope a person in this role would be looking at.

Only four such positions exist in Virginia.

Valley Justice Coalition began advocating for the hiring of a Community Justice Planner in the summer of 2017. Faith in Action and the Northeast Neighborhood Association later joined the effort. Since, there have been ongoing discussions between the groups and officials in the local criminal justice system.

The conversation will continue this evening (Monday, Oct. 15), when the Community Criminal Justice Board (CCJB) convenes.

“Essentially, there are different people with different ideas about what this position will look like. Faith In Action wants somebody who wouldn’t be working directly under the sheriff, but really wanting someone to analyze all the data that the city pays to have done, in terms of demographic info, why are people being put in jail, etc, and that person could do data analysis and present info available for the community to read, for transparency,” says Adriana Hammond, Faith in Action’s communication specialist. 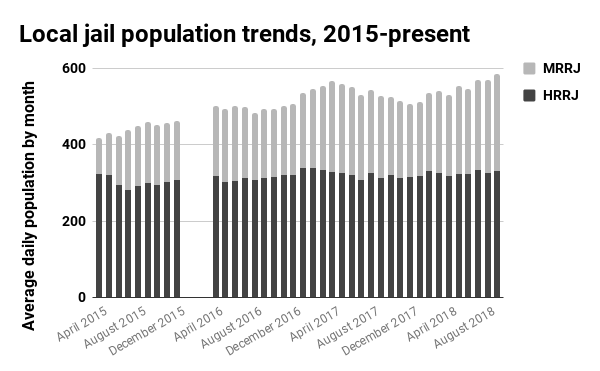 The total local inmate population held at Middle River Regional Jail and downtown at the Rockingham-Harrisonburg Regional Jail is pushing 600, nearly double the total from a decade ago. A community justice planner could help the community understand why. Data from the Rockingham County Sheriff’s Office.

Barrows envisions the role of the Community Justice Planner being threefold: support planning to meet the future needs of the city, evaluating the programs underway, and tracking progress and success of the programming in place.

“We need somebody paying attention to more recent research and best practices, and making sure we’re practicing those here,” he says. Barrows hopes that a budget for the position will be established and that a Community Justice Planner can be hired by Summer 2019. Votes on the position have not been scheduled.

“We’ve been trying to give decision makers the opportunity to explore and learn more,” Barrows continues. That has meant bringing in Thomas Jefferson Regional Planning District Community Justice Planner, Neal Goodloe, to speak to local agencies. The Thomas Jefferson Regional Planning District has had a Community Justice Planner for the past 20 years. Goodloe has served in this role since January 2015.

“I was interested in transforming the position into a research-based position. The words on everyone’s lips are ‘evidence-based practices.’ Most communities don’t have good data, trend lines that extend back in time, to inform them,” says Goodloe. Good data allows communities to ask tough questions like, “Where do you want to be, and how can you start creating a plan for where you want to be instead of just reacting one dimension at a time, in a multidimensional system?” says Goodloe.

“One of the reasons we are making progress is that we now have data that shows us, for instance, individuals who are in jail who meet criteria for serious mental health,” says Goodloe. That has allowed strengthened partnerships between the criminal justice and behavioral support services in the Thomas Jefferson Regional Planning district.

“In my adult lifetime, we’ve seen a five-fold increase in the number of people incarcerated in my community, and I struggle with that. I struggle with how difficult it is to address the criminal justice aspects of that, when they are so inextricably linked to everything else in a community,” says Goodloe.

“My view is that the position is an opportunity to have a central hub for information that is not dictated by any agency’s agenda, it’s simply dictated by best efforts to get at the truth of the system and how the system is actually working,” says Goodloe, “I largely see the position as getting everyone at the table to see how the decisions of one branch affect the others.”

According to Goodloe, once officials and the public have data, agencies are more likely to be held publicly accountable for action. This is the conversation the Harrisonburg groups want to have with officials next week at the Community Criminal Justice Board.

The CCJB is made up of representatives from the city and county and, among other duties, oversees the running of the jail.

The community groups have organized a march, which begins at 6pm, at Rockingham County Jail (corner of Market and High streets), and ends at JMU’s Memorial Hall. At 7pm, they will attend the CCJB meeting in the Memorial Hall Auditorium, where they hope to advocate for the hire of a Community Justice Planner.

Both Barrows and Hammond feel optimistic about cooperation from local government in hiring this professional. “It’s just defining the role to everyone’s satisfaction,” says Hammond.