By speaking out, a domestic violence survivor finds joy upon her return to the courthouse 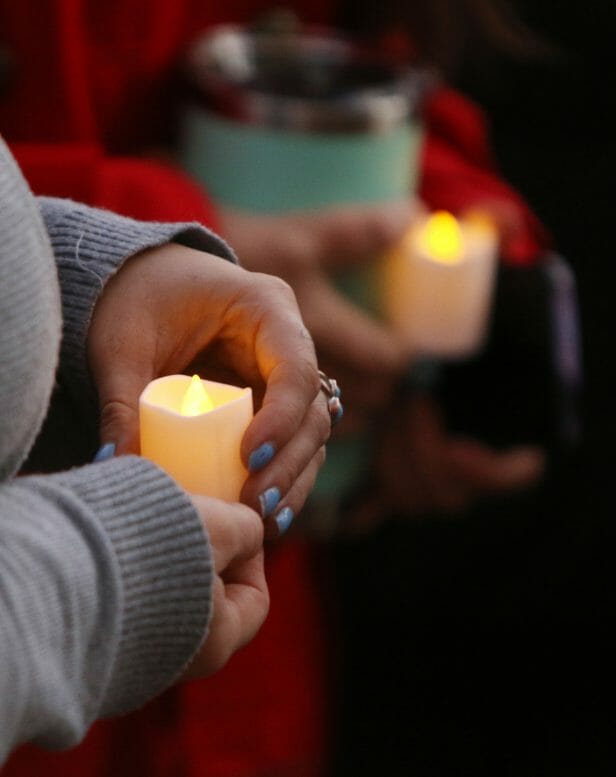 This post was updated at 11:08am with additional information & quote from First Step.

Joy is not the emotion Orpha Peachey expected to feel as she stood on the courthouse steps last Thursday, sharing her experience of surviving domestic violence.

“I felt this overwhelming joy––that I can speak now! I don’t have the shame,” says Peachey who, with her four children, left an abusive husband in 2013.

She was one of two survivors who shared testimony on October 18, at a vigil hosted by First Step, a nonprofit agency that has been in Harrisonburg since 1979, serving and sheltering survivors of domestic and dating violence. The event, attended by around 50 people, included speakers, survivor testimonies, and ended with a candlelight vigil led by local clergy and worship leaders.

“It felt surreal. I was standing on the steps of the courthouse, where we first had our custody hearing, and I was getting flashbacks of going to court, and realizing I have arrived at a position of influence and even power. Not power over people, but power to make decisions and choices for my children without receiving shame. I was standing there and realizing how far I’ve come,” says Peachey. 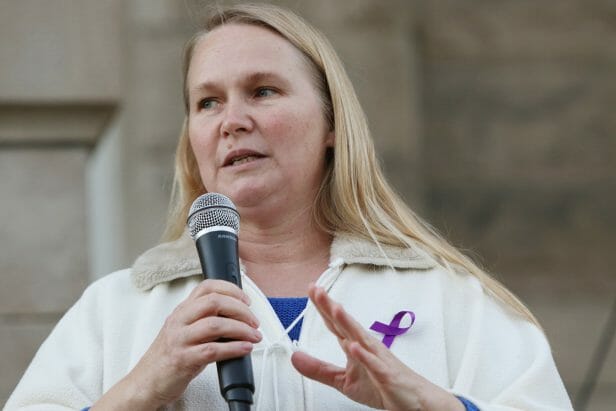 Orpha Peachey shares her story as a survivor of domestic abuse at a candlelight vigil hosted by First Step, an organization that helps domestic abuse victims on Court Square on Thursday, Oct. 18, 2018.

Manuela Vazquez, Community Outreach and Volunteer Coordinator of First Step, organized the vigil.  It’s “a way of allowing the community to stand in solidarity with survivors,” says Vazquez.

October is Domestic Violence Awareness Month. Peachey is one of hundreds in our community, and millions in our nation, with a similar story to tell.

According to the National Domestic Violence Hotline, domestic violence is a pattern of behaviors used by one partner to maintain power and control over another partner in an intimate relationship. This can include emotional, economic, sexual and psychological abuse. 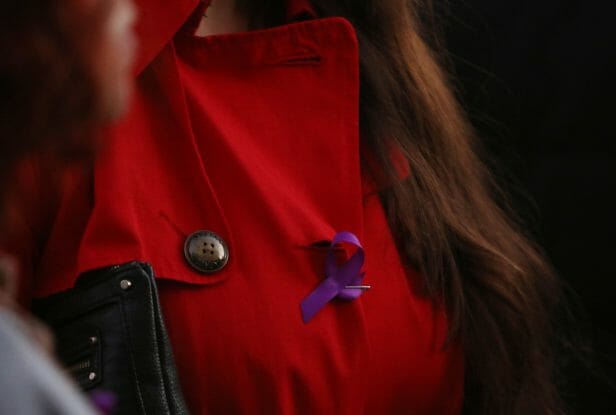 Peachey is encouraged by other women, like Dr. Christine Blasey Ford, who have shared stories of abuse––domestic or otherwise––on the national stage. She hopes this will help bring about national awareness and greater community advocacy around abuse.

“It is always so great to see the courage of survivors that come forward to talk about their past abuse. As their stories reach other survivors, that courage is passed on and more people feel comfortable coming forward and sharing their own stories,” says Vazquez.

Detective Aaron Dove, from the Harrisonburg Police Department, was also present at the vigil. Dove works directly with domestic abuse victims, through a grant funded by the Office of Violence against women. This is the third year that the grant money has provided funding for the position in Harrisonburg.

“It’s actually pretty rewarding,” Dove says of his work, “When we had our candlelight vigil, one of the survivors spoke that I had a direct impact on her and it was nice to see how things are changing for better for her and her family.”

In addition to responding to emergency domestic violence calls, Dove oversees the training for officers in the department who respond to these cases. He says in addition to law enforcement protection, community linkages are important for survivors, and that the cooperation between the police department and First Step is a strong one.

“I offer [First Step] services to anybody I talk to, establish that they are a free service in the community and that their only job is to help people who are affected by domestic violence. They take their job seriously and are very good at it,” says Dove. According to Dove, these law enforcement and community linkages help set survivors on a path for long-term recovery.

That’s something that Peachey is working on every day, for herself, for her children.

“The kids are doing well. The challenges have not stopped,” says Peachey, “They’ve come a long way to building relationships that are as healthy as possible. They’ve healed a lot.” 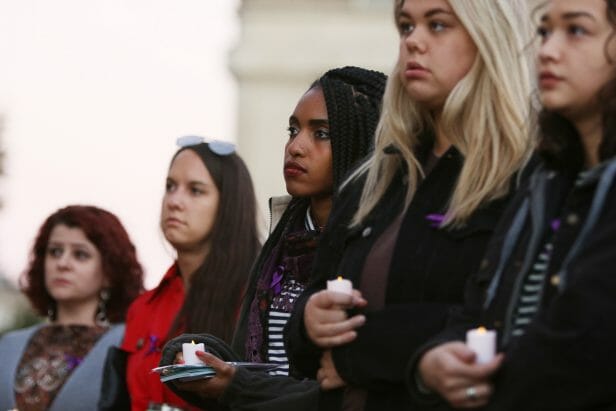 A crowd attends ?No Excuse for Abuse: A Candlelight Vigil? on Court Square on Thursday, Oct. 18, 2018 to hear testimonies from survivors of domestic violence and other members of the community who work to help victims become survivors.