Around 1,000 city residents face a sudden end to their legal status in the country

Carlos Ramos unfolded the green piece of paper he’d pulled from his wallet and waved it before the small crowd that had gathered at Blessed Sacrament Catholic Church. It was his property tax bill that just came from the city. He’s paid it for years, and on Monday, held it up as a sort of Harrisonburg membership card.

He never imagined he’d be up there doing something like this, he said. But something equally unimaginable might happen. Although he’s lived here nearly half his life, that might soon come to an abrupt and involuntary end.

Ramos arrived 20 years ago from El Salvador, looking for better work and a safe place to live. Since 2001, he’s been a beneficiary of the Temporary Protected Status (TPS) program, originally created for humanitarian purposes and available to people from a designated list of countries experiencing war or natural disaster. It now covers several hundred thousand people in the United States, the vast majority from El Salvador, Honduras and Haiti, and the Trump administration says its time for them to leave.

According to the National TPS Alliance, about 1,000 TPS beneficiaries like Ramos live in and around Harrisonburg. He’s worked at Cargill in Dayton for 15 years, now on the line that churns out turkey breasts. His wife – also a TPS holder from El Salvador – works at the Virginia Poultry Growers Cooperative in Hinton. All these years, he told the audience at the church, he’s worked, paid his taxes, and, as required by the TPS program, kept on the right side of the law.

“How are we repaid?” he said. “By telling us that we’re criminals, rapists, narco-traffickers, the worst of the worst.” 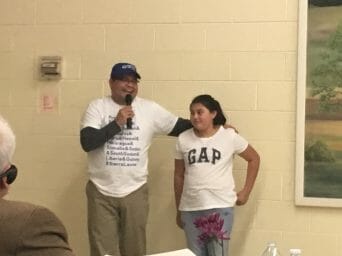 Carlos Ramos, a 20-year resident of Harrisonburg, is one of about 1,000 TPS recipients who live in or near the city.

The National TPS Alliance, a coalition led by TPS beneficiaries, formed last year in order to protect the program and advocate for a path to permanent legal residency. One of the organization’s 55 local committees is in Harrisonburg.

In August, the alliance launched “Journey for Justice,” a traveling campaign that has brought TPS holders to meet with elected officials and advocates in dozens of cities across the country. The group arrived in Harrisonburg on Sunday for an afternoon church service and march. On Monday at Blessed Sacrament, several TPS holders spoke to a group that included city council members and candidates as well as the city and county school superintendents. While the fate of the TPS program is a federal matter, one goal of the Journey for Justice campaign is resolutions of support from local governments. Later on Monday, they moved on to forum at JMU.

Mardoel Hernandez, a Honduran TPS beneficiary who lives in Maryland, also spoke at Blessed Sacrament. He asked the audience to encourage their senators and representatives to support legislation like the SECURE Act — proposed by Sen. Chris Van Hollen, D-Maryland — that would provide a path for people under TPS to obtain a green card or move toward citizenship if they meet certain criteria. Similarly, the American Promise Act, proposed by Rep. Nydia Velazquez, D-New York, which would provide a path to residency. He also urged residents to head to the polls keeping in mind the precarious status of the TPS program.

“I ask all of you citizens of this country … to help us,” said Hernandez. “We can’t vote. We hope you all vote for us.”

In late October, a federal judge in California blocked the Trump administration from cancelling the TPS program. The government has appealed, and the outcome remains uncertain.

At the end of his comments at the church, Ramos called his daughter, Marina, 11, to join him in the front. She was born and raised here — an American citizen, a sixth-grader wearing a white GAP shirt. If Ramos and his wife are ordered to leave the country, they’ll face that wrenching choice that’s been in the news more and more lately: leave her here behind? Take her somewhere they don’t want to go and she’s never been? Stay anyway, with all that would entail?

There are, according to the American Immigration Council, 273,000 Marinas out there, U.S.-born children of TPS beneficiaries from El Salvador, Honduras or Haiti.

In the lobby after he spoke, Ramos pulled another document from his wallet – a card stamped with a date in September of next year when his TPS status expires. He has about 10 months left. Marina stood quiet beside him, waiting for the interview to end. Ramos has no idea what’s coming, and it’s gnawing away at him.