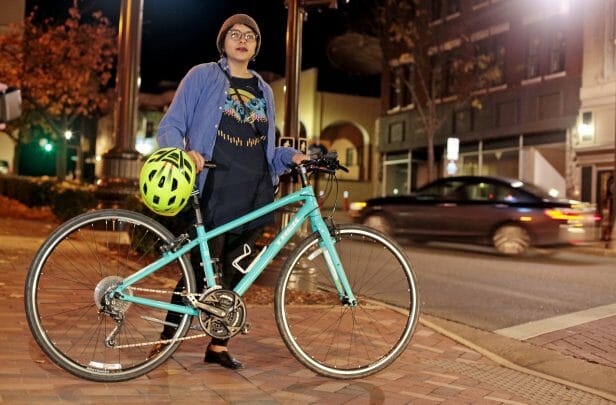 Harrisonburg resident Brenda Diaz-Castro uses her bike to get around town and to where she works at Shenandoah Bicycle Company.

After running an errand late one morning in August, Brenda Diaz-Castro was biking back downtown along South Main Street. Just after she crossed Port Republic Road heading north toward JMU, a car drifted into the bike lane she was in and sideswiped her.

Diaz-Castro, who was wearing a helmet and flashing lights, was knocked off her bike. The most frightening part, she recalls, were the moments when she was on the ground in the road, afraid that she was about to get run over by another vehicle. By instinct, she tried to hop back on her bike, but it was making funny noises and and her leg didn’t feel quite right.

Instead, she walked herself and her the bike a bit further down the road, fighting tears, to where the car that hit her had pulled off.

“I was in shock because I’d never been in a bike accident before,” Diaz-Castro said.

The driver, an older woman, was apologetic and let Diaz-Castro use her phone to call the Shenandoah Bicycle Company, where she works. Next, she called the police to report the accident.

Thomas Jenkins, a co-owner of the bike shop, arrived soon after to lend moral support. The driver said she hadn’t seen Diaz-Castro in the bike lane. A bit later, two police officers arrived, asked some questions, determined there’d been no serious injuries and appeared ready to move on.

Wanting documentation of what had happened, Jenkins asked for a copy of the accident report.

The police said there wouldn’t be one, nor were they going to ticket the driver, citing department policy allowing for the officers’ discretion in minor accidents.

Jenkins said he was shocked — an inattentive driver hitting a cyclist in a bike lane seemed to him to be a clear example of fault.

“It’s almost more about comforting the cyclist, and letting them know there was someone in the right and in the wrong,” he said. “The action of not writing a ticket is breaking the confidence of a cyclist … That’s what really upset me.”

Jenkins’ wife drove to pick up Diaz-Castro, who by that point “just wanted to pretend that whole situation didn’t happen.” She woke up from a nap that afternoon feeling poorly and eventually ended up in the ER, where she was diagnosed with a concussion. Her $2,700 medical bill, along with a $300 bike-repair tab, was covered by the driver’s insurance, Diaz-Castro said.

And she looks back on the incident with frustration.

“[The police] were kind of cold to me, considering what happened,” she said. “The whole incident made me realize how people who don’t ride bikes, how little they can care about bikers … They didn’t care about me.” 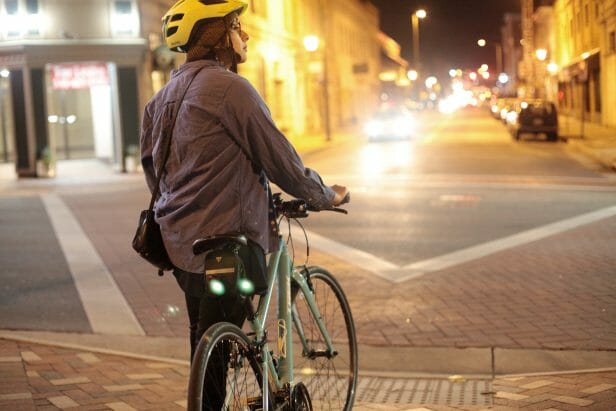 That accident occurred one month after Police Chief Eric English arrived in town to lead the Harrisonburg Police Department. After taking over, he initiated a thorough review of every departmental policy. So far, he’s looked at ones covering firearms and vehicle pursuits, as well as the department’s organizational structure.

Next week, the department will review traffic operations – a category that includes guidance for officers responding to accidents like Diaz-Castro’s.

In a phone interview with The Citizen, English said that while individual judgment plays into everything a police officer does – e.g. writing a traffic ticket vs. letting someone off with a warning when caught going 10 miles-per-hour over the limit – some situations call for more prescribed outcomes.

“When you have somebody that’s doing the right thing in the bike lane and still gets hit, maybe that’s something that we need to look at and take discretion out of the officer’s hands,” English said.

In a message to Jenkins soon after the incident, English said he would look carefully into the relevant policies. This week, he also discussed the issue with Kyle Lawrence, executive director of the Shenandoah Valley Bicycle Coalition, which wants the city to join the “Vision Zero” movement to eliminate deaths and serious injury in traffic.

Lawrence said the discussion left him optimistic that the ongoing policy review process will result in clearer protections for bikers and walkers on city streets.

“Chief English was extremely receptive to our concerns and we have full confidence that he will take them seriously,” he said. 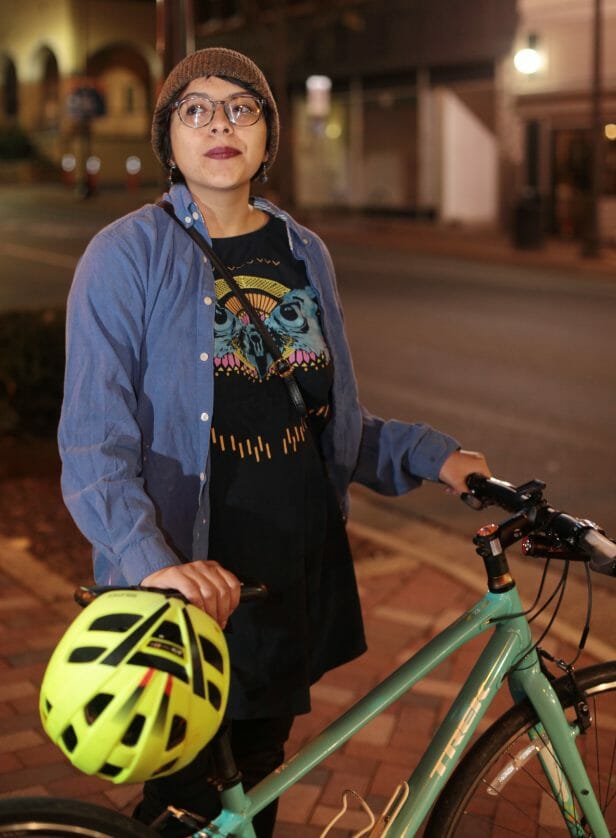 More than two months after she was hit, Diaz-Castro’s body has healed and her bike has been fixed. She doesn’t have a car, and has resumed commuting around town by bike. Her confidence, though, hasn’t recovered.

“I didn’t realize how much danger I was in, even if I did everything right,” she said.

Earlier on the morning she was hit, she’d gone on a longer recreational ride – a habit she’d only recently picked up and grown to love, for the exercise and meditation. Since the accident, though, she hasn’t done any more of that kind of riding.