Emotions and experiences of war remain fresh for Tom Showalter, one of the U.S. Army’s remaining survivors of WWII

As a 19-year-old farm boy from Rockingham County, Tom Showalter says he had no idea what to expect when he learned he was drafted into the U.S. Army to fight half a world away in the deadliest war in human history.

Farm life prepared Showalter for the strength required for war, but not for the terror he would face — when landing on Utah Beach in one of the subsequent waves after D-Day, then facing German soldiers or when a shell exploded near him while on guard duty sending shrapnel through his leg.

“I was scared the whole time,” he said.

Fewer than 500,000 of the 16 million Americans who served in World War II are alive, according to the US Department of Veterans Affairs as of September 30. Showalter — who turns 95 today, a day after Veterans Day — is one of them.

Born on Nov. 12, 1923, Showalter grew up on a farm in Singers Glen, working with his family. His parents and his four brothers and four sisters, plus aunts, uncles and cousins all living within a mile helped each other grow and harvest wheat, milk cows and keep other livestock.

“It was kind of fun to farm, really,” he said, smiling.

When he returned home on leave after basic training, Showalter’s older sisters made him get his photo taken in uniform. 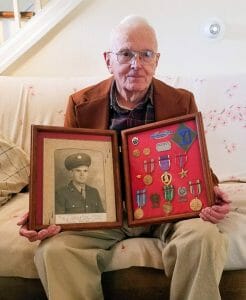 Tom Showalter, who turns 95 today, shows his military portrait his sisters made him get, as well as the medals for his service in Europe during World War II.

“They made me get in the car, drive in to one of the early photography outfits in Harrisonburg, and had this picture made,” he said. “We never wore those hats,” he said of the picture, chuckling. “Those were just for important times.”

Next to this photo sit his various commendations, as he calls them, including a Purple Heart for being wounded in service and a Bronze Star for acts of valor in combat. He also received medals for sharp shooting with a rifle and reaching expert level with a carbine.

In 1942, Showalter was drafted after completing school at Mt. Clinton High School, along with his brothers Neil and Waldo. Showalter and Waldo drafted into the infantry, Neil into the Navy. All three brothers made it home. His older brother Neil is 96.

Showalter described the conditions of the war ? marching through destroyed towns and sleeping in the snow.

“You didn’t get your blanket every night,” he said. Sometimes the trucks couldn’t reach the camp due to weather. When that happened, Showalter would stay up all night “kicking trees” to stay warm.

“You don’t realize, but this is the way things looked,” he said, showing pictures of bombed towns. “The areas you went through were just about banged up.”

At 5 a.m. on Feb. 18, 1945, while on guard in the town of Saarlautern, Germany, something exploded nearby, and shrapnel ripped through his thigh, a wound that earned him the Purple Heart.

“It was a mortar shell ? presuming, because you can’t hear them coming. When it explodes, it’s not this fine ground stuff, but it comes off in particles, and that went in my leg right here into the bone,” he said, gesturing to his upper right thigh.

Showalter crawled through half a mile of snow to find help, and after eight weeks in the hospital, returned to the front lines. 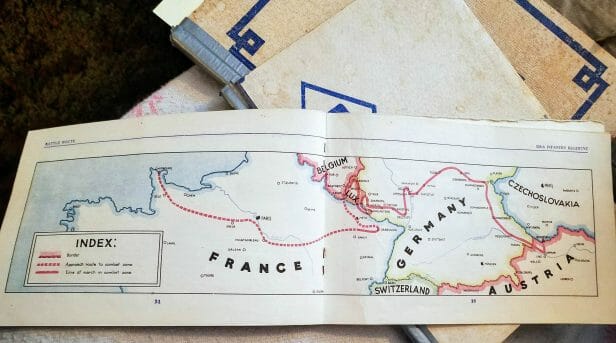 The number of casualties in the war appalls Showalter. On Nov. 8, 1944, Showalter’s company of 170 men suffered 35 fatalities, with 87 wounded.

“That many in one day!” he said. “You just don’t realize how many people was killed.”

Many of Showalter’s friends died. “You can’t realize what it was like to have somebody that you was in school with and have to say, well, he got killed. You know?”

Showalter recalled how scared he was. “Well, you talk about maximum fear. You just can’t imagine what it was like when you laid down somewhere at night. You still thought, ‘well, a shell could come in,’ this or that,” he said.

“It was just like that all the time, just scared to maximum fear that you was going to get killed,” he said. “We wasn’t in combat for much less than a year, but that’s long enough to be scared like that.”

Returning from the war, Showalter said, was not difficult.

“We were all ready for that day,” he said.

He met his late-wife Alda Riggleman through a group of friends soon after the war.

“Alda was one of the real good friends that I got to know,” he said, eyes twinkling. They married and had a son and a daughter.

When he returned from service, Showalter worked as an electrician for 58 years. He also started a local chapter of the Veterans of Foreign Wars with his cousin in his former high school. He wanted to make sure his children had a good life.

“I consider myself one of the luckiest people alive to call that man my daddy,” said Tana Showalter, his daughter. Everyone who knows him would agree, she says.

“Whenever my nephew gets into tough spots, he asks himself, ‘What would Grandad do?’ and that just tells you what kind of man he is,” Tana said.

“I’m very proud of him,” said Showalter’s son, Tommy. His father being a veteran means a lot to him, “though I’ve definitely heard a lot more about it now that he’s in his 90s.”

Tommy said his father did not talk about the war often while Tommy was growing up, though Showalter would tell an occasional story.

“Growing up, he was just Dad,” Tana echoed, saying Showalter was never shy about his stories when he told them. “Whether they were good or bad, he told them like they were,” she said. “There was one story of his buddy getting near blown in half.”

Tommy recalled a Christmas Day story, in which enemy parties met on a hill and agreed to stop fighting to celebrate Christmas together instead. “They went down the hill, and the next time they met, they were fighting each other.”

Thinking back on the war, Showalter said it’s hard to be philosophical about something that caused so much death.

“You know, I think there ought to be some kind of an international deal that would prevent a country from declaring a war, or from participating in one.” Millions of people died in the war, he said, from all sides involved. “I presume it’s possibly a way for the population of the world to be controlled, and maybe that’s God’s way of controlling civilization. I don’t know.”

Now, as one of the dwindling number of Americans who saw the horrors of World War II firsthand, Showalter spends much of his time looking to the future and boasting about his two-year-old great-grandson, Easton.

“He is just as lively as he can be. He just can’t stand still,” he said. His face lit up. “Thinking of my great grandson, I just hope that things get so that it will be a pleasant pleasure to live.”