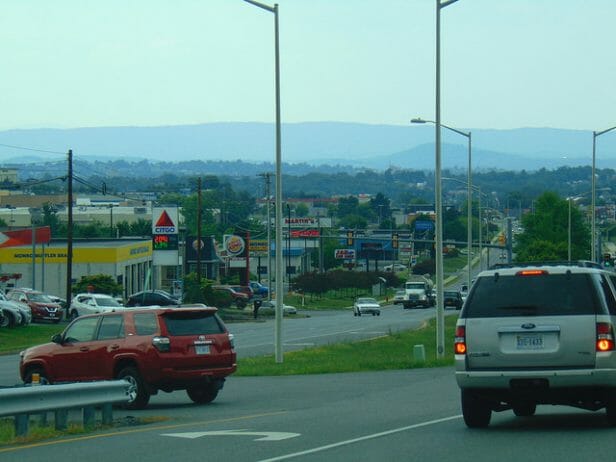 Shop or work? Yes. Live or walk? Not so much. Harrisonburg’s soon-to-be adopted comprehensive plan emphasizes mixed-use zoning, a philosophy contrasting with previous approaches to city development. Photo by JJBers,

Two years’ work by four committees and many meetings later, Harrisonburg very nearly has a new comprehensive plan. It emphasizes mixed-use zoning––areas that combine residential and other uses, allowing people to live, work, shop and play in the same neighborhood––and was the subject of a public hearing before city council on Tuesday night.

While the plan was met with some criticism from city residents about transparency and community inclusion in its development, a final vote to adopt it is scheduled for the Nov. 27 council meeting.

In the same spirit, the council unanimously also voted last night to rezone several city properties for mixed use, allowing townhomes, apartments, retail and office space to be developed in the same areas.

Presentation of the comprehensive plan

In her presentation of the comprehensive plan, City Planner Thanh Dang told council that mixed-use areas could be as small as a city block or as large as a whole neighborhood, and are consistent with other ideas in the plan like, bicycle and pedestrian improvements. In the new plan, mixed-use areas rise to almost 1400 acres, up from just over 200 in the current plan, adopted in 2011.

Dang also noted that the plan also recommends designating the entire city as an urban development area, a classification for areas deemed appropriate for higher-density construction.

“Each area is unique––each street is different––we could look at new zoning or amended zoning to do a good job with redevelopment for mixed use,” she noted.

Henry Way, chairman of the Harrisonburg Planning Commission, told the council that the plan had been developed through a deep, collaborative process, with over fifty people involved in committees.

“We had rich discussions looking at the particular parts of the plan,” he said. “It makes us confident to present a collective vision.”

During the public comment portion of the hearing, some disagreed. One speaker noted that he felt that although he’d been to every public meeting and tried to express input, the results seemed pre-determined from the start and that many good ideas were ignored by those on the committees. Another speaker criticized the plan for not taking changing technology into account.

“Harrisonburg could be a smart city,” said Jeff Lebowitz, a retired corporate strategic planner. “Build around technology and integrate systems.”

Mayor Deanna Reed said that she understood the frustration about not feeling heard. “There were 120 applicants, only certain people get picked to be on committees,” she said. “I get that frustration. The leadership of Harrisonburg is different now. There are more voices being heard, but I understand where you are coming from that only certain people are considered.”

Councilman Richard Baugh emphasized that the comprehensive plan serves as a guide and starting point for the city. Councilman Chris Jones took the point a little further: “There is a false narrative that this is code,” Jones said. “It is not…I think sometimes our perception gets skewed.”

In a statement responding to the plan, the Shenandoah Valley Bicycle Coalition said it is “heartened to see the expansion of mixed-use areas around the downtown core and believe that increased density is important as our city continues to grow so residents can choose to live in areas where walking and biking are safe and comfortable.”

The coalition also cheered the prioritization of greenways in the plan, which it said will allow the city to develop an “interconnected, accessible network of park and recreational facilities.”

Weighing in on public engagement in the comprehensive plan’s development, Planning Commissioner Brent Finnegan said he hopes that all voices are heard as Harrisonburg becomes more diverse. He noted that while it’s hard to capture so many perspectives in one cohesive plan, those involved tried to make it as representative of as wide a swath of city residents as they could.

“It’s the voice of a lot of work by a lot of people who care deeply about this city,” Finnegan said.

The final approval of the plan is scheduled for the November 27th council meeting.

Approved zoning projects in line with the larger comprehensive plan

Two rezonings also on Tuesday evening’s agenda were in keeping with the city’s growing emphasis on mixed-use development. One of them, involving the former Big L properties on West Gay and North Liberty streets, involves a planned redevelopment into townhouses, retail and office space, and apartments.

Another rezoning request, for a property near the former Big L site where the city recently identified building code violations and illegal housing units, was to allow for single-family housing, office space or other non-commercial uses.

A third rezoning for the Community Services Board on North Main Street was requested to help redevelop the campus, expand the building and add more parking to meet the needs of the community.

“When we can do more on the north end of town,” said Councilman Jones, “Bringing more bodies to live, work and play there…That’s the best economic driver. It’s a step in the right direction from the mistakes fifty years ago in urban renewal.”

Councilman Ted Byrd noted that he was happy to see private sector stepping in and making a difference in the community.

All rezoning requests were voted unanimously to adopt by city council.