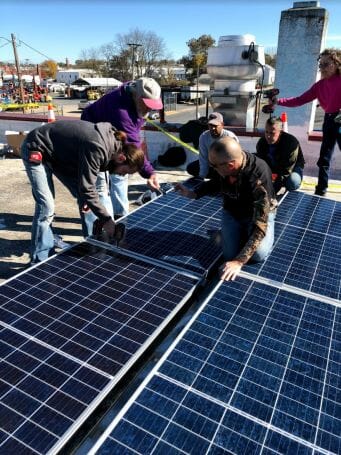 Last Thursday, a crew of volunteers gathered at Our Community Place downtown to help install 17.4kW worth of solar panels on the roof. It was the latest example of a local “solar barn raising” – a modern take on the traditional many-hands-on-deck approach to barn building in some Mennonite and Amish communities.

Harrisonburg has often been ahead of the curve when it comes to solar energy in Virginia. A 104kW solar array built at Eastern Mennonite University was, for a time, the largest in the state when it was built in 2010. Since then, installation of solar panels has accelerated, resulting in a current installed solar capacity of just over 1MW (1,000kW) in Harrisonburg.

Just two weeks ago, the city council made a major commitment to prioritizing renewable energy by verbally endorsing the Environmental Action Plan prepared by the city’s Environmental Performance Standards Advisory Committee. One of the plan’s many sustainability targets is to, by 2025, “expand the mandate of HEC [Harrisonburg Electric Commission] to include renewable energy.”

For the moment, HEC’s guiding mission is to provide “affordable and reliable” electricity to the citizens of Harrisonburg – and using price as a metric, it has been wildly successful. “Right now, for last year and this current year, we have the lowest residential rate in the state of Virginia, and have always been in the top two or three for as long as I can remember,” said Brian O’Dell, HEC’s General Manager. Right now, one kilowatt-hour of electricity costs about 10.5 cents for residential customers in Harrisonburg.

But as behind-the-meter solar generation in Harrisonburg continues to rise, “affordable” and “renewable” may become conflicting priorities because of how HEC – and most other utilities – structure their rates.

“Historically, we’ve recovered fixed costs through kWh sales,” said O’Dell. “When you start eliminating a portion of that, the fixed costs to some degree are not going to be covered by the customers that are net-metered.”

With that in mind when it first adopted a net-metering policy in 2010, HEC set a net-metering capacity threshold of 1 percent of peak load – based on guidance from the state – at which point it could reevaluate the impact of that solar energy capacity on the utility’s recovery of its fixed costs. With a peak load of around 145MW, that 1-percent threshold is 1.45MW; with the city’s installed solar capacity already over 1MW, that 1-percent threshold is rapidly approaching. 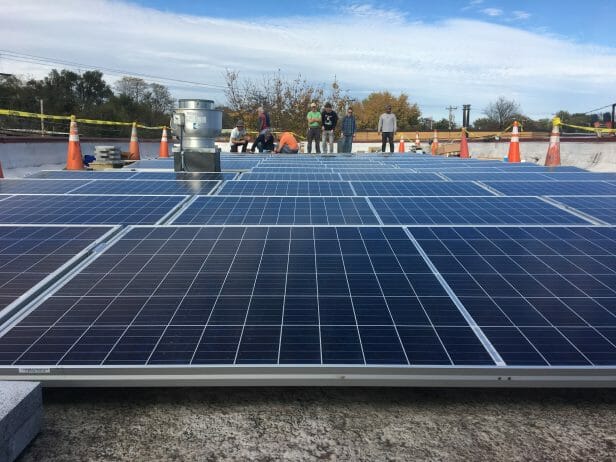 Last Thursday, the city moved 17.4kw closer to the 1.45MW threshold that HEC has set for reevaluation of its net-metering policy. Photo by Eric Beck.

While HEC begins to discern what changes, if any, may occur after the 1-percent threshold triggers a reexamination of its net-metering policy, solar generation in Harrisonburg continues to grow. OCP’s 17.4 kW project was funded in part by Give Solar, a new startup that connects local non-profits with the funding to front solar projects. The group has already been involved in the installation of the 107kW array at Gift and Thrift, and, going forward, hopes to do similar projects twice a year. Give Solar Program Coordinator Jeff Heie said one reason the group is focused on non-profits is because they are not able to take advantage of solar tax credits, like businesses and homeowners can, and often don’t have the resources to front the steep overhead cost of a solar array.

For HEC, maintaining affordable rates for its customers is critical. “Not everyone can even afford the rates that we have today,” said O’Dell. “That’s not saying we’re not concerned as a whole about renewable energy, but we’re also concerned about low rates. And we have to balance that with our renewable initiatives.”

Given the 2017 United Way study that found that more than 60 percent of Harrisonburg’s population falls meet the ALICE (Asset-Limited, Income-Constrained, Employed) criteria for economic vulnerability, O’Dell’s concerns appear well-founded. For more than half of the city’s population, any rise in electric rates could be significant – and the high up-front costs make solar generation an impossibility for many.

Heie notes that Give Solar’s work with local non-profits is a way to begin distributing the benefits of behind-the-meter solar generation to those in town who can’t afford it themselves. “The idea behind it is, these non-profit organizations in our community are really important,” said Heie. “They’re a safety net for the most vulnerable in our communities, and solar is a great way for them to reduce their costs, and better carry out their mission of serving the most needy in our community.”

O’Dell agrees that there are ways to usher in an era of renewable energy that are also equitable. “There are certainly some benefits on renewable that we would like to provide to our customers,” he said. “We just have to find the right way to do it, for the benefit of all, and not to the detriment of any.”

“We have to look out for all of our 21,000 customers, and not just those that want to net-meter,” O’Dell added.