There’s broad agreement that I-81 is broke and needs fixin’ – but how to pay for it? 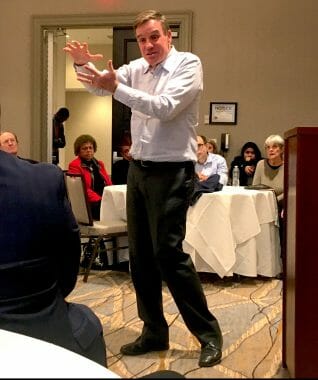 I-81 was one of many issues Sen. Mark Warner discussed during a Saturday afternoon stop-off in Harrisonburg.

U.S. Sen. Mark Warner said Saturday his Bridge Act – a bipartisan bill co-sponsored by five Democrats and five Republicans – could be one way to come up with funding to address a stretch of interstate chronically interrupted by snarled traffic: the section of I-81 through Virginia. The legislation would create a new infrastructure financing authority that would make it easier to use private capital on major highway projects.

“It is a harm to our economic development, it is a harm to personal safety,” Warner said of I-81’s snarled traffic. “And the truth is, to get it fixed, to get it repaired, it’s going to take money.”

On Saturday afternoon, Warner, a Democrat, swung by the Hotel Madison for an hour-long talk on everything from passing a federal budget to the “really dark underbelly” of the modern social media landscape. But one of the more Harrisonburg-specific issues that got plenty of attention was fixing I-81.

Stretching for 325 hilly, curvy miles through western Virginia, I-81 is one of the most important commercial arteries on the East Coast. VDOT estimates that 11.7 million trucks carrying goods worth $312 billion travel the highway through the state each year. Add in a bunch of passenger vehicles and there’s a perfect recipe for what VDOT calls “incident-related delays” – those bumper-to-bumper, steering-wheel-pounding traffic back-ups that stretch for miles behind a crash.

About 30 times a year, VDOT says, crashes keep one or more lanes blocked for more than six hours.

From 2013 to 2017, there were 534 crashes on the interstate between exits 240 and 251, on either side of Harrisonburg city limits, according to VDOT. The biggest crash hotspot in that section is on the northbound side, between mile markers 243.5 and 244.5, approaching the JMU/Port Republic Road interchange from the south, with 52 accidents over that five-year stretch.

“It’s an issue that’s been building up for quite a while,” said Frank Tamberrino, president and CEO of the Harrisonburg-Rockingham Chamber of Commerce. “There’s definitely a need to make 81 a smooth-running interstate versus a hit-or-miss one”

While different local businesses are affected differently by congestion on I-81, Tamberrino said, there is growing concern among the business community up and down the entire corridor that disruptions and delays along I-81 are affecting the region’s economic competitiveness.

As Warner pursues solutions at the federal level, the state has just come up with a plan of its own. It has an initial price tag of $2 billion, to fund targeted improvements like spot widening, extra climbing lanes and longer merge lanes in specific problem areas. That comes from a recently-completed VDOT study and report that will be considered early next year by the Virginia General Assembly. (First, though, the Commonwealth Transportation Board needs to sign off; it will formally consider the report next month).

In Harrisonburg itself, the VDOT report recommends widening the interstate to three lanes in each direction along nearly the entire stretch of highway through the city. The only other Harrisonburg-specific recommendation is improved signage on alternative routes like U.S. 11 and U.S. 33 to help direct traffic during detours around accidents.

An image from the VDOT report showing proposed I-81 improvements in Harrisonburg – primarily, one extra lane in each direction through most of the city.

The VDOT report presents two possible alternatives for funding that initial $2 billion in targeted improvements. One involves a regional sales-and-use tax increase of 0.7 percent and a 2.1 percent regional fuels tax that, together, would generate an estimated $165 million per year for I-81 improvements. A second alternative involves a smart tolling approach, with vehicles paying variable rates – higher during the day – to encourage more off-peak use of the road. That approach may also involve an annual pass options for commuters, allowing them to pay a modest annual fee in exchange for unlimited use of the road.

VDOT’s recommendations are simply advisory, and it will fall to the General Assembly to decide if and exactly how to move forward with a solution.

Whether through taxes or tolls, generating new revenue isn’t a politically simple exercise. During his appearance in Harrisonburg, Warner emphasized the importance of local leaders supporting a specific solution, and moving past the simple consensus that there’s a problem.

“The business community is where this leadership is going to have to come from, but you gotta get get your folks to come sign onto a plan,” he said. “[Saying] ‘I’m for something’ isn’t going to cut it.”