The next election season has already begun. Last week, Harrisonburg resident Brent Finnegan announced his campaign as a Democratic candidate for the 26th District seat in the Virginia House of Delegates. In his campaign announcement video, Finnegan focuses on what he calls “kitchen table” issues, including the rising cost of healthcare, overcrowded schools, and paychecks that can no longer pay the bills.

“Wages haven’t kept up with the cost of living, and people are falling further and further behind,” said Finnegan. “The ALICE report really puts into numbers what we’ve been seeing over the last couple years, people needing to work two or three jobs just to maintain a standard of living.”

This will be Finnegan’s second campaign to serve in the House of Delegates. This time around, he says, his campaign will concentrate on achieving a living wage for Virginia workers – something he heard “over and over again” from prospective voters during his first campaign in 2017. “This issue does not affect any one political persuasion. We all need to be making an honest living for an honest day’s work,” said Finnegan. He pointed out that Missouri and Arkansas, two traditionally red states, recently raised their minimum wages as a result of 2018 ballot initiatives.

The 26th District includes all of Harrisonburg plus much of northern and western Rockingham County, with voters roughly equally split between the city and county. In 2017, Finnegan easily won in Harrisonburg, with more than 63 percent of the vote, but lost in the Rockingham County portion of the district by an even more lopsided margin. He earned 45 percent of the total vote, losing to Republican incumbent Tony Wilt, who has held office since 2010.

Wilt was first elected in a special election in 2010, and has consistently run on a platform of economic growth through lower taxes. He was unopposed in 2011, 2013, and 2015.

“Generally speaking, my top priority has and continues to be supporting policy that allows for economic opportunity for all citizens through low taxes, a reasonable regulatory environment that does not unduly hamper success and an education system that meets the job and skill demands of the 21st century,” Wilt wrote, in an email.

Thea Litchfield Campbell, chair of the Rockingham County Democratic Committee, said Finnegan offers an important alternative. “In unopposed races, nobody wins,” she said. “Having Brent be so involved in the community in so many different ways truly opens up a different sort of conversation, where Brent is able to present himself as being there for people, whether he’s your delegate or not, and to give him the ability to amplify our voice in Richmond would be just an amazing thing that I currently see as kind of lacking.”

Litchfield Campbell noted that the county committee cannot endorse Finnegan until after the primary election, but added that she is “very excited about his candidacy.”

While he’s also concerned about Rockingham County’s working poor, Wilt has a different take on how state policy can help struggling workers. “I know some feel new government mandates on citizens and the private sector can be used as a means to boost those that may be struggling, but the practical effect of such policies are a net negative for low and middle income earners,” he wrote. “I believe the better path is to remove barriers to opportunity, rather than creating more.” 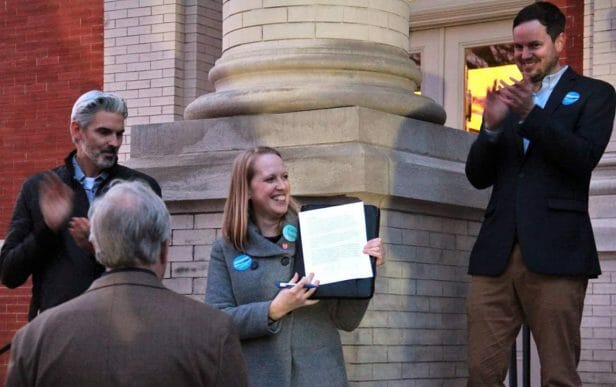 Litchfield Campbell said that the living wage issue is primarily about giving working families the ability to “make it” without relying on assistance. “One thing about Rockingham County – we are hard-working, very proud people. People don’t want handouts, people don’t want to be saved, they want a chance to work for themselves, a chance to fight for what they believe in, rather than just expecting someone else to do it for them. And Brent’s really good about helping people use their own voice to be heard, and that’s one thing I really respect about him.”

Finnegan has pledged to accept no donations from corporate PACs or industry interest groups. “We’re relying entirely on small dollar contributions from people that live in the Shenandoah Valley,” he said. “It’s hard to compete with corporate money … you need money to make a campaign work, but that needs to be honest money.”

“Policy can be negotiable, but the one thing that is not is values,” Finnegan continued. “I’m pretty firmly rooted in the values of taking care of our neighbors, treating others as we want to be treated, [and] being good stewards of the environment, and it feels like we’re at a point where none of those things are happening.”