By Andrew Jenner and Ryan Alessi

Community members, led by the local NAACP chapter, will rally at Court Square at 1 p.m. Thursday to call for answers about Harrisonburg Police officers’ handling of the break-up of a party early Sunday, which led to officers using their tasers on a woman multiple times before arresting her.

One of the partygoers captured the encounter on video and circulated it on social media. Because the women who hosted the party are black, the incident has raised fresh questions about police relations with people of color, and prompted concerns among NAACP leaders and other city residents over how the response to a noise complaint could escalate so dramatically.

“It brings chills down my spine because I could hear the fear in their voices,” Monica Robinson, president of the Harrisonburg Rockingham NAACP, told 17 community members Wednesday night who attended a meeting at the Golden Pony to discuss it.

Those attending the meeting — including Nina Bradley, whose wife, Melissa Duncan, was the woman who was tased and arrested early Sunday — outlined the questions they have. And they began mobilizing to try to get answers about what led up to Duncan’s arrest, why five police officers responded to a noise complaint, and why they chose to use tasers.

That first step is Thursday’s rally on Court Square where organizers, including leaders of the Harrisonburg-Rockingham Democratic Socialists of America, plan to circulate a petition asking the police department to investigate the officers’ handling of the incident.

English, in an interview with The Citizen earlier in the week, declined to discuss the specifics of Duncan’s arrest but said anyone who feels they were treated unfairly can file a complaint.

Bradley said Wednesday night she had not taken that step. But Robinson said the NAACP can help her with that.

“I think we should file a complaint,” Robinson said. “The level of aggression that we see used on that video did not match the situation at hand.”

The knock on the door came soon before midnight Saturday, recalled Bradley, who was hosting a kickback––a low-key party––at the apartment she and Duncan share in North 38.

At the door was a police officer telling her to turn the music down.

Bradley said she believes someone she’d specifically disinvited from the party called in the complaint. Still, she said she complied with the officer’s request.

But soon after midnight, she says, the police returned, asking her to sign a noise violation. Bradley said she told the officers she was being racially profiled. She disagreed that the music was too loud and said she believed summonses were issued at other parties in the housing complex after the third, not the second, strike – but reluctantly signed the paper.

Shortly thereafter, she said, she noticed the police were still standing outside her door and went out to ask them if there was any other problem. Moments later, she was being arrested, with several officers pushing her back into the apartment and tackling her onto the floor.

“One of them had me in such a tight chokehold that I felt myself start to fade out,” Bradley said on Tuesday afternoon.

Micah Edmonds, the third roommate who shares the apartment with Bradley and Duncan, said so many police responded that cars lined the block and even K-9 units responded.

Video, recorded by another person, shows the confusion:

While Bradley was being held down on the floor, Duncan approached and was tased several times, according to witnesses and partially captured on the video.

Police charged Duncan with several crimes, including two felony counts of assaulting a police officer. She is being held in jail without bond.

Bradley was charged with obstructing a police officer, a misdemeanor, and released on Sunday.

“There’s so much stuff we could lose,” said Bradley, who was recently homeless for several months.

Because an extended jail stay could result in Duncan losing her job, Bradley worries that they’ll lose the apartment the two only recently moved into.

“You guys are causing more harm than you know,” she said, referring to the police.

Reactions to the video

English, who joined Harrisonburg’s police department as chief this summer, said on Tuesday that he was aware of the weekend incident at North 38, but declined to comment on it until adjudication of any criminal charges or resolution of any citizen complaints. He said no complaints about the incident had been filed with the department.

The Citizen has requested police reports from the incident but had not received a response as of 11 p.m. Wednesday.

Regarding video of the incident, English asked the public to “understand that that’s 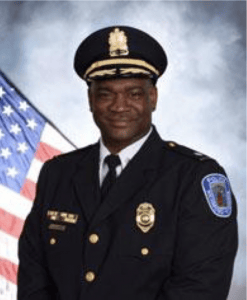 just a snippet of what actually took place at that location.”

He also told The Citizen that while officer body camera footage of the incident exists, it wouldn’t be “in the best interest of those that were involved” to release it.

For Raquel Williams, the incident was personal. Her daughter was at the party and says she was pushed to the ground by a police officer as she attempted to film the chaos in the apartment.

Williams, who helped organize Wednesday’s community meeting, said the video was a particularly frightening example that fits a larger pattern.

“[The police] don’t approach us – people of color – with respect,” said Williams, a member of the local NAACP chapter. “They don’t talk to us the same way.”

“I want [the officers] to be reprimanded. I want some in-depth training on these kinds of situations,” she continued. “I see this situation that hits close to home, I think, ‘It has to be stopped now before something else happens that’s worse.’”

Chief English told The Citizen he hasn’t gotten the impression that the department has a strained relationship with people of color in Harrisonburg.

“I have not gotten that sense from people that I’ve talked to in the community at all,” he said. “I would welcome a conversation with that individual.”

English said he takes any allegations seriously and is open to conversation with anyone who feels that his officers have acted inappropriately.

“If there’s something that you feel like officers did were improper, I strongly encourage you to file a complaint,” he said.

Robinson, president of the Harrisonburg Rockingham NAACP, said she knows of past incidents in which individuals have tried to file complaints with the police department but have been turned away. She said those instances were during the tenures of previous police chiefs, and she wants to give English an opportunity.

At Wednesday’s meeting, Bradley recounted the events for those who attended before showing the video on a screen in the Golden Pony’s basement.

Several people said the department owes the community — and Duncan and Bradley, specifically — an explanation about why so many officers responded, why they came into the apartment and why three officers held Bradley down before using the tasers on Duncan.

“What’s the difference in the treatment that you received if you were a white JMU student? I don’t believe there would have been three cops on you,” Robinson told Bradley at Wednesday’s meeting after Bradley recounted the events.

John Butler Jr., the NAACP’s vice president, said getting those answers is a first step in accountability.

“That’s the goal. Those officers need to be held accountable for their actions,” said

Paul Somers, the Golden Pony’s owner who also participated in the meeting, said all Harrisonburg residents should be asking for that as well.

“It’s easy to share stuff on the Internet and Facebook thousands of miles of away about social injustice and racial issues,” he said, adding that this instance is an opportunity for Harrisonburg residents to effect change in their own backyards.

“But people who look like myself,” said Somers, who is white, “have got to be able to do it in this city, in this town, with this police force.”