After city council elections, school board setting groundwork for new high school to open one year earlier than previously decided 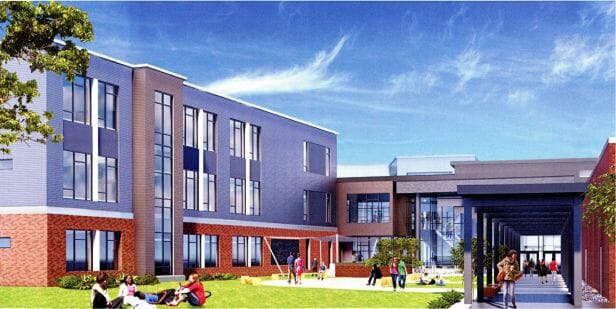 A conceptual rendering of the student entry to the new city high school. Image by Grimm + Parker, courtesy of Harrisonburg City School Board.

With the city’s population continuing to increase and high school enrollment projected to grow around 11 percent from current levels by the 2021-22 school year, the Harrisonburg City School Board is preparing for the possibility that construction of a new high school might soon get fast-tracked. Although the school board had originally presented plans to open a new high school by 2021, city council voted almost a year ago to take a slower approach, opening in 2023.

But after Sal Romero and Chris Jones––Democrats whose campaigns supported earlier construction of the high school––won the city council race in November, the school board has begun behind-the-scenes work to make that possible.

“We’d really like to push it up a year because of the pressures of enrollment on the high school,” says School Board Chair Deb Fitzgerald.

In December, the board asked its architectural firm, Grimm + Parker, to calculate the costs of building the high school by 2022. Previously, the firm––which has been selected but not contracted for the school’s construction––had provided a quote of $76 million to complete construction by 2021. The board anticipates an updated construction estimate for 2022 completion will be somewhat higher.

The board hopes to have Grimm + Parker’s new quote by early January. Next, it will provide that revised estimate to the public and city council. If available, the figure will be shared at the school board’s televised meetings scheduled for January 7 or 15. 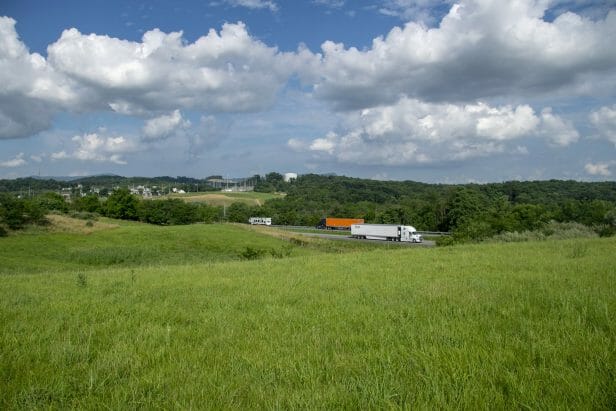 The view looking east across Interstate 81 from the 60-acre property where the second city high school will be built. Photo by Joe Fitzgerald, courtesy of Harrisonburg City School Board.

Romero, who will take office on January 2, says he plans to introduce a motion to accelerate construction during his first month in office.

“I look forward to working with everyone on city council to open in 2022,” he says. “The original proposal was to build by 2021. I want to bring it back at least a year. 2023 is too far from where we are, as far as the needs. Moving up [construction] a year will allow students the opportunity to have a place and space to go.”

The school board considered opening the project to bids from additional architectural firms, but ultimately decided against it.

“We were concerned that if we ran the process all over again, it would push the timeline back so that we couldn’t open in 2022 anyway,” says Fitzgerald.

In anticipation of council potentially moving up the high school opening to 2022, the school board is also starting to work on logistics, including considering traffic patterns, infrastructure, and rights-of-way for the 60-acre property located between South Main Street and I-81.

This article was updated to correct the name of the architectural firm designing the new high school.