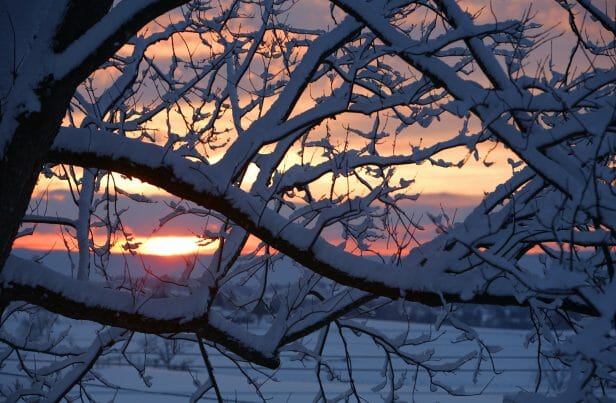 Sunrise shines through a snow-covered tree in Rockingham County after a January 2011 snow storm.

“A forecaster’s nightmare.” That’s how WHSV Chief Meteorologist Aubrey Urbanowicz describes the storm that struck the Valley on Dec. 9, with an intense band of snow dumping up to 18 inches over southern Augusta County but merely dusting northern Rockingham and southern Shenandoah counties.

While the Harrisonburg forecast on Dec. 8 called for an inch or less, the city ended up with 2.75 inches; some parts of Augusta County that received 18 inches were forecast to receive just 1 to 3.

“Sometimes the forecast is a big bust, like the horrible snow we got in December,” Urbanowicz recalled weeks later. “There was a 15-inch difference in the snow totals within forty miles. That’s the humbling part of being a meteorologist. You’re still trying to predict the future.” 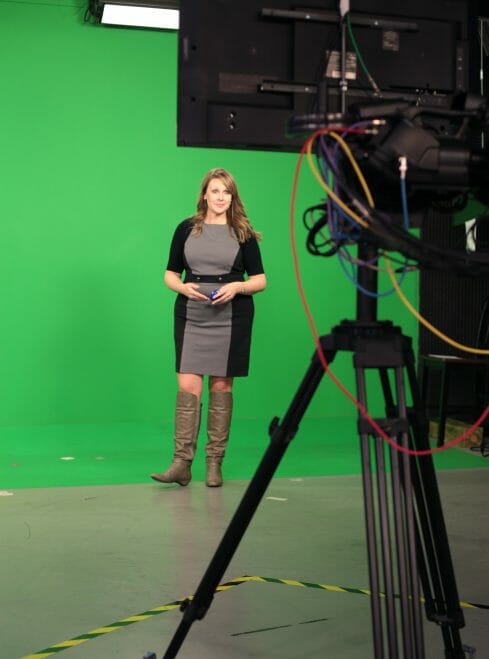 Urbanowicz stands in front of a green screen that allows a weather map to be digitally placed behind her during the broadcast.

Urbanowicz used the storm – the most challenging she’s ever forecasted in her eight years at WHSV – as a teaching moment. The following day, she published a story on the station’s web page explaining why her forecast was so far off for many of her viewers. Urbanowicz sees that type of communication as an important aspect of her job.

“Often times I drive home thinking, ‘Could I have communicated the situation better?’” she said.

In that December 10 post Urbanowicz told her viewers, “As good as weather forecasting has gotten, it’s not an exact science. It never will be. And there are still extremely difficult challenges with this.”

That statement is a perfect summary of contemporary weather forecasting according to others in the meteorological business.

“Over the last few decades accuracy [in forecasting] has increased considerably,” said Dr. Stanley Ulanski, who taught meteorology at James Madison University for four decades and spent time as a meteorologist in both the public and private sectors. “Where the forecast used to be only accurate for maybe a day they’ve increased now to three days and, in some cases, out to five days.”

According to the National Oceanic and Atmospheric Administration, a five-day forecast can be expected to be right 90 percent of the time. For Urbanowicz an accurate forecast is one that correctly predicts the day’s high and low temperatures within three degrees.

The public’s perception of how often meteorologists get it right is a matter of perspective, Ulanski said. Twenty-four hour cable weather channels and Internet forecasts that change minute-by-minute have impacted people’s judgement of what accuracy in meteorology is.

“If they’re forecasting for snow and the temperature increases slightly just above freezing and it turns out to be rain, then most people think the forecast is totally wrong,” he added. “Well it wasn’t totally wrong in the fact that there was precipitation.”

Urbanowicz pointed out to her viewers that while the snow totals in her Dec. 9 forecast weren’t exact, the overall forecast held true.

“The impact of the storm remained the same,” she noted.  “If you remember earlier in the week I said, get where you need to be Saturday night because I highly recommend not driving Sunday, especially south of about Augusta County. The roads were always expected to be the biggest impact, which they were.”

Urbanowicz said that most of her viewers understand how forecasting works and are appreciative of how accurate WHSV’s forecast typically is.

“I’ll get an e-mail that says ‘You said it was going to be sunny and it was. Thanks for doing a great job.’ If I didn’t have that I probably wouldn’t still be doing this job,” said Urbanowicz, whose work earned her the Associated Press Award for Outstanding Effort by an Individual Weathercaster in 2014. “I have colleagues that work in other areas and many don’t get that kind of feedback.” 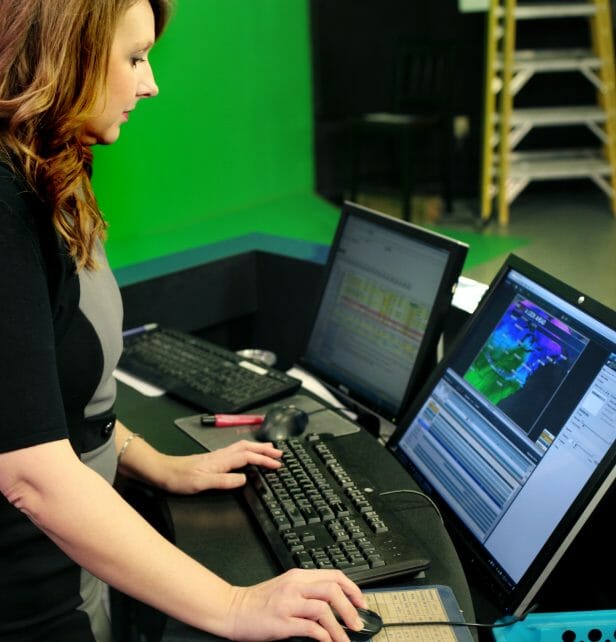 Aubrey Urbanowicz has been a meteorologist with WHSV for eight years, the last three of them as chief meteorologist.

If there’s anything that people misunderstand about meteorologists, Urbanowicz said, it’s how much work goes into the job.

“I don’t just roll in at 4:30 and put on a show. I’m a skilled scientist with years of study,” she explained. “The forecast starts when I wake up. I look at the current conditions. I’m in the office at 2:30 and begin to assemble data from several different models into the forecast.”

Weather models are computer-based mathematical equations into which meteorologists enter data, such as current temperature, air pressure, humidity and wind speed, to create a prediction of how weather will behave in the future.

“Meteorologists have some of the most powerful computers in the world,” Ulanski said. “The problem is not the models themselves. The problem is the data you put into the models. If the data is sparse or not dense enough, then the model can only take that data to a certain place.”

“This was an extremely difficult forecast and the problem was that we had very little information even in the days leading up to Sunday,” Urbanowicz said on the Monday after the December 9 storm. “The exact track was going to make or break this storm and a slight shift was going to mean the difference between getting absolutely nothing, and getting slammed with snow. Some of us ended up getting slammed with snow.” 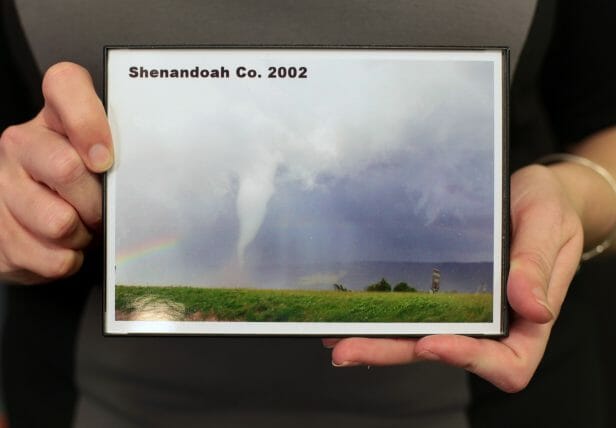 Among Urbanowicz’s photos near her desk of memorable Shenandoah Valley weather events is this shot of a tornado touching down in Shenandoah County.

The topography of the central Shenandoah Valley, especially the mountains and smaller hills, can make approaching storms harder to predict, Urbanowicz said. Part of her job is learning the area’s weather patterns and taking lessons from the outcomes of previous storms. A Connecticut native, Urbanowicz has made the study of the Valley’s weather history an area of special focus. The wall by her desk is decorated with photos, including a tornado that formed near Winchester in 2002, flooded streets in downtown Harrisonburg in 1949, and the infamous 1962 Ash Wednesday storm that lasted for three days, dumping feet of snow in the Valley.

“My goal is to give the best forecast I can with the best information I have,” said Urbanowicz, who is one of four meteorologists employed by WHSV. “Meteorology has gotten so good that people’s expectations are high.”

“On to the next storm,” she declared at the conclusion of her December 10 post. With the forecast, as of Thursday night, calling for 4 to 8 inches of snow on Saturday and Sunday, it looks like that storm is here.