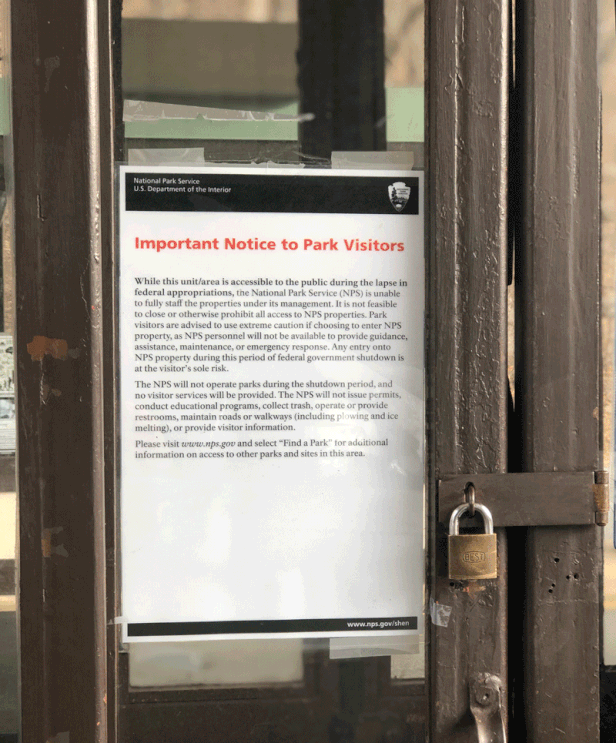 A sign at the ranger station at the Swift Run Gap entrance at Shenandoah National Park explains the park’s predicament during the partial government shutdown. (Photos by Bridget Manley)

The partial government shutdown, now the longest in U.S. history, means the employees of Shenandoah National Park have been either furloughed or had to work without pay for 25 days and counting.

The park employs about 200 people.

While the park is open to the public, only a few bathrooms are open. Meanwhile, no services or help would be available if someone gets hurt or stranded on the mountain. The park website tells people to call 911 for help.

Currently, the entire length of Skyline Drive is closed because of the weekend snowstorm, according to the recorded message on the park phone line.

Greta Miller, executive director for the Shenandoah National Park Association, said the shutdown hit after some park attractions and amenities already closed because of low visitor turnout and the cold weather.

The association manages the bookstores in the two visitor centers, Dickey Ridge Visitor Center and Byrd Visitor Center.  They sell educational items that help visitors learn more about the park’s natural and cultural history, with profits supporting interpretative and educational activities in the park.

But the longer the shutdown goes the greater the risk of long-term effects.

While seasonal staff were already laid off for the winter months, she said she’s worried that if the shutdown stretches into the end of January, they could start seeing loss of revenue.

“If we don’t open this weekend through the rest of January – we could lose possibility around $5,000 – but that’s only if we don’t get any snow or ice which would cause the park to close completely,” Miller said. “So the impact on SNPA has not been of any substance at this time.  If it lags on into April and the summer months, then [we] will have an effect.”

Several park employees, both furloughed and working without pay, declined interview requests from The Citizen because they were not authorized to speak to media. 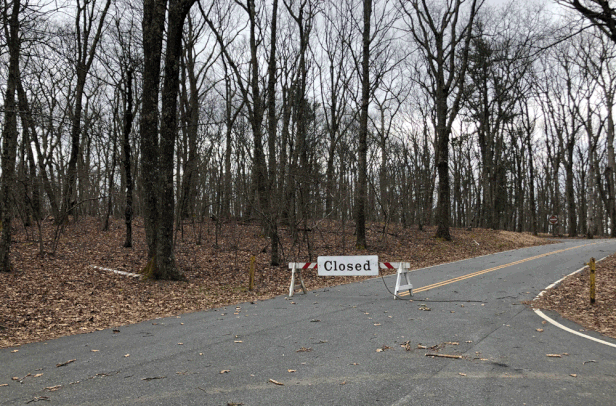 One sign guards a closed campground at Lewis Mountain in Shenandoah National Park.

Susan R. Sherman, executive director of The Shenandoah National Park Trust told The Citizen that the trust is using money raised in the community to keep a few bathrooms on Skyline Drive open to the public.

“Shortly after the shutdown went into effect and toilet facilities in Shenandoah National Park were being locked due to unsanitary conditions, the Shenandoah National Park Trust made a commitment to keep the Port-A-Johns at Old Rag and Whiteoak Canyon trailheads open and clean,” Sherman said.  “Even now that parks have been ordered to use their entrance fee funds to clean bathrooms and haul trash, the trust has committed to keep paying for these services at Whiteoak and Old Rag, thanks to emergency funding we are raising from concerned citizens.”

For the people who work in and around Shenandoah National Park and the George Washington National Forest, working without pay or being furloughed is a hard pill to swallow, and many are worried about programs and plans for the spring should the shutdown continue.

Concerned citizens are always looking for ways to help, said Sherman from the Shenandoah trust. “We are also fielding regular inquires from local residents about how they can help with cleanup in the park,” Sherman said. “And we’re telling them that checking out trail heads around the park.”

Media reports nationally about other national parks being vandalized and littered with trash and human waste prompted fears among area residents that Shenandoah National Park would experience the same. Some have been driving into the park and performing clean-ups on the weekends, said Alleyn Harned, executive director of Virginia Clean Cities.

Harned and his team went into the park two weekends ago armed with trash bags and grabber arms and collected seven large bags of garbage from campsites northbound between Route 33 and Big Meadows on Skyline Drive.

He said he saw others on the mountain that day doing the same, and said that while he’s happy that area residents care deeply about the park, ultimately no one can do what park employees can do.

“It’s the hope of everybody involved that this shutdown is over soon, so that folks can get back to work,” said Harned, who also serves as chairman of the Harrisonburg Democratic Committee. “There’s really no way for volunteers to fill in, and we are very appreciative of all the good work of all the park staff.”