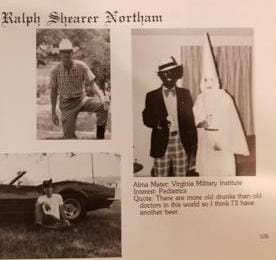 When news broke on the first day of Black History Month that Virginia Gov. Ralph Northam had appeared in a photograph wherein one individual portrayed a Klansman and another was in blackface, I was on a personal pilgrimage to the Jamestown Settlement museum in Jamestown, Virginia. As 2019 marks the 400th anniversary of the arrival of the first enslaved Africans to the shores of Virginia, the purpose of my visit was simple yet meaningful to me: to honor the lives of those “20 and odd” enslaved Africans whose bondage began the peculiar institution of slavery in the United States of America. These would include the first African woman referred to by name in the historical record of the colonial period. “Angela” was held captive by a prominent settler of the English colony of Jamestown.

Entering the Ferguson Lobby, it seemed the white staff and tourists in the vicinity were made uncomfortable by what appeared to be the only African-American present not working for the Jamestown-Yorktown Foundation. This was not a surprise; all of us were almost certainly processing the revelation of our state’s Governor posing for the camera with his face muddied in mockery of the race and ethnicity of 20% of the Virginians he was elected to represent. The just as likely possibility that Gov. Northam disguised himself in the garb of a domestic racial terrorist organization, the Ku Klux Klan, while a student in college at Eastern Virginia Medical School served to heighten sensibilities and intensify an unspoken awareness among museum personnel and guests. That of the four-centuries-old legacy of oppression and exploitation of people of African descent in Virginia by the white men and women who have always dominated and controlled state government.

The bigoted nature and intention of the blackface minstrel tradition has been documented and discussed endlessly since the early days of the Civil Rights Movement. Beginning in the early 1800s as a form of entertainment for white audiences by primarily white actors and vaudevillians, blackface accommodated the obsession that white society had with demoralizing and dehumanizing African-Americans and in negating the Black experience in America. We do our collective common sense a disservice to think that a Ralph Northam of 1984 was not in tune with the racist history of the practice. No better evidence of this conclusion can be found than the fact the person in blackface in the now viral photograph stands beside another in the hood and robe of the KKK.

Initially admitting to being one of the characters in the photo at his own page in the yearbook then backtracking his confession less than 24-hours later, calls for Gov. Northam to resign came from a multitude of organizations and individuals of various political persuasions. Along with the Virginia Legislative Black Caucus, the ACLU of Virginia and the NAACP also requested of Northam to step down. Virginia’s Sen. Tim Kaine, Sen. Mark Warner and Rep. Bobby Scott, respectively, released a shared statement in support of the same. This resignation would come with the ascension to the governorship by none other than Lt. Gov. Justin Fairfax – currently the only African-American to hold statewide office and who also received national media attention recently for refusing to honor Confederate Gen. Robert E. Lee.

Inside the Mary Morton Parsons Foundation Orientation Area at Jamestown Settlement a three-minute video plays on a loop. I watched a second time – just as disappointed with the script the narrator read from as the first. The audio recording promises a discovery of what it was like for English settlers, Powhatan Indians, and West-Central Africans who “bravely struggled to co-exist and survive in the New World.” This is putting rather mildly the genocidal repercussions of European colonization of Virginia on its indigenous peoples and nations. Furthermore, African descendants in Virginia were never confused as to the humanity of the colonists. That would be the Ralph Northams of the New World.

Peaceful co-existence is the very least that a remorseful and evolved American society can provide for Black people on the 400th anniversary of our involuntary sojourn in America. In Virginia, this reconciliation process must begin now with the appointment of Mr. Justin Fairfax to the highest office of the Commonwealth.

Editor’s note: This piece was written before allegations of sexual assault agains Lt. Gov. Fairfax were made public. We have since published a second essay addressing that situation by this same author.

– Mr. Steven Thomas is an organizer with the Northeast Neighborhood Association and co-founder of the Harrisonburg-Rockingham County chapter of Coming to the Table.

Have something to say that you’d like to see published in The Citizen? We invite perspectives pieces from anyone in the community. Check out the guidelines and send us your thoughts.