The Middle River Regional Jail Authority took a first step this week toward expanding its overcrowded facility in Verona, by voting unanimously to hire Moseley Architects to conduct a needs assessment for the jail.

That assessment is part of a “community-based corrections plan” that’s required before a jail receives any state funding for expansion. In 2015, Harrisonburg and Rockingham County joined Augusta County and the cities of Staunton and Waynesboro as members of the regional jail authority, which oversees and funds the jail.

Last fall, with a steadily rising inmate population straining the jail’s capacity, the authority issued a Request for Proposals soliciting bids to begin planning an expansion.

“The trend has been that we’re seeing more [inmates], not less,” Augusta County Administrator Timothy Fitzgerald told The Citizen after Tuesday’s meeting. “We’re looking at options us to be able to expand.”

The move comes as officials warn that overcrowding in the jail is having a ripple effect on the facility’s budget and infrastructure. During Tuesday’s meeting, staff told members of the authority that the jail’s growing inmate population has pushed spending on food, water and electricity significantly over budget, and that added strain on the facility has required expensive maintenance. The jail’s total budget for the current fiscal year is about $18 million. Member jurisdictions, including Harrisonburg and Rockingham County, contribute to that budget based on a three-year average of total of inmate days from each locality.

The board voted on Tuesday to spend up to $64,972 for Moseley Architects to complete the needs assessment. That was the amount Moseley submitted with its bid, although Fitzgerald said the authority hopes to negotiate a lower price.

Moseley Architects was the only firm to bid on the project. The firm also designed the existing Middle River Regional Jail, which opened in 2006.

The needs assessment will include an analysis of the existing jail facility and services, a jail population forecast and preliminary estimates for building and staffing an expansion, and is to be completed by October.

Over the past several years, the inmate population at Middle River has risen steadily. When Harrisonburg and Rockingham County joined the regional authority in July 2015, the jail’s average daily population was 709 inmates.

By the second half of 2018, the average daily population had climbed well over 900 inmates and topped 1,000 last October. Fitzgerald said that at or above 900 inmates, space at the Middle River Regional Jail becomes very tight. 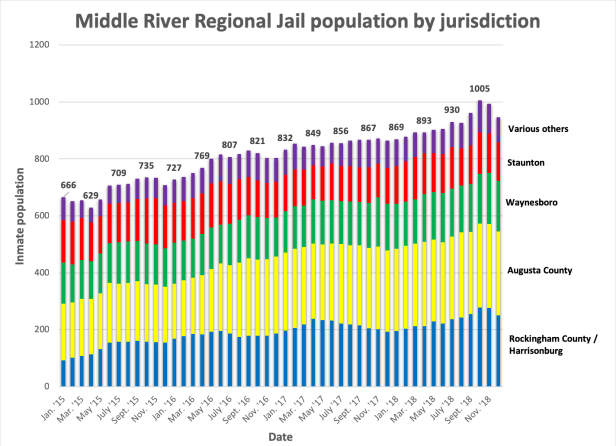 On Tuesday, a total of 925 inmates were in the Middle River Regional Jail, according to figures presented by Maj. Eric Young, the jail’s director of operations. Of that total, 243 were from Rockingham County and Harrisonburg. Inmates from both localities fall under the authority of the Rockingham County Sheriff’s Office.

In July 2015, the Middle River Regional Jail housed an average daily total of 157 inmates from Harrisonburg and Rockingham County. In December 2018, the average daily population from the city and county had risen to 250.

The number of local inmates in Verona is in addition to those at the jail in downtown Harrisonburg, which held an average of 325 inmates in 2018.

Young also told the authority board that most of the inmates from Page County will soon be transferred elsewhere. In recent months, Page County has rented space for nearly 90 inmates at Middle River. Young said the jail will also stop accepting new inmates from the state correctional system into its work-release program – another measure to limit overcrowding.

In 2014, overcrowding at the jail in downtown Harrisonburg prompted the city and Rockingham County to explore potentially building a second jail in town. They hired Moseley Architects to develop a local Community-Based Corrections Plan, which included plans for a 315-person jail on the south side of the city. The following February, however, the city and county decided instead to join the Middle River Regional Jail Authority – a move that became effective in July 2015.