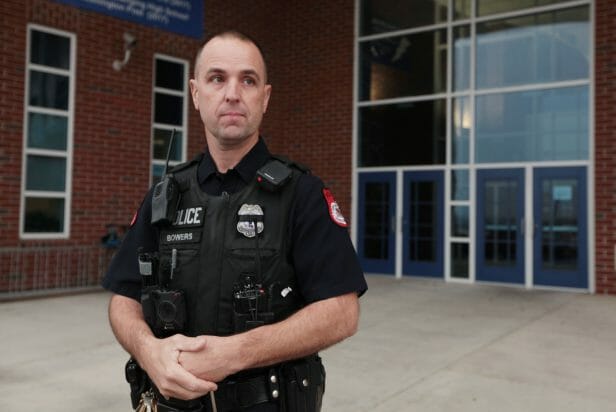 A threat and image of a firearm posted to social media by a 13-year-old Skyline Middle School student in February 2018 earned him a felony conviction and a two-week stint in juvenile detention. Eleven months later, a student at Fort Defiance High School in Augusta County posted a violent movie clip to Snapchat that was interpreted as a threat, but faced no criminal charges, following an investigation by the Augusta County Sheriff’s Department.

While some say different circumstances call for different outcomes, a bill now moving through the General Assembly would create a mandatory prison sentence for certain kinds of threats made against schools in Virginia. Though the law is a response to the increase in threats made against schools in parts of the state, local school administrators say they have not seen an increase in Harrisonburg and Rockingham County.

House Bill 1947, introduced by Republican Del. Jeffrey Campbell, from Marion, would mandate prison time for anyone who makes a threat to “bomb, burn, destroy or in any manner damage” school buildings or buses. The bill originally included a minimum six-month prison sentence, with at least 30 days of mandatory confinement. It has since been amended to reduce the mandatory confinement period to five days and passed the House of Delegates by a 61-38 vote. Del. Tony Wilt, a Republican who represents Harrisonburg and part of Rockingham County, voted for it. The bill is now before the Senate Courts of Justice Committee.

“The district that I live in, one of the localities … has suffered 32 bomb threats over the course of the last year. Now what that does, in terms of an interruption to the school year and an interruption to the learning process for the children, not to mention the trauma that it causes those kids and those parents, is overwhelming,” Campbell said, when the bill was presented on the floor of the House on February 4. “It’s the message that we’re sending to the community, to all those would-be perpetrators, that we are not going to tolerate you communicating a threat to our children while they are in an environment that should be safe and secure for them to learn in.”

In a 2018 report entitled “States of Concern: An Analysis of U.S. States with High Rates of School-Based Violent Threats or Incidents” by the Educator’s School Safety Network, Virginia was listed as “Moderately Concerned,” a rating that moved the state from 12th onto their top 10 list. And a January 13, 2019 article in The Virginian-Pilot noted that the number of school threats in the Norfolk and Virginia Beach school districts had doubled between 2017 and 2018, averaging about one threat every three days. According to area school officials, however, such an increase in threats has not occurred locally.

Doug Alderfer, Assistant Superintendent of Leadership and Administration for Rockingham County Public Schools, said that while actual threats have not increased, greater awareness of school violence has led to an increase in people reporting social media posts that they construe as threatening, such as images of students posing with weapons. For law enforcement, this means a full-scale investigation, even in cases where it is determined a simple online post was misconstrued.

The February 2018 incident at Skyline Middle School was the most recent threat made against a school in Harrisonburg, said Craig Mackail, Assistant Superintendent of Operations and School Safety with Harrisonburg City Public Schools (HCPS). The social media post by the 13-year-old student – which included an image of a firearm and a threat – was quickly reported to school administrators by both students and parents. Though law enforcement determined it to be a hoax intended to scare friends – the photo was from the internet and the student did not have access to firearms – the student was arrested and charged with a felony under a state law prohibiting written threats of bodily harm on school grounds. That law is separate from the one addressed by Campbell’s bill, which focuses specifically on bomb threats to buildings and property. 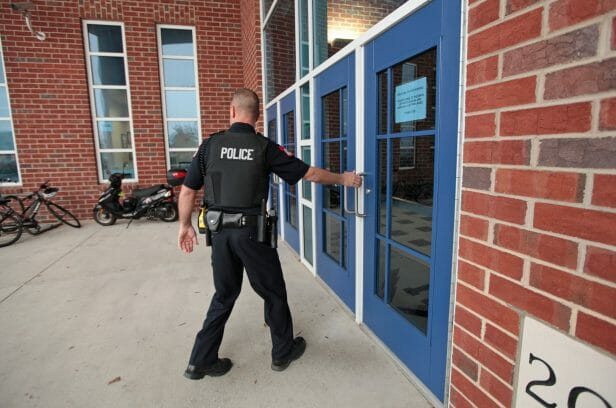 Ronnie Bowers’ shift starts before students arrive and doesn’t always end when they leave the classroom, as school resource officers are also present during sporting events held at the schools. They are mobile, spending the day patrolling school hallways and lunch periods getting to know students and faculty.

Procedures in place for responding to threats

In both the city and county school systems, any threat of violence is investigated by a Threat Assessment Team. The group, which includes social workers, counsellors, mental health specialists and law enforcement officers, assesses the threat and decides how to respond, following a model designed by the Virginia Department of Criminal Justice Services.

“We evaluate each threat to see if it is credible and what the appropriate response should be,” Aldefer said.  “We treat every threat as the most serious thing in the world. We work from that assumption down to where we determine if a threat was serious or not.”

“Our Commonwealth’s Attorney and our judges take school threats seriously,” Read said. “A school threat is an incident that causes chaos in the community.”

In addition to the legal consequences of a school threat, the school system also takes disciplinary action. The Skyline Middle School student who made the 2018 threat was removed from the school and put in an alternative placement, according to Mackail.

At the same time, the schools try to respond with more than just punishment.

“We also see that they get counseling or other help, because these are kids who have made poor decisions and need help,” Mackail said.

Both Mackail and Alderfer said students review a code of conduct at the beginning of each school year that explains how seriously school threats are taken and how severe their consequences can be.

“Calling a threat a ‘joke’ is a misnomer,” Alderfer said. “A threat of violence is never a joke.”

When a threat is made, Mackail said, law enforcement is notified immediately.

“It’s the first call we make,” he said. “We have a good relationship with the [Harrisonburg Police Department].”

Once law enforcement becomes involved it is out of the school system’s hands whether a student will be arrested and charged with a crime.

As the General Assembly debates the measure that would remove some discretion in certain school threat cases, Alderfer says schools and law enforcement already have the tools necessary to deal with school threats and question HB1947’s effectiveness at preventing them.

“I personally feel that blanket policies have limited effectiveness,” Alderfer said. “We judge each threat individually, based on the specifics of that case. In our current situation, we are already allowed to deal with serious cases with the consequences that are necessary.”

The bill was on the Senate Courts of Justice Committee docket for Wednesday, Feb. 13, but ultimately did not come up for a vote. That committee is chaired by Sen. Mark Obenshain–R, who represents Harrisonburg in the state senate.

It is now scheduled for its senate committee hearing on Monday, Feb. 18.

Note: this article was updated on Feb. 25 to correct the description of Detective Read’s position at the Harrisonburg Police Department.