With one nat’l championship in hand and a shot at another, JMU teams successfully ride growing e-sports wave. 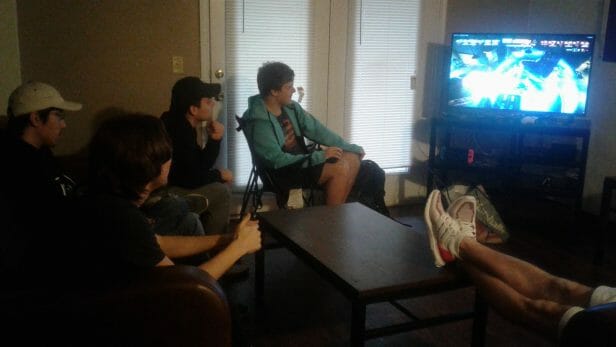 The JMU Overwatch team watches game tape. The crew is entering the national collegiate tournament with one of the top rankings in the country. Photo by Harrison Horst

On a Friday afternoon, six members of the James Madison University Overwatch team gather around a TV screen, watching tape from a “scrim session” – gamerspeak for scrimmage – earlier in the week. “Look where we are right now. We’re really far back,” says Mark “Sanity” Johnson, the team captain, pointing at the screen. “We should be here right now.”

Overwatch is a “first-person shooter,” where each player controls a character – known here as a “hero” – with a gun and a set of unique skills.

Like most other sports, the objective is straightforward: beat your opponent. In this case, that’s done with flashy explosives, crafty sniper shots, hails of automatic gunfire and other simulated tools of death and violence – as well as clever team positioning, strategic shield placement, and timely disables. And although Overwatch has several different game modes, the winner is almost always the team that overpowers the other in battle.

As the tape of the scrim keeps rolling, the teammates occasionally argue strategy and laugh at particularly unfortunate gaffes.

“If they’re on high ground, we couldn’t take a fight there,” says team member Shafee “IronCrit” Iskandar, chiding Johnson for abandoning a high-ground advantage on a particular corner of the game map.

Seated beside him, Victor “Vrosado” Rosado breaks down another sequence (as you may be noticing, Overwatch players have on-screen aliases, or handles).

“We should have just gone in with the EMP instead of waiting,” he says.

The film ends, and Johnson turns to his team. “I think a lot of this gets fixed if we just warm up beforehand,” he says. “We were playing really well by the end.”

The 2018 Stanley Cup pulled in less than 5 million average viewers; the World Series last fall had an average viewership of a bit more than 14 million. That same month, a League of Legends tournament attracted an average audience of 46 million (the vast majority from China). Like it or not, e-sports – organized, competitive online gaming – is starting to leave our beloved flesh-and-blood sports behind, at least in terms of audience numbers.

At the collegiate level, the Overwatch team’s budget and public profile doesn’t hold a candle to the football team. Still, video gaming has come a long, long way in a short, short time. After a victory on Sunday, Johnson’s Overwatch team finished the regular season with a 13-2 record, good enough for 16th place out of more than 500 teams in a national league sanctioned by Tespa. Originally known as the Texas eSports Association as the University of Texas, the group has organized national events for collegiate teams since 2013 and now hosts semester-long competitions for five different video games.

After such a strong performance in the regular season, Johnson and his friends enter the final, single-elimination tournament with a decent shot at winning up to $1,700 each in scholarship prize money. 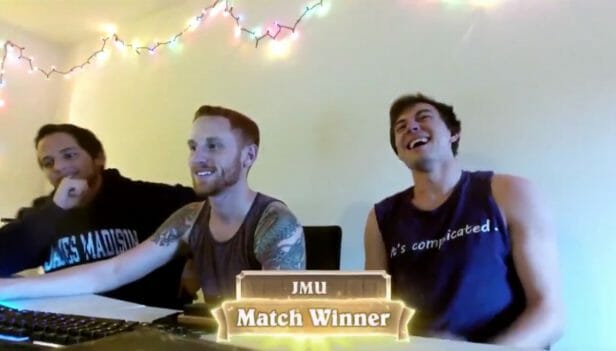 The Overwatch squad isn’t JMU’s only e-sports team that’s finding success. In December, a team of three JMU students made it to the national finals for a game called Hearthstone. Despite being “huge underdogs,” as team member Tyler Spence puts it, they went on a Cinderella run to win the Tespa-sponsored national championship and $3,500 each in scholarship prize money.

For Spence, a nursing major who graduated in December, and his teammates – sophomore sociology major Seth Pezanleo and junior theater major C.J. Doss – Hearthstone was a hobby that didn’t become a passion until JMU’s Gaming Club, PlayMU, brought them together.

“We didn’t even know each other before – we were matched up completely randomly,” says Spence, of his teammate Pezanleo. “Then we found out we were both tryhards, so we were like, ‘Ok, let’s be tryhards together.’” (Tryhard is a derogatory term for someone who puts a lot of energy into a single discipline but has little talent for said discipline, used tongue-in-cheek by Spence here.)

Hearthstone is a digital card game in which teams go head-to-head with decks they’ve curated. Each deck consists of 30 playable cards chosen by users beforehand from a pool of over 1,800 unique cards, all with different interactions. According to Pezanleo, the biggest reason they won the national championship was the time they spent curating unconventional decks with an aggressive playstyle, which countered the more defensive strategy favored by the top teams. 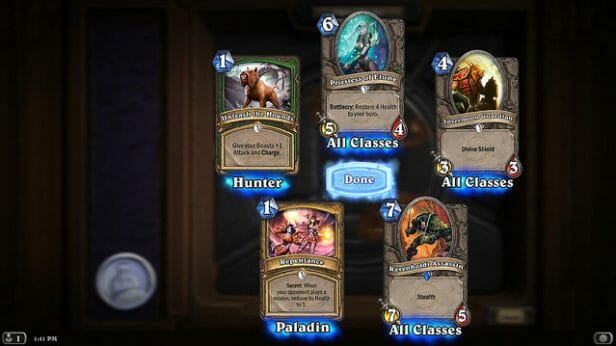 Five of the more than 1,800 cards in Hearthstone. Photo from Flickr Creative Commons, by mrwynd.

“Gaming is the ultimate equalizer. I mean, I’m never going to be able to play sports,” says Pezanleo, gesturing at his thin body. “But we did well because we put a lot of time into preparation, more than the other teams.”

Spence agrees. “With sports, there’s always a genetic component. I”ll never be 6-8,” he said. “But with gaming, it depends on how much time you put into it. Those guys are out there every day too, but this is something I can put time into.”

For Spence and Pezanleo, Hearthstone is more accessible and realistic than traditional sports, and it allows them to hone skills they’re proud of. Pezanleo, who ran a series of analyses when curating the team’s “aggro” deck, translated that experience to a resume for a government job application.

Johnson, the Overwatch captain, agrees. A football player through high school, he’s hesitant to draw direct parallels between athletics and e-sports. Still, he says the team-building nature of e-sports feels just like the camaraderie on a football team. And for him, e-sports are more mentally demanding.

“There’s so much more to e-sports,” says Johnson. “You’re doing film reviews, you’re watching your own tape back, like in competitive sports…and in an aspect, it’s much more complicated and layered than sports like football or basketball. You have four seconds to execute this entire plan and think through 20 steps, if you don’t do it, you’re going to lose the entire game, and it can really hinge on four seconds of game play. That’s why I think it’s so intriguing.”

Johnson also participates in a phenomenon unique to e-sports: streaming. Many e-sports players follow their particular game’s professional competitions, using a platform called Twitch to watch almost any match live. But Twitch also supports solo streamers – gamers who cast games as they play so that anyone can tune in to watch, learn, ask questions, or joke around. It’s an aspect of e-sports Johnson loves.

“The actual production games are like watching the Steelers play or the Redskins play. And then, watching people’s streams is like Kirk Cousins. All of a sudden, you can just watch Kirk Cousins work out and play around with his friends,” said Johnson. “It’s like, this personality, this person that’s just bigger than life on the screen who commands so much respect, and they’re making jokes with all their friends.”

For some, the idea of watching someone else play a video game is an entirely alien concept. But Johnson sees it rapidly becoming more common. “I think it’s a lot more accepted than I would have expected, especially now compared to five years ago,” said Johnson.

Though he doesn’t stream himself, some of his friends do. Johnson recounted the first time he watched a streamer named “Moonmoon” play Overwatch on Twitch. “It was before I even bought the game… they were having fun with the game, and they’re doing all this stuff on a character no one ever plays. I just thought, ‘That looks like a lot of fun.’”

The Hearthstone team senses a similar level of inertia. “We’re just at the beginning of seeing e-sports get really big. It’s growing really fast,” said Pezanleo. And as the e-sports community grows with it, it’s becoming easier for gamers like Pezanleo and Spence to find each other.

“That’s one of the best things about video games, you can play them with your friends, wherever you are,” said Spence. He and his fellow decorated JMU e-sports players, Pezanleo, and Johnson, say they established some of their closest relationships through gaming.

“I think it really helps people get social, people that might not be social in the first place,” said Johnson. “It brings an aspect of competitiveness and an aspect of good sportsmanship to an audience that wouldn’t otherwise have it. And I think that, if nothing else, it’s fun.”

At the end of the day, says Johnson, that’s exactly why e-sports deserves more attention. “I think that the people that play the games love to play the games and love to have a good time, and you can really see it…If [traditional athletes] can go out and have fun and be at the peak of their performance, why can’t people who are on their computers, as opposed to on the field?”