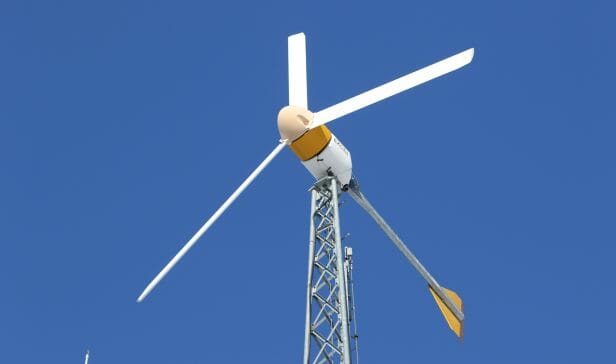 The Office for the Advancement of Sustainable Energy on JMU’s campus maintains a 120-foot-tall wind turbine, with blades that measure 33 feet long.

After Bridgeforth Stadium, it’s possibly the most recognizable landmark for those driving through Harrisonburg on Interstate 81. The 120-foot wind turbine is perched on a ridge on the east side of the highway, its spinning, 33-foot blades propelled by the invisible breeze. Also invisible from the road is the force behind that specific turbine – a renewable energy advocacy organization that calls Harrisonburg home. 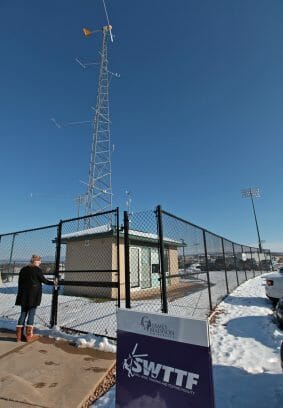 Remy Pangle, education manager at the Office for the Advancement of Sustainable Energy, opens up the gate to the testing facility for the wind turbine on JMU’s campus.

Now called the Office for the Advancement of Sustainable Energy (OASE), the organization got its start in 1999 as the Virginia Center for Wind Energy. Since the beginning, it’s been led by Jonathan Miles, a professor in JMU’s Integrated Science and Technology (ISAT) department. In 2002, the center became the Virginia Wind Energy Collaborative. Soon after, Miles started consulting on wind power projects throughout the region, and in 2007 the Center for Wind Energy was established as the state’s official source for all things wind power related, from research and education to resources for individuals and organizations interested in wind power.

Among its early projects was establishing the Small Wind Training and Testing Facility with its highly visible, 7.5-kilowatt turbine beside the ISAT buildings (it was the largest in the state until recently being eclipsed by one slightly taller 125-foot, 20-kilowatt turbine erected by a Honda dealership in Chantilly). Mounted to the pedestal are a plethora of sensors and monitoring devices; the building beside it is a spaceship of dials, gauges and computer monitors that constantly monitor the turbine’s performance and atmospheric conditions.

The center calls its off-campus warehouse, a few miles from ISAT, its “petting zoo.” It houses a collection of wind turbines, from full-sized ones awaiting installation to cut-away and scaled models used for demonstrations at schools and public events. It’s all part of the OASE’s mission to promote wind energy, which the U.S. Department of Energy hopes will generate 20 percent of electricity used in the U.S. by 2030. 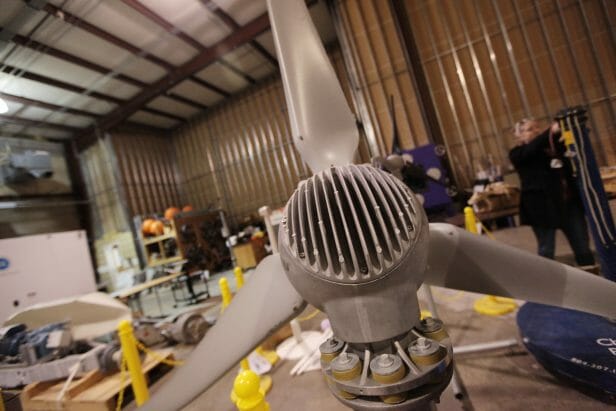 Despite OASE’s efforts, local deployment of wind energy has not been easy. First and foremost, is the Valley floor is not ideal for wind power. Though the area may seem windy, optimal energy production requires a near-constant wind of 20 mph or more. And while nearby ridgetops are better for turbines, they are often public land, and within scenic viewsheds.

“The challenge is that many of the places in Virginia that are windy are on ridgetops that are owned by the federal government,” Pangle noted. “We’ve got Skyline Drive and the Blue Ridge Parkway and they happen to be in the same place that would be perfect for wind energy.”

In 2007 the Highland New Wind Development was approved as the first industrial wind farm in Virginia. In the decade since the project started neither it, nor any other industrial scale wind project, has come to fruition in the state. Those years are littered with many attempts, including a wind farm proposed in 2008 in the George Washington National Forest on the western side of Shenandoah and Rockingham counties and projects in Tazewell and Roanoke counties.

A big wind initiative that it still in the works in the state is the Rocky Forge Wind Project in Botetourt County. The project would see 25 turbines installed on a mountain ridgetop near the Botetourt/Rockbridge County line, each reaching a height of 500 feet. The project is not without its critics, however – a second crucial reason wind energy has gotten a slow start in the area.

In Botetourt County, a local citizens’ conservation council and the Rockbridge Board of Supervisors, have concerns about environmental damage, noise, the killing of migratory birds and an impact to the viewshed from the Blue Ridge Parkway. Despite local resistance, the project is still scheduled to come online by 2020. If successful, it will be the state’s first industrial-scale wind farm.

Nearby states have seen faster adoption of wind energy. The Mount Storm Wind Farm in Grant County, W.Va., for example, first came online in 2007 and now includes a total of 132 turbines. Together, the 400-foot structures can generate 264 megawatts (MW) of electricity.

According to Pangle, OASE is now focusing its industrial wind energy efforts offshore. Plans that began in 2012 to build two 500-foot offshore wind towers 27 miles off Virginia’s coast are still underway, despite delays. In 2017, Dominion Energy announced that the project was on hold due to higher-than-expected costs, though they still expect the turbines to be online by 2022.

“In Virginia we have a good distributed wind network, but we don’t have anything going on at the utility scale,” Pangle said. “We’d like to see wind be a bigger part of it. I feel like with the administration in our state right now that is possible.” 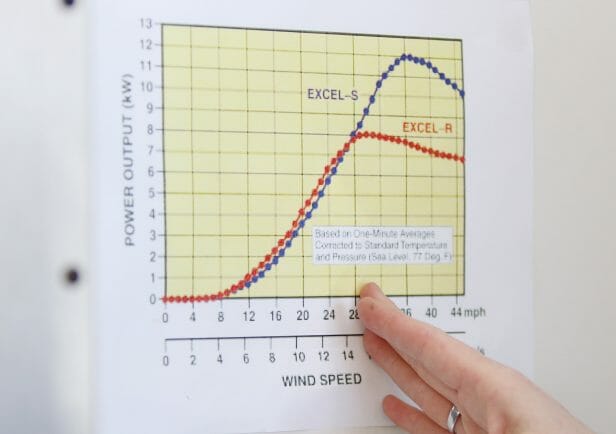 Remy Pangle, the OASE education manager, shows a graph of the energy output for the wind turbine on JMU’s campus. Optimal performance occurs with sustained wind speeds of 28 mph.

In 2018 Ralph Northam announced his Virginia Energy Plan, which set a goal for 3,000 megawatts of electricity to be generated by solar and onshore (inland) wind by 2022, with an additional 2,000 MW of offshore wind by 2028. (Virginia now has 0.4 MW of installed wind energy capacity, according to the US Department of Energy, and a little over 650 MW of installed solar energy capacity, according to the Solar Energies Industries Association; renewables – including hydro and biomass – account for 6 percent of Virginia’s electricity production, says the U.S. Energy Information Administration.)

“The clean energy sector has the power to create new business opportunities, expand customer access to renewable energy, and spark the high-demand jobs of the 21st century,” Northam stated in a press release that accompanied the plan’s unveiling. “Virginia can shift to a more modern electric grid that is reliable, affordable, resilient, and environmentally responsible—and the Commonwealth can lead this critical industry as a result. This plan sets an ambitious path forward for Virginia, and I am confident we will charge ahead towards progress over the course of my administration.”

While industrial wind energy is a future prospect rather than present reality for Virginia, the ISAT wind turbine is not OASE’s only visible success in Harrisonburg. It is also responsible for another prominent wind turbine along a major Harrisonburg thoroughfare – the 60-foot SkyStream turbine on the Thomas Harrison Middle School (THMS) campus atop the hill on U.S. 33 East. 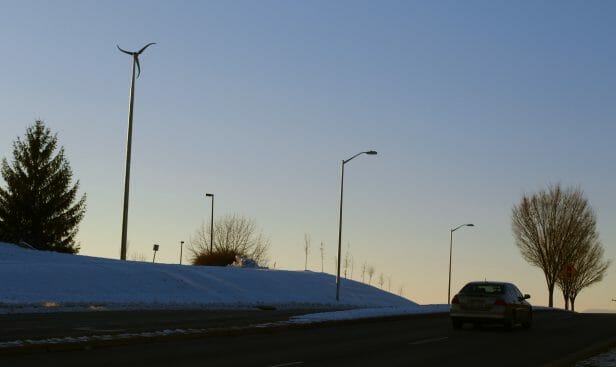 Thomas Harrison Middle School’s 60-foot-tall SkyStream turbine was installed in 2012 in conjunction with the state’s “Wind for Schools” program.

In 2010, the Center for Wind Energy began managing the state’s “Wind For Schools” program. One of its presentations was attended by Harrisonburg educators Andy Jackson, Jon DeVier-Scott and Ginny Pritchard, who soon thereafter initiated a quest to place a turbine at one of the city’s public schools.

THMS was chosen as the best site for the turbine because of the location’s visibility and the fact that renewable energy is a part of the middle school science curriculum. THMS students helped with the approval process. The school’s ecology club, led by DeVier-Scott, addressed noise concerns by measuring noise levels at the site. They found that the school’s HVAC system and traffic on U.S. 33 would be louder than the turbine’s spinning blades. The students presented their findings to the school board, which approved the project in 2012. Much of the estimated $25,000 cost of the turbine and its installation was donated, including the equipment, materials and labor.

“Renewable energy is a big part of the sixth grade curriculum,” said DeVier-Scott, STEM coordinator at THMS. “It’s one thing to read about it in a text book or to see a video, but this allowed the students to see the whole process first hand.”

“I don’t think I would have attempted it without [the Center for Wind Energy’s] help,” he added.

Jackson, co-director of Harrisonburg High School’s Governor’s STEM academy called the turbine “a visible reminder that our energy has to be generated whether we see it or not.” said Jackson

“We’re constantly making choices on how we generate our energy and those choices have both benefits and consequences,” he said.

Data tracking the turbine’s production are available online so students at any school can use the wind turbine in the classroom, from graphing wind speed and output in a math class to designing and testing scale-model turbine blades in a science class or discussing the role of renewable energy in the U.S. in a social studies class. OASE has helped seven schools in Virginia get turbines through the Wind for Schools program, including Luray High School and Central High School in Woodstock.

In the decade since it was formed as the Virginia Center for Wind Energy, OASE has branched out into all fields of renewable energy (on JMU’s campus a solar array sits beside the wind turbine). And while its reach has broadened, its core focus remains the same – supporting education, outreach and research as a largely behind-the-scenes invisible pushing renewable energy forward in the state.