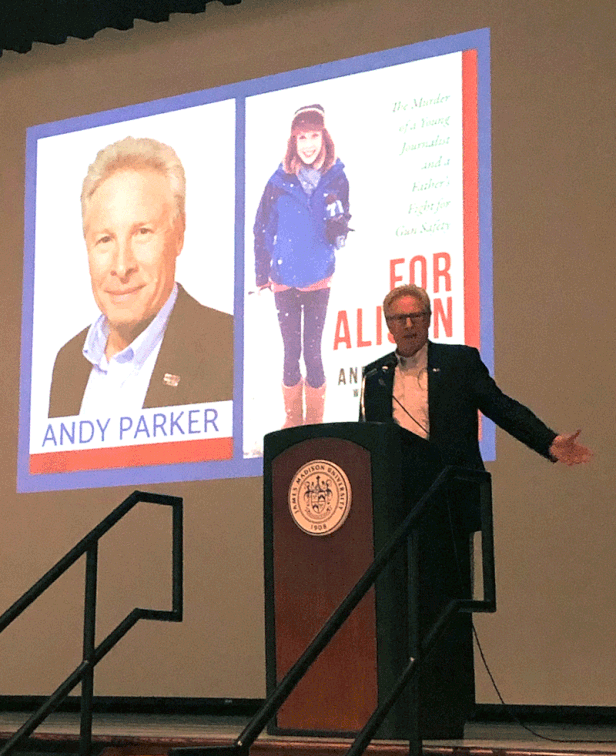 “The horrific way that Alison died captured the world’s attention,” Parker said Thursday during a speech at Memorial Hall at JMU, where Alison Parker graduated in 2014. “The video of Alison’s murder can still be found online today in edited and unedited form. That’s one of the nasty by-products of what we have been dealing with.”

Andy Parker, who became a gun control activist in the wake of his daughter’s death, and his family a target for online hate, and conspiracy theorists who have used posts and videos to peddle lies.

“It’s dealing with what we call the cretins that think I’m a crisis actor, that think that Alison’s murder was all a hoax, that she’s living in Israel with plastic surgery,” he said.

Parker was in Harrisonburg to speak about the book he’s written about his daughter, her legacy and his fight for gun control: “For Alison: The Murder of a Young Journalist and a Father’s Fight for Gun Safety.” But Parker also has become vocal about the underbelly of the internet culture that seeks to smear, defame and intimidate rather than engage in a debate over ideas.

The issue brings up many questions in the wild west of user content: technology algorithms, First Amendments rights and the ethics of massive internet companies. For victims and activists of gun violence, it’s reliving the worst day of their lives every day, all while being tasked with finding and requesting that the content be taken down.

“My efforts have been retraumatizing”

It’s particularly painful for Parker and his family because his daughter’s death was broadcast on TV. Alison Parker, then a 24-year-old reporter for Roanoke’s CBS affiliate, and videojournalist Adam Ward, were murdered while doing a live broadcast from Smith Mountain Lake. The killer later posted his own video of the shooting on social media.

“People all over the world watched Alison die,” Parker told the audience of about 75 people Thursday. “And while I never saw it, and I hope to god I never do, the replay that I concoct in my head is worse.”

Lindsey A. Harvell-Bowman, an existential psychologist and assistant professor of communication studies at JMU, is an expert on the psychological effects of thinking about death.

She said when people feel that their views are being threatened and they become aware of their own deaths, they are more likely to defend those views in any way possible.

“A lot of the conspiracy theories — if I understand them correctly — come from people that believe that it’s the government essentially coming to take our guns,” Harvell-Bowman said. “These are people who are pro-gun…when these things come up, like Sandy Hook, like Alison Parker, like any school shooting, it does turn into a political issue…they feel like their views are getting threatened.”

Harvell-Bowman said the trauma the families experience again and again prohibits them from being able to heal.

“It’s hard. It’s so hard,” Harvell-Bowman said. “We all have a desire to live on after death…The surviving families have to relive this day over and over again, and they are not healing. Allison Parker’s father is grieving the loss of his daughter and dealing with those emotions. But he can’t really get past it, because these people are attacking his family, attacking her, and attacking her legacy.”

Social media platforms don’t usually remove offensive content unless it has been flagged by a user. That makes it hard for Parker and his family. It’s up to them to find offensive content, and then implore the companies to remove it.

It creates a horrifying Whac-A-Mole situation in which the families of gun violence victims relive their worst day over and over. 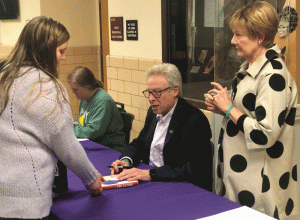 After fighting for more than a year to have videos of Alison’s murder, as well as hoax videos, removed from Google, YouTube, and other social media platforms, he enlisted the help of the Georgetown Law Civil Rights Clinic to make companies change their policies.

“They are the enablers of these trolls,” he said. “I figured, as long as I’m going after the NRA, I may as well take on the world’s largest corporation.”

This January, YouTube announced that it would make it harder for conspiracy theory videos to permeate the platform, but Parker said he doesn’t think it will be effective. So he is amplifying his message on a national stage.

“Since Alison’s murder, I’ve implored YouTube and Google to remove the graphic videos of my daughter’s death and related conspiracy content from their platforms,” Parker wrote last week in an op-ed in the Washington Post. “What I’ve since learned is that Google’s policies are neither clear nor consistent. Removal of videos that violate its terms of service seemingly happens on an ad hoc basis.”

Nick Swayne, the founding director of X-Labs at JMU, said there are so many other issues that go into companies trying to police their own platforms, it becomes nearly impossible and constitutionally questionable.

“From a technology perspective, it’s impossible to take down all the files. They are stored online, on private devices, public records, etc.,” Swayne said.  “Unlike child pornography, the video is not illegal — just incredibly distasteful to keep up. Because the video is not illegal, you can’t compel the tech industry to trace/delete all instances of it.”

Swayne also said it’s also like looking for needles in a billion-video haystack, and as soon as a video is deleted, it will be posted again.

He also said some gruesome videos have also sparked change.

“Despite these images being distasteful, I’m sure similar issues arise with many of the recent videotaped shootings that get posted. Many do a lot of good. They let the public see what happened and help them understand the circumstances, they lead to changes in the legal system,” Swayne said. “Constitutionally, it’s pretty shaky ground. Distasteful and agonizing for the family is not an established First Amendment test — and probably should not be.”

Parker has asked Congress to step in if Google and other platforms can’t police themselves.

“This is not about stifling free speech. Odious free expression is lawful, but targeted harassment, defamation and slander are not,” Parker said. “In fact, the relentless attacks against victims of mass shootings and their surviving loved ones are meant to intimidate us and silence our speech.”