A year in, the Virginia Breeze bus line has blown past expectations 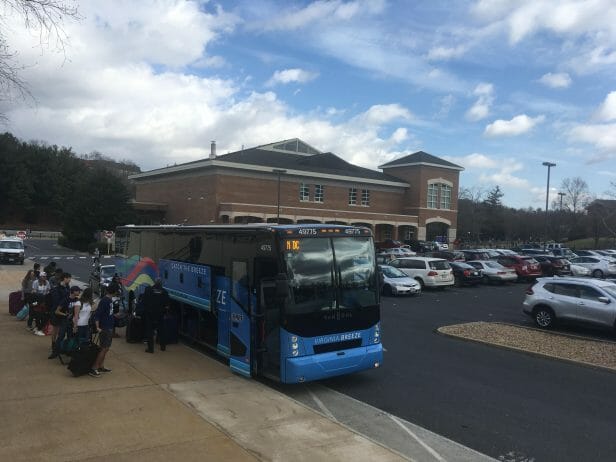 The state-run Virginia Breeze intercity bus service offers at least one northbound and one southbound departure from JMU each day. The line runs from Blacksburg to Washington, D.C. Photo by Ryan Eshleman-Robles.

On a sunny Friday, JMU junior Ahmad Hassane waits patiently beneath the looming brick and concrete mass of Godwin Hall. He’s anticipating the arrival of the Virginia Breeze – the year-old bus line with soaring ridership that runs from Blacksburg to Washington, D.C., with Harrisonburg one of several stops along the way.

Hassane is on his way home, as are more half of the others waiting for the morning bus. Mayra Cahuana and Edit Adco just finished a three-month work and travel program at Massanutten and are grateful the bus was running. When they arrived last December, a snow storm had taken the service temporarily out of commission.

When the state-run bus line began running in December 2017, the Virginia Department of Rail and Public Transportation (DRPT) estimated its annual ridership would be 7,125 passengers. According to figures published early this year, actual first-year ridership was nearly three times the original estimate, totaling 19,300 through November 2018 and prompting the agency to consider expanding the service.

“As part of that they’re doing a survey of riders to see who is riding the bus,” said Dan Sonenklar, a statewide transit planner with the DRPT. We don’t know what percentage of the riders is students. It’s certainly not just students.”

According to the DRPT, Harrisonburg is the Breeze’s its second-most-popular southbound departure stop, with more than 24 percent of southbound riders disembarking at JMU. Just under half the riders are between 18 and 30 years old, while nearly one-third are 51 or older.

A northbound Breeze bus departs daily from JMU’s Godwin Hall at 11:15am, with an extra northbound departure at 5:15pm on Fridays. The line has one daily southbound departure leaving Godwin Hall at 12:40pm, with an extra southbound bus on Sunday afternoons, departing at 8:20pm. A one-way ticket from Harrisonburg to Dulles airport costs $18.99, while a ride to Union Station in Washington, D.C., costs $35.99

In addition to students, Harrisonburg natives like Matthey Layman and Melissa Jantzi, both graduates of Eastern Mennonite School, who have made their lives elsewhere and use the Breeze to visit home. Layman used the Breeze for one leg of a trip back from his home in Denver. Jantzi has used it three times from Union Station, near where she works as a nurse in Washington, D.C.

According to Sonenklar, the bus service was designed to take passengers from western Virginia to and from the Washington metro area. One of the requirements of the federal funding it receives is connecting to the wider national network of commercial bus routes.

“The whole service design is set up so that it feeds into Washington, and then from Washington [riders] can access sort of the whole Northeast and the coast,” Sonenklar said.

A key reason for the Breeze’s creation was a lack of rural access to intercity bus lines. Chris Smith, DRPT’s director of policy, communications and legislative affairs, cited a 2013 study that provided the impetus for starting the Breeze.

“[It] showed that the I-81 and I-66 corridors were the most underserved when it came to existing, private, intercity routes,” Smith said.

Thanks largely to federal transportation funding and ticket revenue, the state spends nothing to operate the line. DRPT contracts with Dillon’s Bus Service to operate the Virginia Breeze, with ticketing run through the megabus.com platform. The company was chosen through an open bidding process.

Expansion of the Breeze may also be aided by the positive experiences of its riders and its growing reputation.

Maddie Clyde, a JMU freshman and first-time rider headed to Leesburg by way of the Dulles stop, was excited to try a way home that other people trusted.

Brianna Martin, a JMU sophomore who goes home to D.C. on many weekends will continue to take the Breeze due to its convenience.

“I tried the Zimride, but nobody is ever going home when I’m going home,” Martin said. “This an option that comes every day so it’s more convenient. You can go home whenever you want.”

Sonenklar anticipates the Virginia Breeze will continue to be utilized by both students and other travelers.