From the Confederate flag to incarceration rates, area residents take on conversations about racism 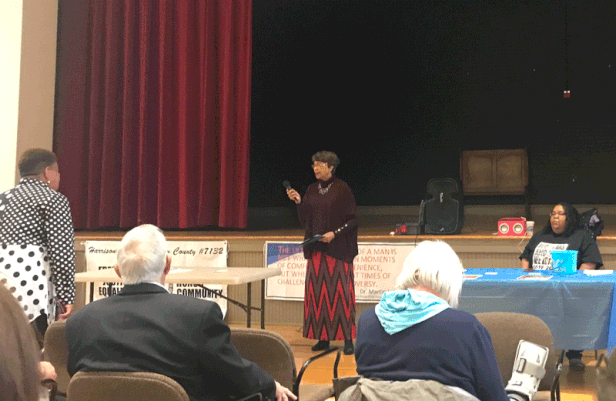 Community members tried tackling the “elephants in the room” regarding race relations in the Harrisonburg area as part of a wide-ranging discussion at the Lucy Simms Continuing Education Center Monday night.

The “Let’s Talk About Race” discussion, hosted by the Harrisonburg-Rockingham NAACP, attracted a packed house and was led by Chanda McGuffin, a Waynesboro-based motivational speaker and JMU graduate who founded the group RISE, an organization that aims to start conversations about race in communities.

McGuffin arranged the participants into five groups with each assigned what McGuffin called an “elephant in the room” to address — a major question or issue affecting race relations.  After each discussing in smaller groups, McGuffin brought everyone back together to share what they had discussed.

For instance, one of the issues was what the Confederate flag brings to people’s minds and whether participants would consider saying something about it to people who displayed the flag. Some participants mentioned words such as “hate” and “division.”

Kishia Tutt, a teacher at Montevideo Middle School in Penn Laird, shared her experience growing up in Lexington as one of only two African Americans in her elementary school class and how the flag didn’t mean much to her then.

“Growing up from elementary school to graduating from Lexington High School, I would see the Confederate flag all the time and it didn’t bother me,” she said.

She recalled visiting the Lexington campus of Virginia Military Institute and seeing a phrase referencing the flag that said “pride not prejudice.” After learning more about the history of the flag and hearing McGuffin link the flag to slavery, she asks, ‘What are you going to do with that information?”

One woman shared her experience of walking out to her co-worker’s truck and seeing a Confederate flag on display. She started a conversation with him about the flag, and he ultimately decided to take it down.

The bars and stars flag that is associated today with the Confederacy was actually the battle flag of General Robert E. Lee’s Army of Northern Virginia. In the 1960s, white supremacists used the flag as a symbol to promote segregation and oppose the Civil Rights Movement.

McGuffin said although a battle flag, it was still apart of the Confederate side of the war that was fighting for slavery and white supremacy. She asked why anyone would want to fly any version of it.

As the discussion turned to the issue of systemic racism, McGuffin cited the disproportionate amount of African Americans incarcerated in the United States and the country’s incarceration rate ranking as the highest in the world. She called it a form of “modern day slavery.”

“This right here is making white people very, very wealthy,” she said. “The free labor, locking them up, divvying up the money. The wealthy keeps getting wealthier and the poor keeps getting poorer.” 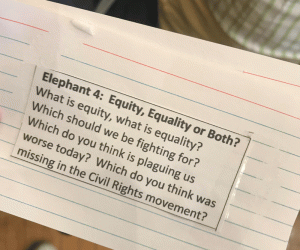 “Our school systems are preparing our black boys to fill these beds,” she said.

The other “elephants” in the room that the groups wrestled with included: “how does the statement, ‘White people are racist’ make you feel?” as well as the issue of equity versus equality and how can a community bridge the gap?

McGuffin and Sharon Fitz co-founded RISE, an organization that aims to start the conversation about race in communities by creating podcasts and running workshops and dialogues such as the one Monday night.

“If you feel comfortable going through this process, then I’m not doing my job,” McGuffin told the crowd.

Elaine Blakey, the membership chair of the Harrisonburg-Rockingham NAACP, said the only way to ease racial tensions is to have an open and honest conversation with each other.

“A lot of places aren’t talking about race because nobody really wants to do it,” she said. “You know when you talk about race and you make it a public conversation a lot of people shy away.”

Blakey, who invited McGuffin after seeing her videos and looking into RISE’s work, said she hoped participants examined what prejudices they might have — however hidden — as a result of Monday’s talk and determine whether their behaviors or words could offend others. But she said it also could be an opportunity to set a wider example.

“I think everybody is a little on edge because of the way the nation is going, and I think we can take that edge off in the city,” Blakey said. “They call us the Friendly City — perfect place to start.”