Fresh produce, good books and a dash of ingenuity from JMU dietetics students becomes a recipe for success 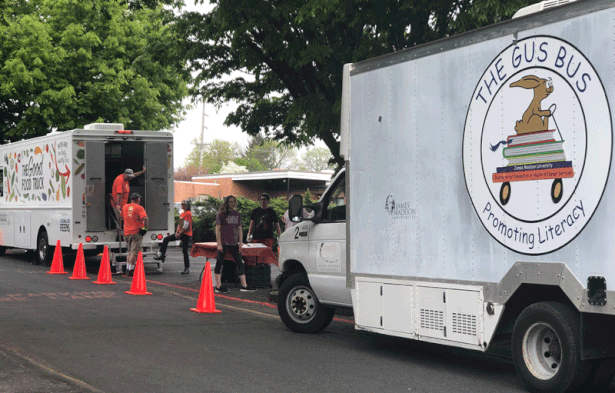 The Mobile Food Pantry and the Gus Bus prepare to serve families at a recent Neighborhood Produce Market.

A community program designed to help families get fresh fruits and vegetables is now taking a new approach thanks to the help of two JMU dietetics students, who spent a year trying to solve a problem of how to introduce families to using produce they’ve never cooked with before.

And the students came up with a tasty solution.

It all started when the Blue Ridge Area Food Bank took fresh fruits and veggies on the road to deliver to families struggling to get by.

“One of the things we heard from the Gus Bus is that they serve a very diverse population of families. Some refugees, some immigrants, some people who have been in Harrisonburg all their lives, so a very diverse group,” said Eileen Emerson, partner services coordinator for child nutrition programs at the Blue Ridge Area Food Bank.

The Gus Bus had worked with the food bank before to give children backpacks full of canned goods to take home over weekends and holidays, said Jolynne Bartley, assistant director of children and youth services for the Gus Bus.

She said after asking families if the program was helpful, they began to hear that what families — especially refugees and immigrants — were missing: fresh produce that they could cook at home.

“We went to the food bank and said ‘hey, this is a thing that we’ve been hearing, we don’t as an organization have the capacity to provide fresh produce, but would you all to do something like that,’” Bartley said. “The food bank was so outstanding and very quickly responded to that request.”

It made sense to provide those families with healthier options that they were used to cooking.

“They didn’t want to use the canned stuff, and they didn’t know how,” said Emerson, from the Blue Ridge Area Food Bank, the largest food bank in the Valley that feeds more than 100,000 people each month.  “Providing fresh produce was really important for us to meet their cultural dietary needs and also to expose people to new types of fruits and vegetables.”

The mobile food bank and the Gus Bus park in neighborhoods throughout the summer and usually makes public the schedule and locations at the beginning of each month.

Kids and families can walk through both, as they “shop” for produce and check out books.

The program was a success in terms of interest and demand. The mobile food bank/Gus Bus partnership now feeds over 250 families a month at the Neighborhood Produce Market during the summer.

But there was one small catch:  families typically wouldn’t take what they didn’t know.

Dietetics to the rescue

So the Food Bank and the Gus Bus enlisted the help of JMU’s Dietetics Department.

“It was acknowledged in that second year that it was working well, that they were interested in getting families to get some of the produce every time they were showing up…but there was definitely some disconnect with familiarity,” said Jennifer Walsh, assistant professor of dietetics and undergraduate program director at JMU.

She said that the program lent itself well to offering education on what types of produce could be had and how to introduce people to new foods.

Enter the two JMU dietetics students. Lexi Lepecha and Kat Kraft, who were beginning their senior projects in the dietetics program, heard from Walsh, that when families weren’t  familiar with certain produce, they were less likely to take it and cook with it. 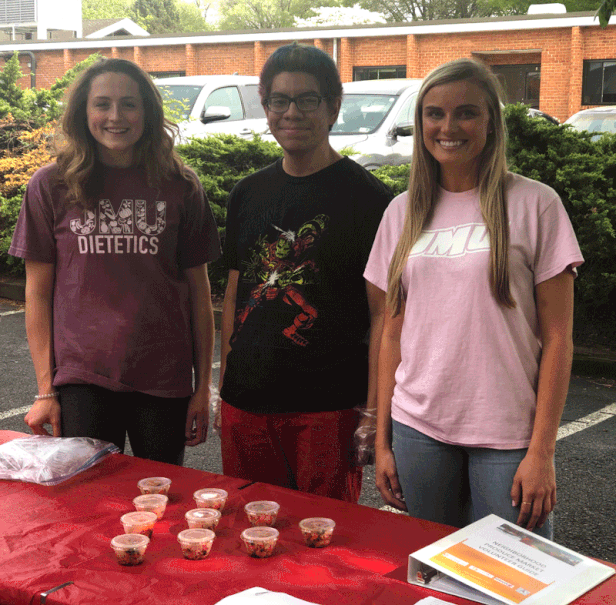 JMU Dietetics seniors Kat Kraft and Lexi Lepecha, along with JMU Student and volunteer Jared Aguilar, take a moment before handing out samples at a recent Neighborhood Produce Market.

So, the two seniors went to work creating a new program to develop recipes, create samples for families to try and translate the recipes into three languages.

After months of trial and error and overhauls of original ideas, the two have implemented a program that will live on long after they leave Harrisonburg.

Kraft and Lepecha dove into the project.

“It’s a challenge, culturally,” Kraft said. “At the beginning when we did this, we thought ‘okay, if we are going to make food samples, how can we make this appeal to a large audience, from children to older adults and people of different cultures.”

And she said they quickly realized that taking a one-size-fits-all approach wouldn’t work.

“That was definitely one of the things that we struggled with,” Kraft said. “I think everybody has different taste preferences and we had to get over that aspect.”

Food safety was another challenge, and the two had to find a commercial kitchen that could not only make the samples safely, but distribute them to the different locations.

Aramark, the company that handles food services on the JMU campus, agreed to help the program by volunteering to cook and distribute the samples.

“Aramark made their own recipes,” Kraft said. “It was really helpful, because ours weren’t…the best, but we tried.”

Next was the language barrier. Lepecha said the two decided that each recipe had to be printed in three languages to best serve people across Harrisonburg: English, Spanish and Arabic. 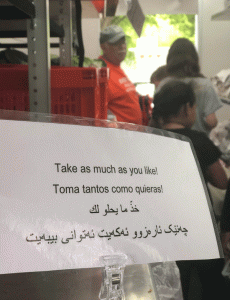 Making signs and recipes multi-lingual was one of the goals.

“In broadcasting our samples, for example, we could be like ‘oh, try our samples’ and sometimes they may not understand or they may think we want them to pay for it,”Lepecha said.  “We have definitely tried to create less of a language barrier.”

The two students who graduate this weekend and are both pursuing careers in the clinical field and will be working at hospitals, said they feel confident they have created a program that will continue for years to come. They also said the project has given them a deep sense of community, all while being able to share their love of healthy foods with those in need.

“I definitely know that while I am still going to a clinically focused profession, overall I’ve learned that community nutrition is important in preventing disease,” Lepecha said. “I hope wherever I go I’m able to make that impact.”

Kraft said ensuring nutrition across a community like that is just as important as making sure people are getting the right sustenance in a hospital, which is what Kraft will be doing.

“Bridging that gap between clinical and community is so important,” she said.

Meanwhile, back at the Neighborhood Market, the samples are still being handed out and the program keeps evolving. And the Gus Bus is still the reason kids come around.

“It creates this warm, inviting setting where people can really come together,” Walsh said.

“We could not have this program without the Gus Bus and the relationship they had already built with these families,” Emerson said. “The reason families are willing to come out to the market is because the Gus Bus has created an environment that is respectful and fun and passionate, and they know that if the Gus Bus says it’s okay, then it really is okay.”