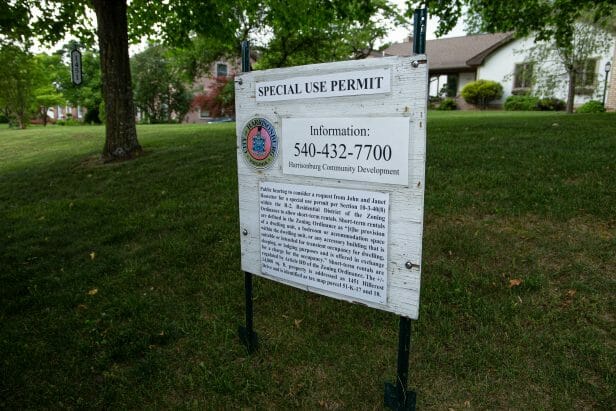 More than 10 short-term rental special use permit applications will come before the planning commission next month. Just four applications pushed the May meeting past midnight. Photo by Sarah Longenecker.

The most recent planning commission agenda packet – containing a first batch of short-term rental special use permit applications – was so large that it broke the city website, eventually had to be uploaded in three parts, and pushed the commission’s meeting well past midnight. Earlier this month, four special use permit applications for short-term rentals (STRs), including Airbnb properties and other vacation rentals, were the first to be considered following the passage of a new city ordinance to regulate STRs. And with dozens more STRs in Harrisonburg listed online, May’s marathon meeting could be the first taste of much more to come.

“I feel like there has to be a mechanism in the law to protect us from being unreasonable. To me, it is unreasonable for me to sit there until 1:00 in the morning,” said Commissioner Kathy Whitten. “But, in fairness to staff, I think they want to wait and see what it looks like, what the trend looks like. If it looks like we’re trending to having 11 [applications] every meeting, that’s not sustainable.”

“I recognize that being in the first round means we’re blazing the trail, and there may be adjustments made as everyone gets more experience with this process,” said homeowner Mike Stoltzfus, in an email to The Citizen.

Stoltzfus’s application was one of the three recommended for approval. City staff had initially recommended denial of Stoltzfus’s application, citing his property’s location “deep within a neighborhood.” Stoltzfus lives in Park View on Summit Avenue, a dead-end street near the western city limit. Staff’s recommendation states that introducing a short term rental in low-traffic areas could “change the character of the neighborhood” and “create neighborhood instability.”

“I disagree with staff’s concern about traffic, based on how “deep” our house is in our neighborhood,” said Stoltzfus, who pointed out that his street regularly sees non-resident traffic despite being at the end of a cul-de-sac. “I don’t think that recommending denial based solely on that variable is legitimate, and I’m glad planning commission recognized that and decided to vote in favor of approval.”

Maintaining neighborhood integrity was a major talking point during the commission’s discussions of STRs and the primary reason that commissioners recommended denial for one of the four properties, located in the Wyndham Woods neighborhood. City staff pointed out that the property was nearly a mile away from the nearest collector street. During the hearing, a neighbor spoke against the permit, describing the relative tranquility of the neighborhood and his concerns about both traffic and neighborhood safety. After discussing how much weight should be given to the “collector-street distance” factor, the commission eventually voted 4-3 for denial of the application. The applicants declined to comment for this story.

Commissioners also discussed at length the requirement that STR applicants live at the property and be present when guests are there. This condition, which isn’t a part of the STR ordinance, is just one of nearly 10 the commission considered when reviewing each permit application. The ordinance itself is fairly open-ended, prompting questions about whether some of the staff-recommended conditions should be a part of the ordinance.

“I am a little concerned about the number of conditions that city staff and planning commission seem to be interested in placing on applicants,” said Stoltzfus, who also participated in the public process of developing the ordinance. “There must be a reason those conditions weren’t placed in the ordinance, so why is the city consistently placing these conditions on all applicants, at least in this first round?”

Stoltzfus also noted that this question was raised by commissioners during the meeting. Because special use permits are evaluated on a case-by-case basis, several of the conditions were revisited for each application, adding to the length of the process. 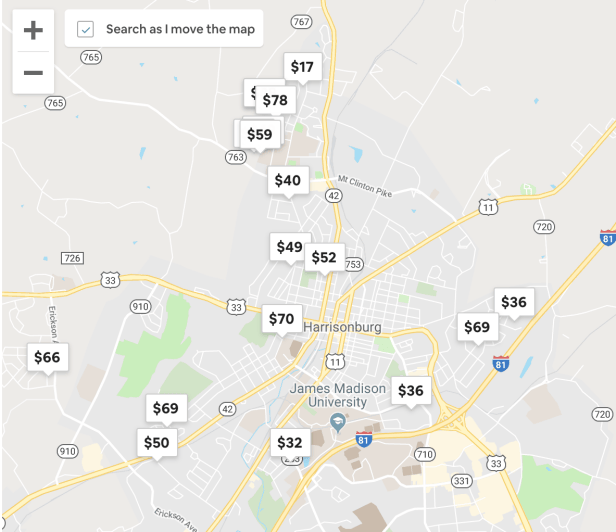 Starting August 1, the city will begin fining short-term rental operators who do not have a permit. This Airbnb screenshot shows some of the dozens of local properties listed on the site.

Adam Fletcher, director of planning and community development, noted that there “could be some long nights coming up…just because it’s a new thing.” According to Fletcher, city staff has already received 11 special use permit applications for the June planning commission meeting, with a week still remaining until the June application deadline. A search on Airbnb’s website shows over 60 locations available for rent in Harrisonburg. HomeAway and VRBO, two other large vacation rental sites, each list 10 to 15 homes in Harrisonburg.

“I think that the planning staff perhaps thought that maybe there wouldn’t be that many people who would come in for permits,” said Whitten. “I think they still think, and they could be right, that it will run its course through perhaps the summer, that we’ll get to the end of the applications, and that’ll be the end of it, we won’t have this influx month after month.”

Whitten pointed out that, aside from commissioner fatigue, long meetings also make items on the second half of the agenda less accessible to the public. Earlier this year, the planning commission had recommended adopting a by-right option for homestays, which would have eliminated the application fee and significantly abbreviated the process. But city council chose to pursue the special use permit route.

“I understand the reasoning for requiring a special use permit: it gives the city ability to guard against potential negative impacts of short term rentals,” said Stoltzfus. “As a long-time city resident, I share some of those concerns…However, I also understand the arguments for making STR operations a by-right use. The fact is STRs have been operated for a number of years in Harrisonburg and there have been very few complaints.”

In an email, Assistant City Attorney Wesley Russ suggested that, if needed, the planning commission could amend its procedures to limit the number of items on an agenda. Another potential solution would be to set an adjournment time at the beginning of the meeting, then punting unfinished business to next month’s meeting. Russ added that city staff had “agreed to slim down their presentations and remove repetitive material, which should help keep things moving faster.”

Above all, though, Whitten is uncomfortable with the planning commission spending so much of its time on the short-term rental issue.

“After August…someone is going to be scouring Airbnb, Homeaway, VRBO, to see who’s still renting and who’s on our list,” she said. “I’d much rather see somebody spending their time in that zoning office figuring out who’s breaking the rules with the long-term rentals. I think that might be more worthwhile. Or spending their time looking at houses in obvious, total disrepair that are being rented out that are obviously income-producing. That’s a bigger problem for me…I feel like we’re wasting our time spinning our wheels on thing that aren’t as big a deal as other things could be.”

Enforcement of the new short-term rental ordinance will begin on August 1. First violations for operating an STR without a permit will result in a fine of $100, with each subsequent violation fined at $500.