In their new home of Harrisonburg, many Muslim immigrants blend traditions with their new culture 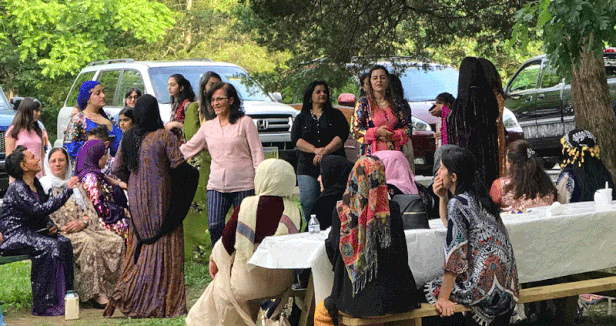 Women greet each other at last week’s Eid-al-Fitr celebration at Hillandale Park. (Photos by Nzar Sharif)

Different music emanated from portable stereos in each pavilion because Pakistanis have different traditional music than Kurdish people or Egyptians, and they all have their own specific dances.

And as the adults laughed, danced and talked in their separate pavilions, the children all played together — mostly baseball — and enjoyed Eid al-Fitr.

Eid al-Fitr, a three-day celebration for Muslims to end the holy month of Ramadan, brought together many of the Muslims who now live in Harrisonburg — even if many of them came here from different parts of the globe. As the large group from Muslim community gathered in Hillendale Park, other people walking or riding by stopped to join, ask questions and even take pictures.

People carry their traditions and culture after they migrate from their home countries, and maintaining those traditions play a big role in grounding them in their own cultural identity, as many of them told The Citizen.

The holy month of Ramadan ends with Eid al-Fitr. One of the foundations of Islam is fasting, and Eid — which means to spread joy among a community — is the reward for making it through the month of fasting. The celebration also offers an opportunity to refresh relationships and forgive those who might have committed a wrong.

Hardi Jaff, a graduate student at JMU, was one of the participants who celebrated Eid al-Fitr last week. Jaff said he believes it is a good practice to help Muslims stay grounded in their culture while adapting to a new one.

Jaff also said this specific celebration is important to spread joy that should last for weeks.

For Jaff and many other Muslims who celebrate Eid in Harrisonburg, Eid can also serve as an experience to combat homesickness and connect with other Muslims, who often form a kind of support group for each other. For that reason, it is their favorite time of year, Jaff said.

Hassan Hamdan is another member of Muslim community who has been living in Harrisonburg for almost 20 years. Hamdan, a professor of statistics and mathematics at JMU, said it is important to stay grounded by continuing traditions, but he said it’s also valuable to learn about other customs. On that point, Hassan recited a verse from the Quran: “O people we have created you from a man and a woman and made you different nations and tribes to get to know each other.” 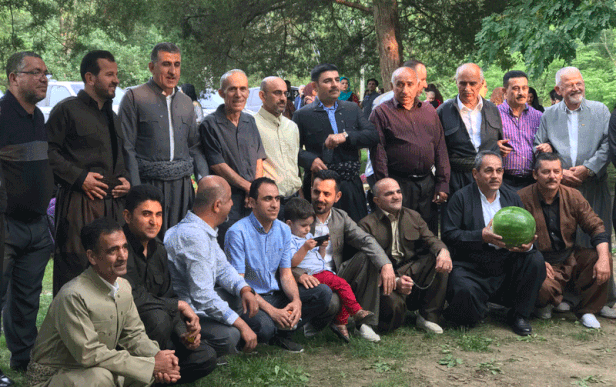 Men celebrating Eid-al-Fitr take time out of festivities to pose for a group photo.

Moving overseas can present difficulties when it comes to practicing certain traditions. For many Muslims, it’s an adjustment because instead of Eid-al-Fitr being an official holiday as it is in their home countries that have a majority of Muslim citizens, the celebration in the United States has to wait until the work day is over. (In some of those Muslim-majority countries, Christian holidays also are days off.)

For many immigrants, moving to a new country can often be isolating at times, especially being uprooted from their friends and family of their former communities and having to navigate language barriers and new landscapes. Many Muslims who immigrated to Harrisonburg view Eid al-Fitr as an opportunity to fill the gaps with joy and forgiveness and visit with others.

Mohammad Akram was not able to participate in last Tuesday’s gathering at Hillandale Park. Akram, a Harrisonburg resident who is in his first year in the United States, said he felt a little lonely as others celebrated.

“Even the word of ‘Eid’ used to bring happiness and a lot of joy back home,” he said, noting that it would require weeks of planning for the celebration, which is not always possible in the United States when so many other people don’t even know about the holiday.

He said he believes that the lifestyle here in the U.S is not supportive of multi-cultural celebrations as compared to what he used to have in Pakistan. 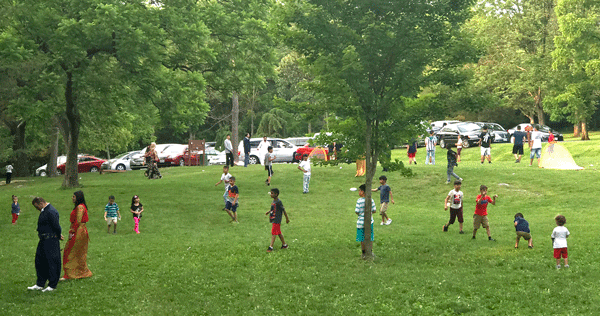 Children of immigrants from different countries play together at Hillandale Park during last Tuesday’s Eid-al-Fitr celebration.

The second-generation children who were born or raised in a new country are sometimes referred to as “third culture kids” — a term coined by Ruth Hill Useem, a sociologist from Michigan State University. It comes from the concept that parents are maintaining family traditions, while the children are developing connections to people from different culture and traditions.

Bahroz Rasheed was only 6 years old when his parents migrated to the U.S. Rasheed said in the beginning his family had spent an exhausting period going through culture shock, the challenges of settling into new jobs, finding appropriate housing and learning a new language.

Practicing those traditions, he said, was a great way for his parents to fill an emptiness. But that wasn’t the case for Rasheed, who is now 29.

“I came as a kid. I quickly learned the language,” he told The Citizen in his native Kurdish language. He also adapted quickly to the culture, especially as he made friends in school and in the neighborhood with his fellow children. So Eid al-Fitr is not quite as big of a deal for him or the second generation as it is for those who migrated to the U.S adults.

Rasheed, who has been living in Harrisonburg for almost 23 years, said he appreciated his father’s effort to teach him about his own roots of identity. He said he now sees celebrations like Eid al-Fitr as being priceless.

“We get together, we show love to one another, we forgive each other for previous mistakes or misunderstanding, we rebuild our friendship and refresh our relationship,” Rasheed said.

He said it was a wonderful chance to meet other community members and exchange stories and tips on local life in Harrisonburg.

He said when he was younger, his dad would let him participate in Kurdish celebrations and parties. However, he said it’s not an easy task for the younger generation to maintain practicing traditions.

“These kinds of celebrations are going to diminish, which is unfortunate,” he said.

Hardi Jaff said a multicultural environment allows for people to learn from each other and exchange traditions. That is how intercultural exchange and understanding happens, he said.

Harrisonburg, a designated refugee settlement community, does feature that diversity and has attracted people from countries across the globe.

Hassan, fully embracing the spirit of generosity that springs up during Eid al-Fitr, offered a coffee while explaining what this practice looks like in Harrisonburg.

He said he believes the diversity in Harrisonburg creates an atmosphere that encourage people to practice their own traditions and can often be found doing so in the community, such as the at the public parks or using the high school to offer Eid al-Fitr prayers, as they did last year.

Bahroz Rasheed said he believes diversity is still something new to Harrisonburg, with some residents still learning to embrace this diversity. He said that when he sees people are joining Kurdish dance during Nowruz celebration — in the first few days of spring — it is motivating to keep maintaining that practice.

“When I see that excitement in their eyes it does refresh that experience with us about our home culture,” he said.