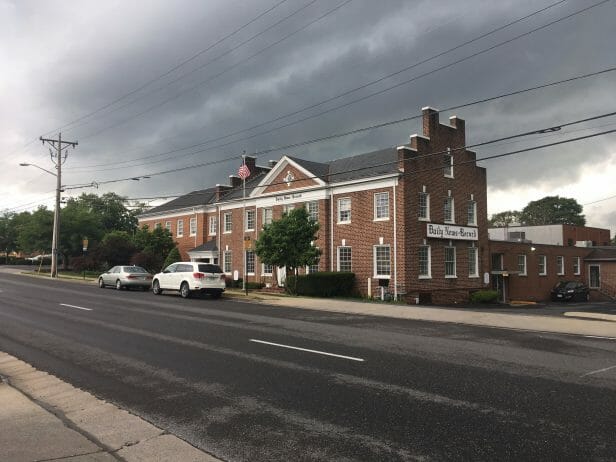 The Daily News-Record’s building on South Liberty Street was listed for sale last week. The current owners of the paper, Ogden Newspapers, has a lease on the property through 2022.

A historic downtown building that houses an equally prominent local institution has been put up for sale. Last Wednesday, the Daily News-Record building at 231 South Liberty Street was placed on the market. The move mirrors a wider trend of many local and national papers selling their historic headquarters.

The Daily News-Record‘s brick Colonial Revival-style building was constructed in 1941. Before that, the paper operated out of the Keezell Building on South Main Street. The building on South Liberty Street was added to several times over the years, and now sprawls over 34,000 square feet on two acres.

In March 2018, the Byrd family sold five Shenandoah Valley newspapers it had published for decades, including Harrisonburg’s Daily News-Record, the Page News & Courier in Luray and the Winchester Star, to Ogden Newspapers, a national company based in Wheeling, West Virginia that owns dozens of papers. The Byrd family, which had owned the Daily News-Record since 1923, retained the property and buildings when it sold its newspapers to Ogden.

The Page News & Courier building in Luray, built in 1928, was put on the block in May. According to the state Department of Historic Resources the newspaper has been located at the site since 1910. The asking price for the 5,000 square foot building is $319,400.

The Valley Banner, a Byrd-owned weekly newspaper established in Elkton in 1966, ended its operations in June 2018, and its building was sold.

In March of this year the Winchester Star moved from the building it had occupied since 1946. In an article published in the Star, Thomas Byrd was quoted saying that the family would be keeping the 40,000 square foot building and “exploring development opportunities” for it.

The Daily News-Record holds a lease on the South Liberty Street building until 2022, and any new owner will have to honor that lease. For now, according to Cameron Nutting Williams, regional publisher for Ogden Publications, the company is not looking for a new home for the Daily News-Record.

“Currently our intentions are to stay in the building,” said Craig Bartoldson, Daily News-Record publisher, who noted the paper has over 60 employees at its Liberty Street location.

Earlier this year, Ogden bought The Warren Sentinel building in Front Royal from the Byrd family. The paper was another former Byrd paper Ogden acquired in 2018. Williams said that Ogden had not yet decided if purchasing the Daily News-Record building would be an option.

According to Michael Hendricksen of Matchbox Realty, the listing agent for the property, the building is eligible for state and federal tax credits for the preservation of historic buildings. Hendricksen said that if the Daily News-Record lease is not extended, potential future owners might use the space for offices or retail. The property has a tax assessment value of $3.2 million.

The sale of the historic homes of print newspapers is part of a national trend to downsize, consolidate and become more efficient. In 2017 Staunton’s News-Leader sold its building and the paper currently leases space there. After more than 60 years in the hands of the Batten family, The Virginian-Pilot was sold to Tribune Publishing in May 2018. On June 15 of this year the paper announced it would sell its historic headquarters and move into “a more modern space.”

Bartoldson said that the Daily News-Record was in a different situation than many other print publications.

“Overall [in the industry] facilities have lost their printing capability, so their need of space has gotten a lot less” he said. “We’re in the situation here where we still have a printing press, a mail room and a full production area. So we still need the larger space for our operations.”

The Staunton News Leader sold its building and consolidated after ending its on-site printing operation. In addition to its own paper the Daily News-Record prints the News Leader as well as its weekly publications.

Our intention is to continue reporting and delivering and printing the newspaper in Harrisonburg for years to come,” Bartoldson said. “We have no intention whatsoever of leaving the area or of making any changes, at this point.”