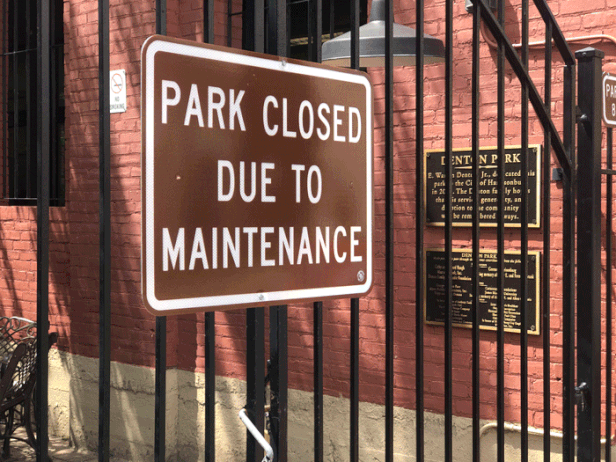 Denton Park is where a dog, which was being taken care of by a homeless person, was found dead June 16.

After several episodes this summer involving people panhandling — including the death of a dog and businesses reporting trespassing to the Harrisonburg Police Department —Mayor Deanna Reed called stakeholders to two meetings this week to discuss concerns and possible solutions.

Harrisonburg, like other cities across the country, has been struggling to deal with panhandling — including the safety of people asking for money as well as the wider causes and effects of people experiencing homelessness. Issues like affordable housing and addiction treatment have come to the fore. But a string of recent incidents involving people who had been asking for money downtown has raised alarms with business owners and city leaders who don’t want employees and customers scared off.

Reed called together representatives from the Harrisonburg Police Department, local businesses city staff, the Parks and Recreation Department and organizations aimed at helping people experiencing homelessness. Reed held meetings Tuesday and Wednesday to begin talking about the recent incidents downtown and what can be done.

Participants in those meetings who spoke with The Citizen acknowledged that no single solution to the problems emerged but said the open dialogue among all parties was a positive first step.

The conversations this week were aimed at addressing both the recent incidents and longer term issues, said Michael Parks, the city’s director of communications.

“The concerns we’ve heard from businesses on Main Street is more just the behavior of a very small group of individuals near their businesses. You know, people who are being loud or disruptive during certain times, some littering, people not cleaning up after themselves or their pets,” Parks said.

In addition, public arguments “between individuals near businesses that have made some of the business owners and some of their visitors uncomfortable with passing those areas,” he said.

Denton Park, a small park located downtown between businesses, has been closed since a dog died there June 16. Details of the incident are still under investigation.

The dog was found in the fountain, and it’s unclear whether the dog drowned or was first hit by a passing car, but Parks said the police department is still working on a cause of death.

Chief of Police Eric English said the dog was in the care of a local homeless man, who was watching it that day for the dog’s owner. When the man and his girlfriend got in an argument, the woman stayed with the dog. What happened after that is still under investigation.

Parks said the city closed the Denton Park to clean up following the dog’s death.

“It will probably be closed for two-to-three weeks. It depends on how long it takes to clean it out,” he said. “We are cleaning the water feature, we are doing some general maintenance and repairs.”

English said he’s seen a shift from last year to this year, both in terms of the behavior of “a few bad apples” in the city, as well as from business owners and customers who feel uncomfortable downtown.

“Originally when I first got here, it was like nobody really wanted to do anything when it came to the homeless regarding enforcement,” said English, who became chief last year after moving from the Richmond Police Department. “It was very welcoming. As time has gone on, things have changed. The climate has changed. Some things have occurred and people want us to (charge with trespassing) people that have been on their property….now it becomes an enforcement issue for us.”

He said that businesses that were once happy to let homeless people use their bathrooms started to get upset with some who were taking advantage of the situation.

“You’d have people going in, not only to use the restroom but they would end up washing up in the restroom,” English said. “They would be in there 25-30 minutes.”

In another instance, a business owner allowed a group of people to sleep in the business’ entry way at night but found them sleeping there during the day as well.

“So many people shared (at the meeting) that they have empathy and compassion for people in need, that they want to help, and wish to be involved in developing compassionate solutions, but at the same time, their livelihoods are at stake,” Dono said.

She said many have provided water, food and offered the use of their bathrooms to people who have been panhandling downtown.

“But many feel that their hospitality is starting to be abused and are worried that actions and negative news stories are having real repercussions in terms of potential health and safety issues along with loss of revenue,” Dono said.

English said after the police department began receiving complaints about trespassing and fighting, they tried to warn people they knew to be downtown causing disturbances about the change in approach.

“We didn’t want to surprise anyone,” English said. “people were given ample notice.”

The death of the dog was the spark that ignited the meetings on Tuesday and Wednesday.

Many of those working with different aspects of homeless populations said that they finally felt as though they were all invited to the same table to solve problems.

Mayor Deanna Reed, who led both meetings, said she was struck by what she heard during the meeting with business owners .

“I will be honest, I heard some concerns that were alarming,” she said. “However, my overall feeling is that we all want the same thing: to continue being the welcoming, compassionate community that makes us Harrisonburg.”

Eric Olson-Getty, director of development and administration at Our Community Place 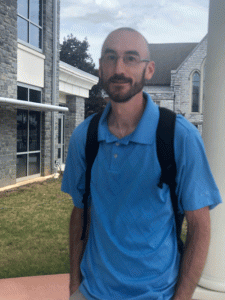 that’s aimed at helping homeless and low-income residents, said while he understands the city wants to address issues like panhandling and fighting, he appreciated that the mayor wanted to also look at the bigger issues of homelessness.

“The precipitating incident and concern was stuff going on downtown with people panhandling and that becoming problematic for business owners,” Olson-Getty said, “but what I really liked about it was that it was turning towards to more systemic problems that the homeless population face.”

Dono said the businesses felt as though they and their concerns were heard.

“I think they feel this first meeting achieved what they had hoped: sharing information and concerns, discussing what they are seeing and experiencing, understanding what the city is doing and sharing some ideas for what we can do together as a community,” Dono said

Shannon Porter, executive director of Mercy House, Inc., also attended the Tuesday meeting with the mayor. He said although Reed has discussed affordable housing and homelessness for the last year, he said the meetings this week have escalated the city’s efforts.

“I feel like there’s a task orientation now,” Porter said. “Particularly with our city manager. Mr. (Eric) Campbell really seems like he has some ideas and thoughts about things that need to be addressed from a systemic perspective — that talks about things like zoning and incentives for tax credits for affordable housing in our community. Some of these bigger broader strokes and steps that need to be taken.”

Rachel Howdyshell, executive Director of Open Doors, said she believes the Harrisonburg Police Department has been an equal partner in helping the organizations that help people experiencing homelessness.

“We have worked for years to build a relationship with them that I’m very proud of,” Howdyshell said. “They have been nothing but helpful to us, and one of the things that I will take away from this meeting is knowing that hopefully they know they are supported by us.”

Others working with the homeless population said they hoped the police department will look at more approaches other than resorting to charging people with trespassing.

“We can’t arrest ourselves out of this problem,” said Olson-Getty, from Our Community Place. “If we are trying to think about solutions to issues that are happening downtown — panhandling, trespassing — if we just try to take an approach where we just focus on enforcement…it’s going to create a revolving door where people may become incarcerated or fined. But somebody who’s on the streets doesn’t have the capacity to get themselves out of that situation.”

The bigger issue, Olson-Getty said, is that people don’t have anywhere to go.

“Right now we have a situation where business owners and the city and other private property owners are in the unsustainable situations where they can’t allow to let these behaviors to keep going on,” he said. “So we start trespassing people and then over time and then people have no legal place to be.”

English agreed that the city can’t simply rely on arresting people and said he was optimistic following the two meetings that more sustainable solutions were being found.

Reed told The Citizen after Tuesday’s council meeting that she wants to continue to address the issue of affordable housing with a public forum later this summer.

In the meantime, she said in an email interview, the city won’t tolerate people breaking the law.

“We will be working with [Harrisonburg Downtown Renaissance] and the business owners on immediate solutions,” Reed wrote to The Citizen.  “There are some concerns relating to a few panhandlers that are causing issues and that will not be tolerated. We are not trying to criminalize anyone, however if you are breaking the law that is something we have to address.”

The Citizen will have additional coverage of the issue on Monday, July 1.