A month ago, when I ate a banana for breakfast, I didn’t think a whole lot about it. This morning, however, as I cut up a banana for my oatmeal, I wondered who picked it. I wondered if, somewhere, thousands of miles away, the person who picked my banana wanted to be doing a job that I, the consumer, would never thank him for. I wondered how much of the 25 cents that my banana cost actually went into his pocket. I wondered who was suffering so I could eat fruit this cheap. 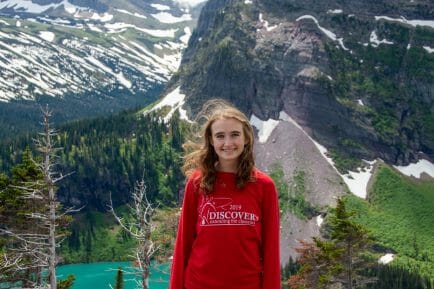 This is one of the things I’ve been thinking about on the Eastern Mennonite High School’s Discovery trip, which is a biennial cross-country camping trip made up of about 20 students from rising juniors to just-graduated seniors. EMHS has sponsored this trip eight times; this year’s leader is science teacher Lee Good. On Discovery, we’ve gone to the Pacific Ocean and back, making stops to camp and learn others’ perspectives on how we should interact with the Earth. Stops include the Land Institute in Salina, Kan., Arches National Park, the Redwood Forest, Glacier National Park and David Kline’s farm in Ohio.

A little over two weeks ago, I learned from some representatives from the Berry Center in Kentucky that when my food comes cheap, someone out there is suffering the consequences. I learned that while my wallet mourns the loss of a quarter for my banana or a dollar for a gallon of milk, a banana picker tries to scrounge together the half-cent scraps left behind by the deliverers to feed his family, and dairy farmers hope that the three cents they earned from that gallon of milk will be enough to keep their farm from joining the crowded ranks of dairy farms that close weekly.

I like to think of myself as a money saver, a trait I learned from my parents. I stick to the paperback books, and given the option between two prices at the store, my default is the less expensive one. I don’t need the highest quality; I just need enough. Isn’t that the right thing? But after all this time of believing the inexpensive way is the right way, I’ve once again been opened up to my own ignorance. It looks like (surprise) I don’t have everything figured out. That’s why we need to continue to learn about people around us and how what we do affects our neighbors.

Maybe after I get home, I’ll be a bit less stingy about my money. Maybe not right away. But maybe if I keep wondering about who picked my banana, I won’t forget those who suffer consequences for my convenience. If we all think about who picked our bananas, we might be able to shoulder some of those consequences together instead of shoving them off on someone we can’t see.

Next time you eat a banana, then, ask yourself who picked it.

Emma Schwertfuehrer is a senior at Eastern Mennonite High School.

Have something to say that you’d like to see published in The Citizen? We invite perspectives pieces from anyone in the community. Check out the guidelines and send us your thoughts.