Community potluck seeks to build ‘Bridges’ with sweet desserts, friendly greetings and lots of dancing from across the globe 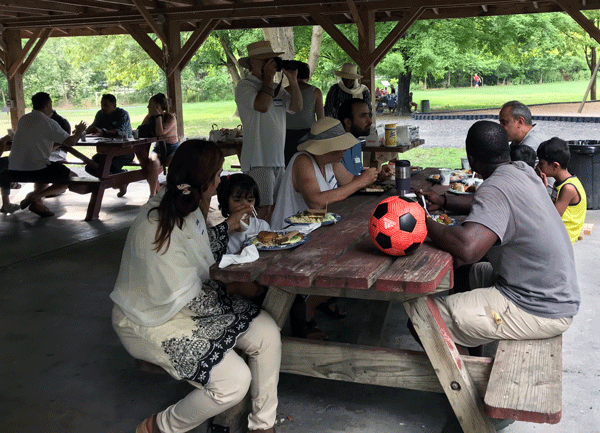 People mingle together as they try foods from different cultures at last Sunday’s Bridges Community Gathering. (Photos by Nzar Sharif)

Even though many Harrisonburg residents come from across the globe, it’s not every day that people get to exchange elements of their cultures with each other — taste foods with new flavors, interact with different languages, hear stories and learn new habits from different corners of the globe.

That’s why, several years ago, the congregation at Community Mennonite Church decided to plant the seeds of what has become Bridges Community Gatherings — a chance several times a year for people from different cultures meet each other and learn from each other. And there are plenty of options, considering Harrisonburg is one of the country’s 25 Church World Service refugee resettlement communities. The city school system, for instance, includes students who were born in 52 other countries, according to figures from the 2017-18 academic year. 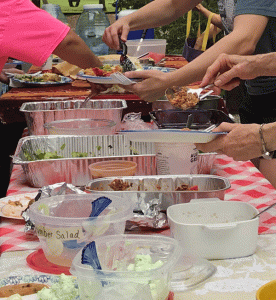 People dished up food from cultures across the globe.

Last Sunday afternoon, several dozen people representing at least 10 cultures gathered in Purcell Park to play games, laugh and eat foods flavored by various spices, such as dolma from the Middle East and sweet desserts from seemingly everywhere. As people walked by each of the pavilions where people were gathered, they could smell the food and hear laughter of new and old friendships.

Allison Alexander, who was one of the participants, said her favorite part was allowing any individual to welcome someone else in a different language.

“We can all feel a connection that tells us we are welcome here,” she said.

“It makes you feel so good when you are welcoming other people in your native language, you feel good, simply,” he said.

Events, such as Bridges, are important to promote diversity because they are opportunities for the community members to get to know each other and hear each other’s stories, said David Kreider, one of the event organizers.

“We believe our community can be a testament to the fact that we can live together as a beautifully diverse human family in peace, mutual appreciation, and respect –a vision of love for all humanity that we believe lies at the heart of our all our respective spiritual traditions,” he said.

Some people played soccer despite the heat that day.

Kabongo, was one of the players who was so excited to play — especially when his team won. And sports are a fun way to bring people together, he said.

“After all, any individual is hoping to live in a community that one can feel loved and 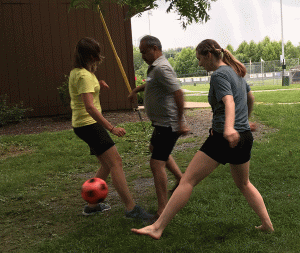 welcomed by other members,” he said.

Kreider said his favorite part of the event was joining hands in circles to learn different dances from different cultures of the worlds.

“In addition to the events themselves, it has been every bit as heartwarming to feel the same love, excitement, and warmth when our planning team has gotten together after each gathering to reflect on what we experienced, and to consider what we have accomplished,” he said.

Alexander said she’d like to see more people from different cultures join in future events, especially those who have come from countries who weren’t represented at this summer’s Bridges event.

“The more, the merrier” is true for our community gatherings, she said.

Kreider also said he’s hoping that Bridges work to continue widen its circle of connection with other cultural and faith communities, “especially with those who have been challenged with marginalization, prejudice, injustice, threat of deportation or attack.”