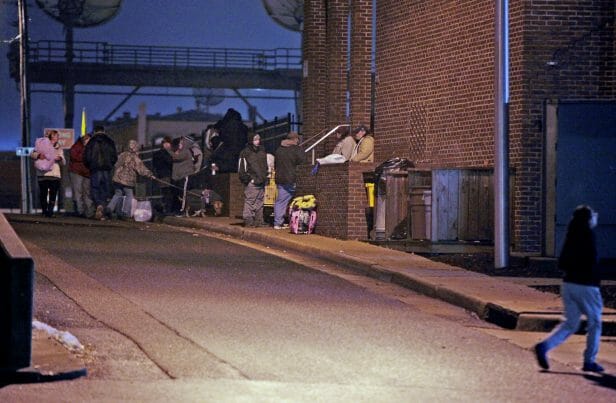 People wait outside of Blessed Sacrament Catholic Church for the Open Doors thermal shelter to open in this photo from November 2018. Open Doors coordinates with various churches that offer use of their buildings for a low-barrier, thermal shelter for the homeless during the winter. As the number of homeless people in Harrisonburg grows, calls are mounting for a year-round low-barrier shelter. All photos by Holly Marcus.

Recent concerns over people sleeping on the lawn of Our Community Place (OCP) is highlighting what local advocates say is the need for year-round solutions to address homelessness in the area. According to Sam Nickels, executive director of OCP, the influx of people sleeping outside OCP began with a misunderstanding.

“For a short while, police were asking people to leave properties downtown and telling them that they could go to OCP to stay. That was a misunderstanding of our policy and when we told police that, they responded and stopped telling people to go to OCP,” Nickels said.

Regardless, an increasing number of people have been spending the night outside the community center. In the last month, Nickels said, it’s averaged between 20 and 25 people.

After the situation came to the attention of city officials, the practice ended last Monday.

“The 29th was the last day that people could stay at our property [overnight], and the primary reason for that was that the city has made clear that under the current laws our zoning does not allow for overnight sheltering,” said Nickels. “Our board had chosen the end of July as a ‘go, no-go’ decision about it and the city had been flexible to allow that, but they also made it clear that they wouldn’t allow it to continue.”

In an email to The Citizen, Mayor Deanna Reed said that once city staff became aware of people sleeping on OCP property, they had to inform OCP that it was not suitable for use as an overnight shelter.

“The OCP building does not meet the fire safety and building code required by the State of Virginia for accommodation spaces,” Reed said. “It is not easy to turn away people who are in need, however as city leadership it is our responsibility to ensure people are safe. We cannot approve anyone who is in violation of the required safety and building codes. Harrisonburg is a fast-growing community, which mean our vulnerable populations are also growing. We have to come together as a community to address these issues.” 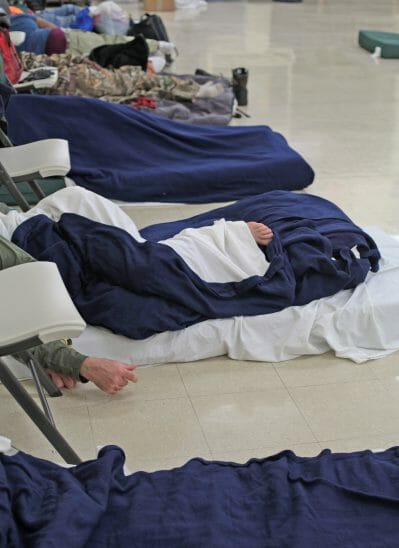 The possibility of opening a temporary shelter until Open Doors opens in November has been stymied so far by the lack of a suitable location and funding.

Rachel Howdyshell, executive director of Open Doors, a low-barrier thermal shelter which operates in local churches during the winter, described the situation as one that’s been several years in the making due to the city’s lack of affordable housing.

Nickels said OCP and the city have discussed the possibility of opening a temporary shelter that would bridge the gap until Open Doors opens in November. That would require an adequate building in a B-2 or M-1 zoning district – and an owner willing to allow it to be used for a shelter on a one-time, temporary basis. So far no possibilities have emerged. But if that were to happen, Nickels said, OCP would “go back to the city and the county to request funding again.”

Opening a three-month, temporary shelter will cost about $23,000, Nickels said. The local United Way has volunteered to cover one third of this cost, if matched by Harrisonburg and Rockingham County. But with no suitable location identified for that temporary shelter, a request for that funding has not come before the city. Nickels is looking for a space large enough for 15 to 20 people to lay mattresses on the floor. Bathrooms are also needed, although portable toilets would suffice.

“OCP’s mission is not as an overnight shelter. We’re trying to do this for the community and for folks who are homeless, but once that time period is over we need to go back and exclusively focus on our day programs,” Nickels continued. “Our goal is to challenge the city and the county to work with us and other agencies in town to work towards coming up with an appropriate solution for next summer, because this is going to happen again.”

While city staff continue looking for ways to address homelessness in Harrisonburg, Mayor Reed said the city and county cannot fund a low-barrier shelter on their own.

“We know we possibly may need a year-round shelter, low-barrier bed access, treatment programs, and additional permanent supportive housing. As I have stated, we will have to work together as a community to address these system gaps,” she said in an email. “We are attempting to address these challenging issues but to say the City and/or County should solely fund a low barrier shelter is not realistic. To successfully address homelessness in our community will take the collaborative efforts of service providers, the non-profit community, government and private sector.” 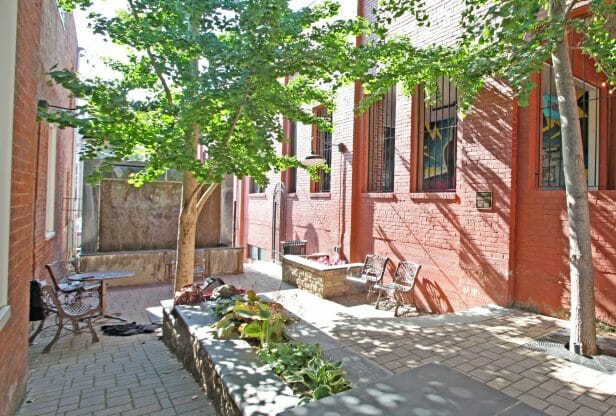 Until it was closed at the end of June after a dog died there, Denton Park in downtown Harrisonburg had been a gathering spot for some people without anywhere else to stay.

Both Nickels and Howdyshell say a more permanent, broad solution is needed. While organizations like Mercy House and the Salvation Army offer shelter year-round, they are not open to some, such as people on drugs or alcohol or people on the sex offender registry. (Past criminal records are not a barrier to being able to stay at the Salvation Army shelter, but because families and children also stay there, those with a sex offense status are not permitted.)  A “low-barrier” shelter, like Open Doors, has fewer restrictions on entry.

Nickels said the focus on the homelessness issue in the area shouldn’t be about just “adding more and more beds.”

“It’s complicated because the medium- and long-term solutions also have to do with providing affordable housing and providing enough case management to help certain people access some of the resources that are already available,” he said. “In addition to that, we’re always going to have some folks who are homeless, so we also need housing in order to be both compassionate and provide structured assistance to folks to help them deal with the difficult challenges of their lives.”

In the meantime, those who had been sleeping at OCP until this week have dispersed to other locations around town, Nickels said. He wouldn’t discuss where, specifically, they may have gone, but said that in the past they have found places to stay out of sight during the night, like the culverts along Blacks Run. In her experience, Howdyshell said, the summer months are a time of independence for the area’s homeless.

“I always have people telling me that they only stay with us in the winter because it is a matter of life or death to not be out in the cold,” she said. “Most of the time they prefer to not be taking things from other people or relying on other people. They’d rather be self-sufficient and they find somewhere else to stay on their own.”

“The reason why we do what we do and the reason that OCP does what they do is that we believe no matter what, everybody needs suitable shelter,” Howdyshell continued. “That’s why each piece of our shelter system is so important and that’s why we work together so closely to make sure that everybody’s needs are met by the organization that best fits their needs.”

“It’s not just 10 or 20 people anymore, it’s 40, 50, 60 folks that are coming in out of the cold,” he said. “we need to realistically face that challenge and say, ‘O.K. Maybe it’s time we do a year-round shelter. Maybe it’s time to adequately fund that kind of program, instead of giving it to a non-profit organization.’ We’ve reached the point where it is not a small problem anymore.”

Reed said city and county staff have scheduled meetings to continue discussing the issue, and that city staff plan to meet regularly with service providers.

“We as a city know we have to do something,” she wrote. “However, we will not be able to fix our homelessness struggles in a couple of days. We appreciate the dedication of our partners who have been willing to have these discussions with us and we are actively working together to make Harrisonburg a better place for all residents.”