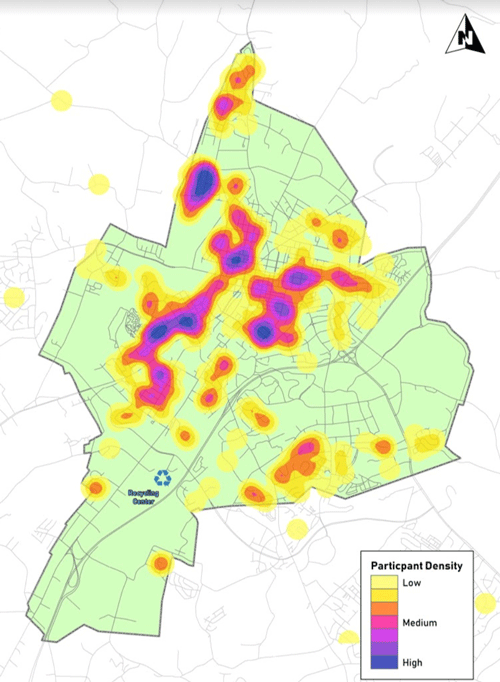 A map courtesy of Harrisonburg Public Works that shows the rate of participation in voluntary recycling over the last several months.

A steady stream of cars and trucks pulled into Park View Mennonite Church’s parking lot last Wednesday leaving barely more than a minute between one departing and the next arriving. Most were residents of the Virginia Mennonite Retirement Community who were taking advantage of the Mobile Recycling Unit’s new location.

It was the first time the recycling center on wheels had come to this neighborhood, the result of some reshuffling by the city’s Public Works Department based on participation of residents. The city scrapped its weekly stops at Purcell Park and Dream Come True Park locations because low traffic and replaced them with the stop at Park View Mennonite Church on Wednesdays.

On this first day, some people arrived with truck beds stacked with cans and cardboard and some stuffed their recyclables in their car trunks to bursting, while others walked their bins across the street to the church parking lot.

They chatted among themselves as Austin High, the public works employee running the mobile unit,  directed them to the appropriate bins for their plastics, cardboard, paper and plastic bags. One woman asked if she could have some plastic shopping bags from the bin to use in her home and took several back with her.

June Drescher, who said she considers herself an “environmental person,” told The Citizen she was grateful she no longer had to haul all her recyclables to the Beery Road Convenience Center. She said she would trek there twice a month. Now, the mobile unit’s weekly stops at the church will allow her to recycle more often, decreasing the chaos that collects in her garage, she said.

Since the discontinuation of the single stream recycling program in 2018 as a result of global changes in the recycling market, Harrisonburg has depended on the initiative of residents to recycle.

In 2015, city statistics showed that the curbside pickup program yielded a 35-40 percent success rate, which increased during the three years of single-stream trash and recycling pickup. But that fell to 26 percent after the curbside program’s discontinuation, according to the figures. 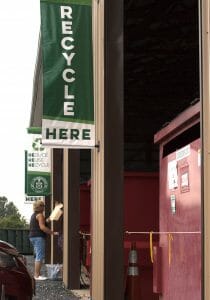 Since March 2018, the Beery Road recycling center has served as the primary drop-off point for Harrisonburg residents who want to recycle. Then Public Works launched a Mobile Recycling Unit for people to drop off their paper, plastic, glass, cans and cardboard at the Farmers Market on Saturdays and expanded that service in March to stops in different neighborhoods Monday through Thursday. While the vast majority of Harrisonburg residents who responded to a 2018 survey conducted by the city stated that they believe recycling is important, rates of recycling remain low.

Harsit Patel, Business Services Manager of the Public Works Department in Harrisonburg, said the traffic of the Mobile Unit locations is determined through a combination of volume of recyclable materials collected and the number of people using a given location.

Patel said the community’s recycling rate and numbers showing the use of the Mobile Unit won’t be available until the end of the year.

Back at Park View Mennonite Church, June Drescher, who also attends the church, said its leaders had informed parishioners, who are mostly residents of the adjacent neighborhood, the Virginia Mennonite Community, of the new mobile unit stop.

Austin High, the city employee of 28 years who drives the Mobile Unit to its five locations, said traffic looked to be “about the same” in the new location as in the three other neighborhoods he’s been stopping in since March: the Lucy Simms Center on Mondays, Westover Park on Tuesdays and the walking track near Waterman Elementary School on Thursdays.

High also said those who take advantage of mobile unit in the neighborhoods tend to be mostly older residents.

Miriam and Nathaniel Stauffer-Fairfield, the youngest couple to show up that day, were also happy about the convenience of the new location. Recent transplants from California, where they used a curbside pickup program, they had their own take on the pros and cons of convenient recycling programs.

“Now that I have to schlep it around myself I’m more conscious of what I’m using,” Miriam said.

They said little “bumps in the road,” such as no more curbside pickups, make it easier to make excuses for some not to recycle.  But “a little friction is good,” Nathaniel said, because they now focus more on reusing things around their house.

Miriam, who has been following news about global recycling trends, said she’s concerned in the wake of decisions by the Chinese and Indian governments to further restrict what materials to accept, which has all but crippled the market for Nos. 3-7 plastics. Harrisonburg, along with most U.S. communities, stopped accepting those plastics, which are generally lower grade and often include fast-food containers, yogurt cups and other packaging. Even the market for Nos. 1 and 2 plastics — like drink bottles and milk jugs — is struggling with falling prices.

She said that with the instability of the market she wonders how much of what she brings to the mobile unit will even end up being recycled.

Patel said Harrisonburg residents don’t have to worry about that at this point.

“Everything brought to Beery Road is given to local recycling agencies,” he said. “As of yet, we have not had any loads rejected.”

Both of the Stauffer-Fairfields also expressed a sentiment repeated by other users of the Mobile Unit who stopped by the church’s parking lot last week — that as “children of God” they felt called to be “good stewards of the Earth.”

This exact phrase was repeated by many people who showed up the first day. That included one woman who didn’t wish to be identified but said she believes being a good steward is important even though she is “not a big believer in this climate change thing.”

The concept of stewardship is prominent tin the Mennonite Church. A series of articles on Mennonite Church USA’s website offers guidance to the community about key values and beliefs, including Article 21 that says, “We believe that everything belongs to God, who calls us as the church to live as faithful stewards of all that God has entrusted to us.”

Regardless of Harrisonburg residents’ motivation, Austin High, said he’s just hopeful more people find their way to recycling bins, whether it’s at Beery Road or one of his stops with mobile unit to raise the city’s participation rate.