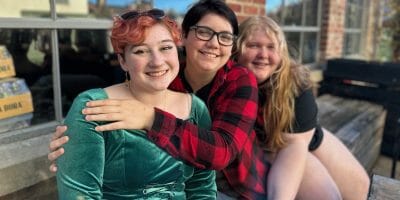 Every shimmering piece of jewelry cradled in Emily Warden’s Richmond storefront has a storied past riddled with details about its origin and meaning it’s meant to convey.

And like every glittering gem in her store, Warden, who graduated from James Madison University in 2017, also has a story worth telling.

Forbes Magazine projects her business, Emily Warden Designs, will earn more than $2 million in revenue this year. That’s one of the reasons Warden is listed in the Art & Style category of this year’s Forbes 30 under 30 list. The category honors those who are “creating and designing the future of fashion and the arts.”

Warden’s love story with metal working — to which she was drawn because of stones — began while she was taking classes at JMU in Harrisonburg.

From JMU to Forbes

It started as a joke. No, but really.

A friend of Warden’s kept passing on a rumor that she’d been in Forbes, though in hindsight it might have turned out to be more of a manifestation than a fabrication.

“It got me thinking,” the jeweler said. “I wonder how you even get in Forbes?”

Warden nominated herself and went through the process of answering a range of detailed questions about her business. Eventually, Forbes selected her for the list, which includes some well-known names like skincare brand owner Hailey Bieber. Yes, that Hailey Bieber.

“I knew it was a longshot,” Warden said. “I wasn’t expecting to actually place so having been placed among people like that. It doesn’t feel real.”

Mark Rooker, the head of JMU’s metals program, met Warden when she was a first-year student and said he isn’t surprised by her success.

“She’s clearly worked hard for it, including being very strategic in what she does and figuring out ways to keep her business growing,” he said. “I’m incredibly impressed.”

Warden said she hopes the Forbes “30 under 30” list will get more people familiar with her business and would trust her to design “monumental jewelry pieces for them.”

From dreamer to Duke

For Warden, the root of her artistry goes back to childhood. Growing up in Virginia Beach, she spent many of her days making arts and crafts projects.

That passion led her to painting and drawing in high school. And she even took glass classes at the Chrysler Museum of Art in Norfolk.

The next step seemed pretty natural in hindsight. She applied to JMU’s art program, drawn to the newly finished Duke Hall.

“It was a very dreamy space to be doing the art in,” she said.

Warden said she’d planned on taking 2-D art classes like painting, but she “stumbled” into metalworking when taking 3-D classes.

“The more that we got into stone setting, the more I was super into it,” she said. “I just loved designing stuff, I guess for myself.”

Soon after, she wasn’t just designing and building her own accessories on the side of her official classes projects. She was also filling orders for friends and others who caught on to her talent.

“It was kind of the beginning of the business,” Warden said.

Warden began placing orders for stones and turned her skills into a side hustle.

“I was always there after hours, and on the weekends in the studio busting out pieces from things I’d learned in class,” she said.

During summer breaks, Warden set up shop in her parent’s garage. Her workspace consisted of a little bench — jeweler-speak for a desk — from Home Depot and some folding benches. She used a basic set of tools and a flex shaft, a handheld tool used for drilling, cutting, carving and polishing jewelry.

She claimed the DIY setup wasn’t too loud — except for the occasional hammering.

“I focused on creating a small line of re-creatable pieces that people could order,” she said. “That developed into the classic collection, a lot of the pieces are still in that collection today.”

She treasures a box of some of those early designs, including her favorite opal cage ring, which she continues to carry in her store.

Outgrowing studio space and a store

There came a point when her professors pointed her toward books and videos to answer her detailed questions.

“In school you’re very focused on the basics and fabrication … and it’s more like art jewelry,” she said. “But I wanted to learn some of the more practical real world settings.”

Warden graduated from JMU with a major in art and a minor in art history in 2017. Afterward, she sought out an advanced education at the New Approach School for Jewelers in Tennessee for advanced stone setting.

She doubled down for 12-hour days during a week-long intensive program there before opportunity knocked in Richmond.

Warden said she had a colleague who shared studio space for artists, Mule Barn Studio, in the state’s capital.

“I decided I would … do the full time artist thing and see if I could support myself for a year before reassessing,” Warden said.

As her business grew, Warden launched a website and “jumped” from a 10-by-10-foot studio with no staff to a 1,000-square-foot store.

“I had to immediately go from being a one woman show to creating a business plan, having staff, hiring a bench jeweler to assist me so it was a lot of risk,” she said.

Recently, the business outgrew the space, which had room for one display case of engagement rings.

“We’d be so busy on Saturdays that you couldn’t even look,” she said. Couples would leave after seeing the huddle of people crowded around the case.

After looking for a place to lease for around a year, Warden moved her business into a new location that could fit more display cases and more space to work last month. But the move wasn’t all smooth sailing, she gutted the part of the building that became the store.

“I took the walls down and redid the flooring and rewired it,” she said, adding that she didn’t have prior familiarity with remodeling.

Every stone has a story

Perhaps part of the allure around Warden’s business is the emphasis on how jewelry is a form of storytelling.

In her college days, that topic was the center of Warden’s senior thesis. Now, the primary example of symbolic jewelry is an engagement ring. But Warden said people used to have pieces made to commemorate other major moments, such as mourning someone’s death.

Warden estimates she’s made more than 200 engagement rings this year, and she’s photographed each one. Sometimes those stones are from older pieces. Couples will ask Warden to combine stones from heirlooms belonging to their family members into one engagement ring.

“It just makes me really happy to see people have this sentimental wearable object that I had a hand in making,” she said.

Ethically sourcing the stones from around the world has also been a point of emphasis for Warden.

“The stone itself tells a story about where it’s been,” she said. “And when it’s purchased for someone we assign meaning to the piece.”

The formula for a young entrepreneur’s success depends upon whom you ask. Warden credits her mentor, Rooker, as well as having a good product, good branding and working extremely hard.

“I started out with a huge selection of pieces and then whittled down to what is the most popular,” Warden said.

Warden came into JMU with some experience with 3-D media like glass, which Rooker said gave her an advantage, in addition to her ambition early on in college.

“One of the faults of most artists and craftspeople is not knowing how to monetize their work, myself included,” Rooker said. “Since I don’t make my living from selling my work I make my living from teaching it, I’ve never had to develop that business mindset that she so clearly has.”

Rooker’s students follow Warden’s business on social media, and the professor said he believes her savviness with social media and shrewd marketing have contributed to her success.

But so, too, does her joy in metalworking and the stones, which translates to her work, Rooker said.

“Making something that makes you happy,” he said, “and that makes other people happy enough to pull out their wallets is a real skill.”

Jessica is a recent graduate of James Madison University. She studied media arts, journalism and political communications. Jessica has enjoyed providing the valley with thorough in-depth coverage for four years. She is passionate about reporting on women’s issues and social change movements. In the future, she’s hopes to write about politics, culture and people in D.C.