By Ryan Alessi with video by Ian Munro

Saturday’s city council immigrant forum revealed a philosophical gap between the five candidates – not necessarily over political ideology – but more broadly in how they view the relationship between government and citizens. The candidates, who are vying for two seats in the Nov. 6 election,  also differed over the council’s ability to actually affect certain issues, including access to health care and federal immigration policy.

A coalition of nine civic and immigrant community groups hosted the two-hour forum. And volunteers translated the candidates’ answers for attendees into Spanish, French and Arabic via headsets. Another group representing the Kurdish community was invited to participate but did not attend.

During the forum’s open Q&A session with the audience, the forum’s emcee and JMU associate professor of communications studies Carlos Alemán, asked a question inspired by an email from a community group, which Alemán didn’t name, that chose not to attend because, as the email writer asked, “Why bother?”

“What has been the biggest shortcoming of the Harrisburg City Council in serving the immigrant community that would cause that person to say, ‘Why bother?’” Alemán asked the five candidates.

It was one of several questions that revealed the different perspectives about local government’s role. That often meant the two candidates with experience on the council – Jones and Frank – had different takes than the other three, who are first-time council candidates.

“We have to be your voice,” said Frank, who served on council from 2000-’04 and again from 2006-’10. “But you have to tell us what the issues are, what you are facing … Everything isn’t fixable by government, but you live in a great community with a lot of caring people.”

Jones, who is finishing a four-year term on council, positioned himself as a pragmatist and broker.

“I’m not an activist. I’m not going to tell you all these great ideas that the city council should do but when I get elected I can’t do them,” Jones said later in the forum. “I actually do city council work. I negotiate on behalf of the citizens with the laws we have.”

Jones also urged those in attendance to tell council members what they want, such as changes to bus schedules. And, in response to a question about more inclusion in city government, Jones pointed to the city’s four-year old diversity hiring policy but said that only works if more people of color, immigrants and LGBT people apply for the jobs.

Though not directly in rebuttal, Romero, Saucedo and McMillan said at various points that many residents feel too disconnected from city government to speak up in that way.

“I can tell you that people have a perception that city council doesn’t care. Why is that? Because it’s always ‘Come to me, come to me, come to me,’” said Romero, who serves as Family and Community Engagement coordinator for the Harrisonburg City Public Schools. “So when I become elected and become the first Hispanic mayor of the city, I will promise you that I will create these intentional opportunities where people feel safe, where people feel welcome and where we actually will have very substantial conversations that will matter.”

McMillan, who runs an employment service, said he understands the challenges of working people, including immigrants who feel comfortable telling him how public services and local government need improvement.

“My employees that are Hispanic feel the frustrations of transportation issues, housing issues and educational issues, and those are the things they complain to me about with regards to the city of Harrisonburg,” he said.

And Saucedo, a social worker and community activist, said one of the clearest ways to help connect people to their government is to elect representatives to whom they can relate.

“We have to protect not only immigrants and LGBT people and people of color, but we need to protect women as well,” Saucedo said. “And the best way to do that is by having women in power … Men have let women down.” 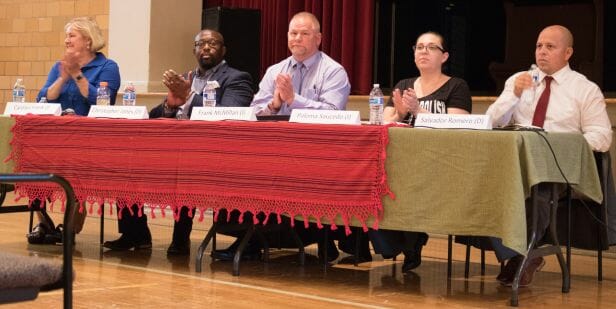 Other key points of the forum:

Most of the candidates agreed the bus system could make changes to better serve immigrants. McMillan, Romero and Paloma, for instance, all suggested printing schedules in different languages, 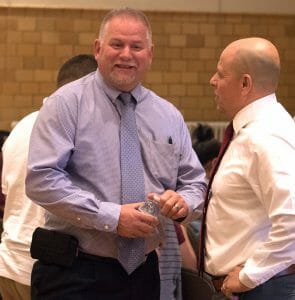 Frank McMillan chats with Sal Romero before the forum.

MCMILLAN: “I think it’s obvious we need to have better schedules. My employees are late almost every day because they ride a bus, and they don’t get them to work on time. They’re running anywhere between 10-15 minutes late.”

SAUCEDO: “The schedules – they don’t align with the schedules of working people or many times our high school students or even middle school students … Having different schedules, having more bus stops … and hiring more people who are multi-lingual and multi-cultural.”

FRANK – “I don’t know whether we’ve kept up with technology to say exactly where the bus is and when it will arrive … Like Chris Jones said, you need to bring concerns to city council and then they can give it to the department head to work on that. That’s how problems get solved.”

All five candidates acknowledged that Harrisonburg doesn’t have enough affordable housing to serve enough working families but each suggested different ways to alleviate the supply and demand imbalance.

Jones said changing zoning laws to encourage smaller lots for homes would allow builders to construct more of them.

Frank agreed with Jones about adjusting zoning laws for smaller lots but added that she also wants to keep property taxes from increasing.

On being designated a sanctuary city

One community asked whether the candidates believed Harrisonburg should declare itself a “sanctuary city,” a policy in which municipalities won’t cooperate with federal Immigration enforcement in detaining people based on their immigration status.

The other four said that could be counterproductive.

Romero said the sanctuary city designation has “backfired” in other communities by putting a target on them, including potentially losing federal funding.

“It actually encourages the police to go on defense,” Jones added. He compared it to unintended consequences of the 1994 federal crime bill, signed by then-President Bill Clinton, that exacerbated disproportionate arrests and incarceration rates for people of color.

McMillan said such a designation isn’t needed in Harrisonburg because police shouldn’t be looking to approach someone just to “ask them if they’re legal.”

“That should never happen,” he said.

“I don’t think it does happen,” she said.

The main education question focused on what specific program the candidates would like to see city schools implement to address the achievement gap for immigrant students. It offered another example of the different approaches the candidates took.

Frank said the council is responsible for appropriating funding to the schools – not for determining how it’s spent. That is up to the school board, superintendent and school leaders. 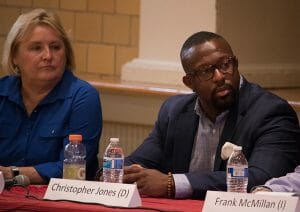 “I’m going to teach you something real quick: There’s a thing called political rhetoric, and then there’s answers to the question,” Jones said. “So I could give you a rhetorical answer about my idea of what a program I would like to establish, but the fact of the matter is if you vote for me and I win – or any of these other people and they win – they cannot influence a program on the education system.”

Romero, Paloma and McMillan answered the question by suggesting broad approaches they would champion, if elected.

Romero, referring to the four years he served on the state board of education, said Virginia should provide more flexibility to teachers to better prepare students for careers and/or college. But on the local level, the council is responsible for providing resources.

“We have to make sure we continue to fund the schools to the level that we need,” he said. “We need to continue to allow the teachers to be flexible in the way that they teach.”

Paloma said she wants to see schools to hire teachers with whom immigrant students could connect.

“We need teachers who are people of color, that are immigrants, that are from different background – different cultural backgrounds,” she said.

Watch the candidates’ final pitches to the audience: