The living room of independent city council candidate Carolyn Frank’s home is often packed with banjos, guitars and an assortment of chairs. Frank, a folk music fan, invites friends and family to listen to live music on occasional Friday or Saturday nights.

As one of five city council candidates, Frank is seeking to bring to city hall that approach of connecting with others.

“Sometimes people are going through really hard things and they need to know that somebody cares,” Frank said.

She’s hoping that will translate into votes next week, as she seeks to return to city council by winning one of two seats in the Nov. 6 election. Frank served on city council for eight-and-half years, including from 2000-2002 when she was Harrisonburg’s first female mayor. She is running again on a platform highlighting her concerns about rising taxes and costs, which she says could force people and businesses out of the city.

“The main concern I had was the city is becoming unaffordable, especially for our young families, our senior citizens, and local businesses,” Frank said.

As one example, Frank pointed to the United Way’s ALICE report from July 18, 2017. ALICE stands for: asset limited, income constrained and employed. And the report showed 26% of Harrisonburg’s population lives below the poverty level and many more are barely scraping by.

“They want to live here,” she said. “They are invested in the community and care 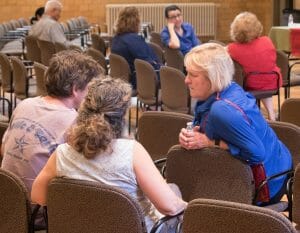 about the community, but they’re on a limited income now. I have a real concern for those people.”

“I think it drives poverty more when you keep raising taxes because landlords are going to raise rents to cover that, and we’re already talking about how there’s not enough housing in Harrisonburg,” she said.

One of the most contentious community discussions in recent years has been over the cost of building a new high school to alleviate overcrowding at Harrisonburg High School. The council in January approved moving forward with building a new school for an estimated $76 million to open in 2023.

But Frank said the total cost wasn’t her only concern. The council in July approved a $5 million purchase of land from JMU to be the site of the new school.

“The citizens I’ve talked to are not happy about the site. They felt like, ‘Where was the other land? Could you show us, talk about why this came to the top? What were some of the other things and why?’ And they want to know,” Frank said.

Frank said the land is zoned for industrial use.

“So in a perfect world, I would like to see an Amazon warehouse or some kind of industry to come in here,” she said.

In the meantime, Harrisonburg High School has about 1,800 students enrolled when it was built for a capacity of 1,360. That overcrowding isn’t lost on Frank.

“I would like to try to do something immediately to relieve the overcrowding. Different scheduling, year round schools that could alleviate the overcrowding right away which leaves time to look at the growth trends.”

Frank has a record of blazing trails.

She spent 38 years working for the phone company, including in jobs that mostly men did.

“I was one of the first line persons—it was called linemen then,” she told the audience at an Oct. 8 forum. “I was the first woman that left the traditional clerk-secretarial role at the phone company and went out and joined the men and actually climbed telephone poles.”

Her interest in electronics spurred her to take technical classes—again, with mostly men—so she could enter the communications technology field.

Carol Parker, a friend Frank’s for the last 43 years who worked with her in telecommunications and volunteers for Frank’s campaign, said Frank’s mindset had a lot to do with her becoming the first female mayor of Harrisonburg.

Parker said Frank thinks about breaking barriers as: “I have comparable skills and if I qualify then I should have this job and work as hard or harder than the men, to be successful.”

Parker also praised Frank for her eagerness to reach out to and connect with others.

“If she is at any event, or anywhere you meet her on the street, she always open, inclusive and always has the same demeanor, same care about others and is always passionate about her city,” Parker said.

When Valley Mall opened in the mid-1970s, many businesses began gravitating to the east side of town.

“Almost overnight, the mall came in, and that was in the county then, and the downtown just dried up,” Frank said. She wanted to see more businesses return to downtown.

Eddie Bumbaugh, the first director of the Harrisonburg Downtown Renaissance, said Frank understood how important downtown Harrisonburg had been before “in terms of it’s vitality and being the center of business for the community.”

Bumbaugh said Frank always has been “sensitive to public expenditures” but recognized that certain initiatives are worth the cost because they can spur economic growth and, thus, more revenue.

“When the proposal to create the Harrisonburg Downtown Renaissance with some city funding came up, it was clear to me Carolyn saw this not as an expense but as an investment,” he said.

Downtown Renaissance and the city’s membership in Main Street USA, a nationwide group that seeks to support local small businesses in downtowns, the old town center of Harrisonburg has flourished with dozens of businesses.

Because Harrisonburg is 17.4 square miles, space and affordable housing are in high demand—especially considering JMU’s growth in terms of construction and enrollment over the last 20 years.

“My opposition to Carolyn is that she’s opposed to student housing, but she has rentals of her own, which I thought was a conflict of interest when it came time to vote for student housing in Harrisonburg,” Forbes said.

Frank owns six properties in town, according to the city’s property records.

But Frank said owning individual rental homes isn’t what has caused such sharp growth that city services have struggled to keep up with.

“We’ve had a proliferation of student housing here in Harrisonburg, and it’s become low-income housing, that’s why our schools are overpopulated. We have built places for students that are now housing large families—it wasn’t meant for that,” she said. “It really messed up our growth.”

She said rapid development of dense housing makes it feel “like we’re building more bedrooms than we have students.”

“And what happens is the students always go to the nicest and best, and it creates a problem for the city,” Frank said.

Between April 1 and October 25, Frank’s campaign received 105 donations totaling $13,720, according to the Virginia Public Access Project.

“I’ve raised more this time than I’ve ever raised,” Frank said, “and it’s because people are concerned about the spending.”