Behind the Scenes at the Polls: On the Job with an Officer of Election 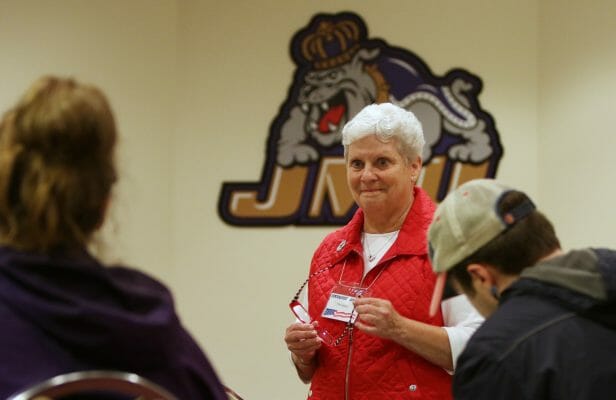 Pat Haden, a Chief Officer of Election, helps voters who come in with questions about their registration at the JMU Convo Center, which is the polling location for Harrisonburg’s 5th precinct, on Election Day, Nov. 6, 2018.

By the time the polls opened at 6 a.m. on Election Day, Pat Haden had already been on the job for over an hour. As a Chief Officer of Election, Haden’s day had started in the wee hours of the morning as she prepared to be at the JMU’s Convo Center at 5 a.m. There would be a flurry of activity in that hour before the first voter could arrive. 2018 will mark the seventh general election Haden has worked in Harrisonburg.

“I retired in September of 2012 and that was the presidential election year. I had always thought that once I was no longer working and had an opportunity to do volunteer work that [working as an Officer of Election] was one of the things that I wanted to do,” Haden recalled. “So I worked that election in November.”

Haden started out that first year handing out ballots to voters once they had checked in.

“I wanted to see how the system worked. I was very curious about that,” she said. “I have voted ever since I was eligible to vote. I feel like it’s such an important part of being an American citizen. I just wanted to be part of the process.”

Starting out, Haden’s greatest fear was that she would make a mistake, though poll workers are given mandatory training before every election to remind them of state regulations and to go over any new voting laws. Those initial fears have long since passed as Haden has moved up into the position of Chief Officer of Election for a precinct for the past three years.

“The most important thing is to keep the process moving and make sure that anyone who comes to vote has that opportunity,” Haden said of her role as precinct chief. 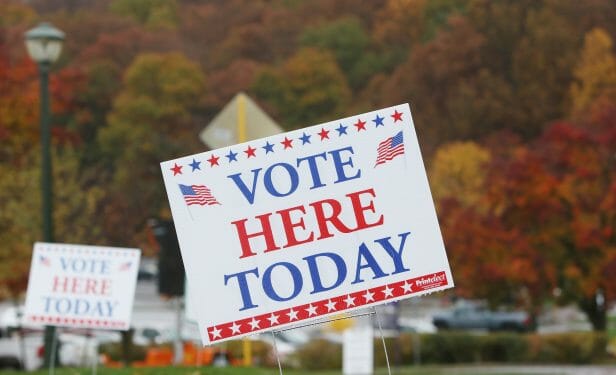 Signs point out the entrance to Harrisonburg’s 5th precinct’s polling location at the JMU Convo Center on Election Day on Nov. 6, 2018.

The Convo Center is the polling location for Harrisonburg’s Precinct 05, an area that roughly covers the JMU campus and is framed by Main Street, Martin Luther King Way, Reservoir Street and University Blvd. By the time poll workers arrive the voting machines have already been delivered. Tom Miller, Haden’s co-chief, will pick up the day’s ballots on the way to the polling center, along with the keys and memory cards for the voting machines. When he arrives at the polls, all the other workers witness him and Haden unlock the voting machines and load the memory cards. Before voting starts, all ballots must be hand-counted as part of a strict system that must account for each one.

While Officers of Election are required to state their party affiliation (or independence) and a locality’s Director of Elections tries to make sure there is equal representation amongst Democratic and Republican poll workers at each voting center, Haden says the job is not partisan.

“We don’t discuss who our candidates are. We’re there to do our job,” she said.

It might be the greatest show of cross-the-aisle cooperation in our current political climate, even though it takes place on the day when political tensions are running their highest. Poll workers even plan in advance and everyone brings food to share on Election Day as Officers of Election cannot leave the polling center until the polls have closed.

A voter fills out a ballot at the JMU Convo Center, which is the polling location for Harrisonburg’s 5th precinct, on Election Day, Nov. 6, 2018.

A voter fills out a ballot at the JMU Convo Center, which is the polling location for Harrisonburg’s 5th precinct, on Election Day, Nov. 6, 2018.

Once voting has ended, the election officers lock the doors and began to break down the voting center. Vote totals are printed off and documented and machines are sealed. On a good day (an off-season election perhaps) they can wrap up a polling center within an hour of polls closing at 7 p.m. and be home soon after eight. During a presidential election it might take until 10 p.m. or later until all of the day’s tasks are complete, making for a 17-plus hour day. In Harrisonburg, Officers of Election make $175 for their long day’s work manning the polls, with each precinct’s chief earning $225.

So when do poll workers, like Haden who has never missed an election, vote? If they are serving in the precinct where they are registered they can cast their ballot during a lull in the action. If they’re working at another precinct they have to vote absentee before Election Day.

Poll workers are rotated between each of Harrisonburg’s eight precincts year by year. Haden has served at five during her seven years, but never at her home precinct. Over the years she has begun to recognize some of the voters. One in particular sticks out in her mind. It was a new citizen who was participating in his first U.S. election.

“[He was] so proud and so happy. He wanted his mom to take his picture,” Haden recalled. “And to think there are so many people that don’t even bother to vote and here was this young man who was so proud that he was voting for the first time.”

Each voter can receive a sticker to wear as they exit the polling location.

What are Haden’s expectations for the 2018 mid-terms?

“I think we’re going to have a busy day,” she said on the Friday before Election Day. “I think that the election in Virginia this year has gotten people very excited about the issues and what’s generally going on nationally has gotten people much more excited and interested in participating.”

By mid-morning on Election Day, there is a bit of a rush at the Convo polling center. Passing through a gauntlet of campaign signs and volunteers handing out literature, voters are herded into a purple-carpeted suite across the hallway from the arena. Haden and Miller staff a table where voters can change their address, if they have moved within the precinct where they are registered, or sort out issues with their registration. Things are hectic, but everyone is smiling. It’s Election Day.

“For most everyone it’s about getting out, being patriotic, voting and getting their stickers,” Haden said. “It’s their time to be a good citizen.” 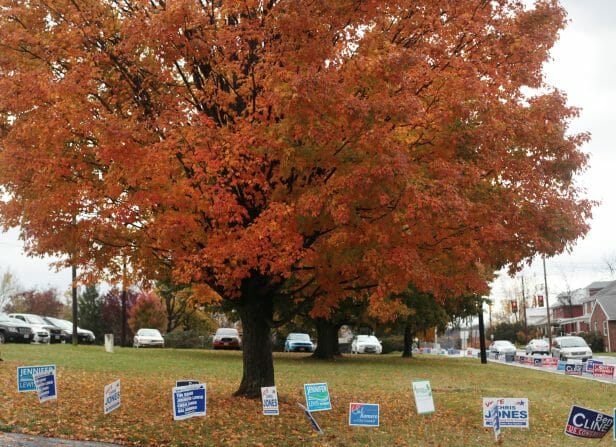 Political yard signs line the streets around Waterman Elementary School which is the polling location for Harrisonburg’s 1st precinct on Election Day on Nov. 6, 2018.