In a city with a growing Latino population, there has never been a Latino voice on city council. That will change in January when Sal Romero is sworn in. And Romero, a Democrat, also could become Harrisonburg’s first Latino mayor.

He said Wednesday, a day after his definitive win in the council campaign, that it’s time to have someone on council who understands what it’s like to be an immigrant.

“It’s a great step moving forward,” he said. “When we speak about the Latino community, we are really encompassing a number of communities. It’s very different 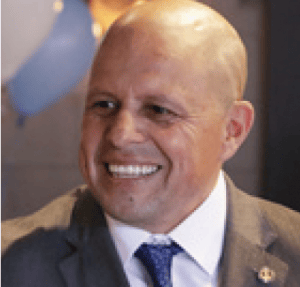 to be Puerto Rican than to be somebody from South America. The many Latino communities in Harrisonburg I have kept in contact with, so I hope to be someone that can essentially represent their voices and values.”

On Tuesday, he had garnered the most votes of the five candidates who were competing for two council position. Romero’s 6,737 voters were 550 more than the next place finisher and winner of the second seat up for election, Councilman Chris Jones, who was the other Democrat in the race. Romero’s total was nearly 2,500 more than the third-place finisher.

Harrisonburg’s mayor serves a two-year term, and that means that current Mayor Deanna Reed will finish her term in January. Traditionally in Harrisonburg, the winning candidate with the most votes in the previous election becomes the mayor by a city council vote, putting Romero in line for that position.

Joe Fitzgerald — a former mayor and councilman who served as 6th Congressional District Democratic Chairman from 2013-2017, said selecting the mayor based on votes has mostly held true in recent years.

“The tradition comes and goes,” said Fitzgerald, noting that in 1994 a majority Republican council voted against the Democratic top vote getter, and in 2000 the vote was split 3-2 on the city’s first female mayor, Carolyn Frank.

Fitzgerald also noted that while he believes Romero has received the most votes ever in a non-presidential campaign, current city mayor Deanna Reed still holds the record for receiving the most votes in city history with just over 9,000 in 2016.

Romero said if that’s what the council members want he would very seriously consider the position. He said it’s too early to commit and that he needs to look at what the job entails and how it would affect his current job and the responsibilities he has with the public school system.

Because Chris Jones, the night’s other big winner, is already on council, Romero will be the only newcomer in January. He said that because of his experience serving four years on the Virginia State Board of Education he has a strong grasp of how government organizations work. He said he wants to meet with the city manager before taking office to really understand the community’s needs and the current issues on city council’s radar.

“I am definitely one of those people who want to understand more,” he said. “By my first city council meeting, my goal is to have had meetings with staff at the city who can brief me on some of the issues at hand and the logistical piece of coming in and how council members typically get information.”

He said that although he ran on platform that stressed education and inclusion, he realizes that city business encompasses much more than the two. He said he is looking forward to working on solutions to homelessness in the city, availability of affordable housing, improvements to the recycling program and increasing installation of solar panels around the city.

Throughout the campaign, Romero also highlighted his support for building the new city high school.

Newly elected Harrisonburg City school board member Obie P. Hill said he’s excited to work with Romero, Jones and the entire city council, noting that the election results are the sign they needed that residents want the new high school built. “I really think our future students are going to appreciate the work that we will all do in the next few years.”

“From the get go of my campaign we talked about HHS2, and so I’m sure that’s the first issue that will come up. That’s the first issue I would like to come up in January,” Romero says. “The city is looking forward to us moving the second high school forward as soon as possible.”

Harrisonburg High School, which opened in 2005, has a capacity of 1,360 students, but enrollment now nears 1,800, according to the city public schools.

Cathy Copeland, a former Democratic candidate for the 26th House of Delegates district was at the Democrats’ Capital Ale election watch party Tuesday night. She said she hoped Romero’s election and Jones’s re-election will accelerate the process.

“We are hoping for a 2022 start date for the new high school, and hopefully they will bring a motion to city council so that we can get it a year earlier, saving about 800 people from being in trailers during their time in high school,” she said.

Romero’s support came from across the city, which was evident early on Tuesday night when vote tallies first began coming in.

The employees of the Harrisonburg voter registration office congregated in a small office in the back of City Hall Tuesday evening as the numbers from voting precincts starting coming in on the city council race.

It was clear soon after returns started rolling in that it would be Sal Romero’s night.

The win was a stark contrast from his losing bid for council eight years ago when the high school principal and administrator was less well known.

Fitzgerald, the former mayor, crunched the numbers and sees a 35% increase in local voter turnout across the city from last year’s election for governor. The highest turnout increases occurred at Stone Spring Elementary with a 43% increase and JMU’s convocation center with a 47% increase in turnout.

Romero and Jones will be sworn in to office in early January and will both serve four-year terms.