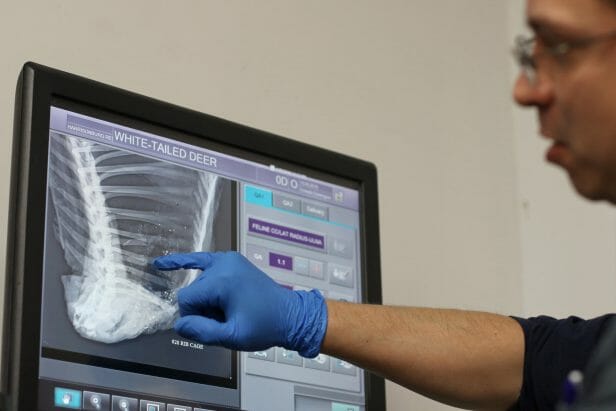 Dr. Ernesto Domínguez of The Wildlife Center of Virginia examines a radiograph of lead bullet fragmentation (visible as little white specks) in a white-tailed deer rib cage, part of a study that Harrisonburg High School students are conducting in their Governor’s STEM Academy biotechnology class.

Harrisonburg High School teacher Myron Blosser’s educational philosophy goes something like this: “Any time you do something you build more emotion than when you just see or read something.”

This Wednesday, that “doing something” had his students piled into the small radiology room at The Wildlife Center of Virginia in Waynesboro, peering x-ray images displayed on a computer.

“Yep,” one student called to Blosser, who was crowded out into the hallway. “This one’s got lead in it.” 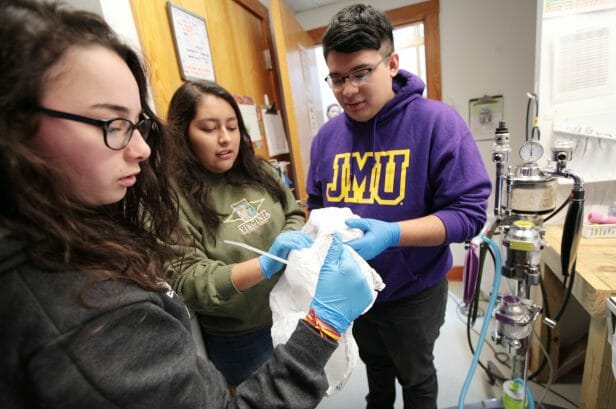 Harrisonburg High School students in a Governor’s STEM Academy biotechnology class place donated hearts and lungs of white-tailed deer on a radiograph table at The Wildlife Center of Virginia.

The blue-gloved students grab a new bagged sample out of a cooler and place it on the x-ray table before exiting the room so that Dr. Ernesto Domínguez, hospital director and head veterinarian at The Wildlife Center, can trigger the machine. Image after image showed white-tailed deer hearts, lungs and rib cages in various shades of x-ray gray.

Blosser, co-director of the Harrisonburg High School Governor’s STEM Academy, is also the instructor for the academy’s capstone biotechnology class. Each year Blosser picks a research project for the class. Last year, it was examining black bear scat for signs of deer DNA to determine if the local bear population was feeding on white-tailed deer.

“In the biotech class, every year we try to pick something that is an authentic research piece for the kids to work on,” he said. 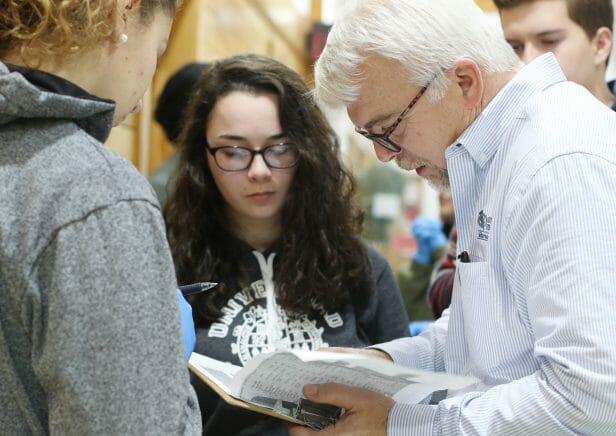 Myron Blosser’s students in his Governor’s STEM Academy biotechnology class are examining the human and environmental health impacts of bullet lead spreading through organs and muscle tissue in deer killed during hunting season.

This year, the class is looking for lead fragments in deer killed by hunters. Their bullets are typically composed of a lead core surrounded by a copper jacket, or are made entirely of lead. When a bullet strikes a deer, even if the main part exits the animal, small fragments of lead can break off and remain in the tissue.

The idea started a year ago when Blosser’s son Kurtis, a professional videographer who often works with outdoors programs, was interviewed by WMRA for a story about lead toxicity in wildlife.

“They came out and interviewed him about how shooting a deer gets lead into the food chain,” Blosser recalled. “And I had never thought of that before.” 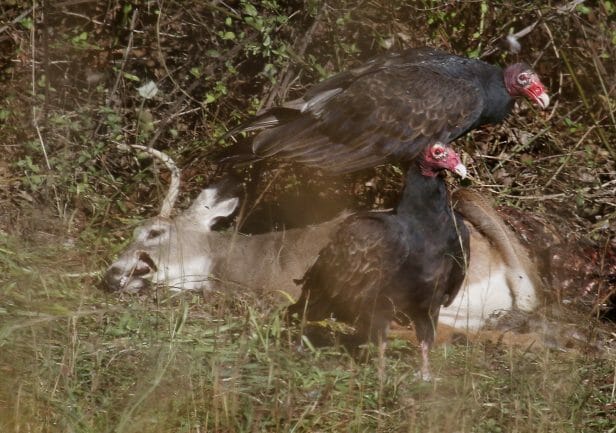 Then, this August, Blosser and his son were riding together when he overheard a podcast Kurtis was listening to about the link between lead in deer carcasses and the health of California condors. At that point Blosser believed he had a research project for his students.

“There had been some research already done out West and I thought, why don’t we do that back East,” he recalled?

To get around the difficulties of obtaining and x-raying entire deer carcasses, Blosser considered examining the part of the deer most likely to shot by a hunter. 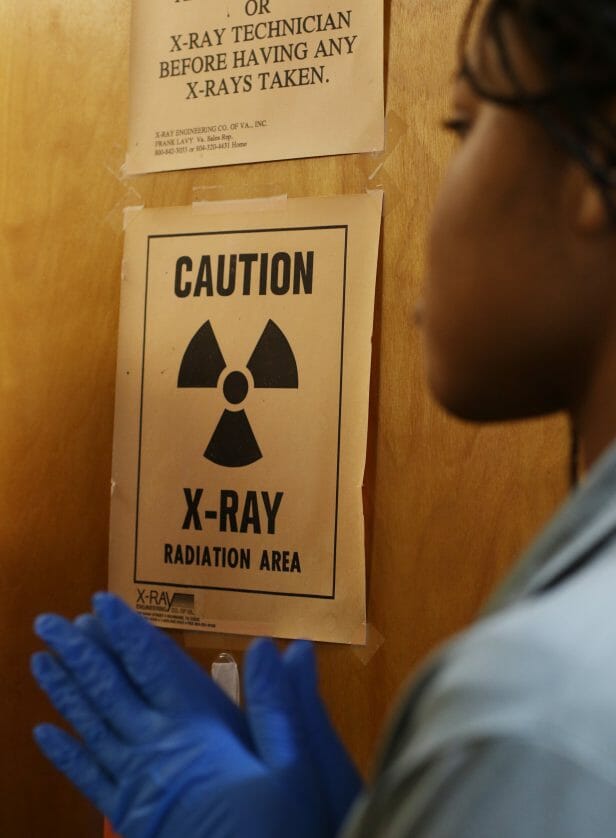 Using radiography at The Wildlife Center of Virginia, students are examining how lead affects the safety of human consumption of hunted deer meat as well as potential lead toxicity in birds and animals scavenging on the carcass.

“So then I started thinking, what part of the deer has the lead that is getting into the food chain? It would be the entrails. It would be what the hunter doesn’t take out of the woods. So the idea is when a hunter field dresses an animal they leave the entrails behind and that’s what I want,” he said. “That’s what the scavengers are eating. So that gave me my focus on what is left behind”

The students placed fliers around Harrisonburg and Rockingham County asking hunters to bring in the heart and lungs from the deer they harvested during the fall hunting season. Blosser was hoping to get at least 50 samples. They received 60. Some came from hunters who saw his posters and others from a butcher who processes wild game. Each sample is documented as to what type of firearm was used, what type of bullet and where the kill shot was placed. 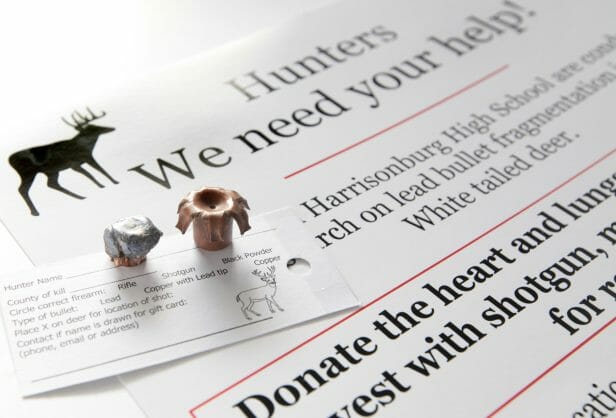 Blosser put out a call to hunters to bring in the organs of deer they harvested during hunting season for his students’ project. Pictured on left is a conventional lead bullet with a copper jacket extracted from a deer compared to a solid copper bullet also removed from a deer.

On Wednesday, Blosser and his students journeyed to Waynesboro to take a first look at what they had collected. After searching unsuccessfully for a facility to x-ray his samples Blosser contacted the Wildlife Center. The students’ project was a perfect match for the Center’s mission.

“We partner with universities and veterinary schools around the U.S. because we have limited resources here, but also limited time to do certain things that other people can do on a daily basis,” said Domínguez, who noted that this was the first time the Center had partnered with high school students on a project at this level. “So these partnerships allow us to provide what we can do here, while gathering better information and resources from other locations.”

“When are we going to use this in the real world?” It’s the cliché question in a mathematics class, but one that Blosser says he never gets from his biotechnology students.

“This is one of those projects that, I think, is education at its best because it brings in a real question. We’re trying to answer a real problem. So the students are excited about doing research on something that their teacher doesn’t know the answer to,” Blosser said. “And that’s rare in the educational environment at the K-12 level. In addition, the students are meeting the stakeholders. They’re meeting the hunters. They’re meeting the wildlife and the researchers from the Wildlife Center. So when you have that kind of stakeholder interest in what a 17-year-old is doing that really brings excitement into the classroom.” 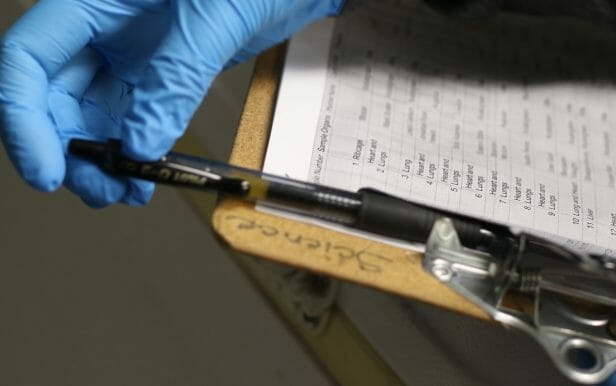 Harrisonburg High School students keep a chart of the donated organs of white-tailed deer showing where they were shot, what type of firearm and bullet type.

The excitement was evident as the students gathered in the hall to discuss and compare their findings as the x-ray machine buzzed in its next image.

“The study that you all are doing, I cannot overstate the potential implications of this, not only here locally, but across the state and nationwide as well,” Ed Clark, director and founder of The Wildlife Center said as he addressed the students while they took a break from the radiology room.

One sample tested Wednesday held particular interest for the class. When a hunter returned to the gut pile to retrieve the heart and lungs for the study, an eagle was already there feeding. The hunter made a video of the encounter, which Blosser shared with his students.

“For them, even though the bald eagle is an emotional emblem they still didn’t have that context. If that sample has lead in it, then for them that’s a direct connection between lead and bald eagles,” Blosser said. “They needed that connection. That’s another piece that we as educators look for. Education has got to be emotional. So that emotional context for me as an instructor, that’s what I’m after. So if I can put emotion into the lessons the kids will remember it 30 years later. If I don’t they’ll forget it in a week.”

“So for me I’m always looking for that emotional connection with everything I do,” he added. “I try to make everything I teach come home somehow. That video of that eagle flying away from that gut pile, for some students that was the first time it came home.”

The x-ray showed the sample that the eagle was about to feed on contained lead fragments.

“See,” Blosser told his students. “Your research is already potentially saving eagles. If that hunter hadn’t collected that sample for us the eagle would have eaten it.” 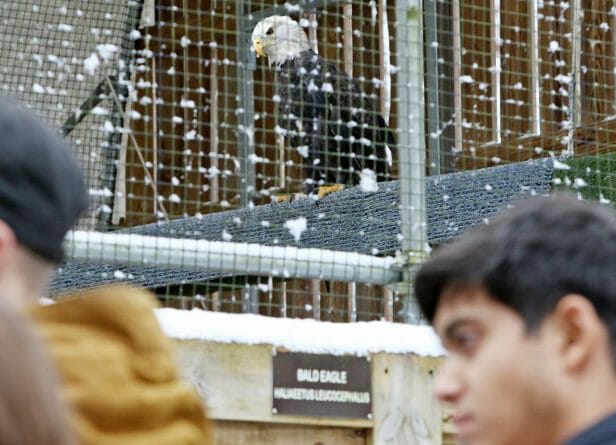 Harrisonburg High School students in a Governor’s STEM Academy biotechnology class visit the outdoor enclosures at The Wildlife Center of Virginia in Waynesboro. One aspect of their study examines the effect of lead fragments in deer carcasses on bald eagles and other scavengers.

The research has implications for human health as well, for those who consume the deer meat. Blosser himself donated a sample from a deer that he harvested this hunting season.

“So that’s what I see us doing – gathering data so people can make informed choices,” he said “I have to be honest. I thought about that when I butchered the deer I shot. It made me think about how big of an area around the wound did I want to save meat? So I’m anxious to see the data.”

“There are two big things that are valuable for us and valuable for them. One is that we are mainly a teaching and education facility, so this way we help the new generation to better understand the importance of environmental research for conservation purposes,” Domínguez said. “The second is that we are continuing our mission to educate the new generations to care for wildlife and also care for the environment and care for the concept that we call ‘one health.’ These types of projects help us understand better that keeping the environment healthy allows us to keep animals healthy and then also humans healthy.”

The students in the Governor’s Academy biotechnology class will spend the year gathering and analyzing their data. Their findings will be presented in the spring at James Madison University’s science fair, as well as at a presentation of Governor’s Academy student projects at Harrisonburg High School.