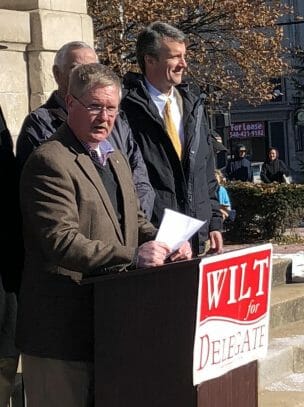 “We must start this work now, and we have to listen to all of the residents of Rockingham County,” he said.

Joining Wilt on the courthouse steps were State Sen. Mark Obenshain, House Majority Leader Del. Todd Gilbert, and Congressman-elect Ben Cline, all Republicans, along with a number of other local officials. In a statement released Tuesday, Wilt gave his support to “policies that provide opportunities for individuals and families through limited government, a strong education system that empowers teachers and parents, and a balanced approach to environmental and water quality issues.”

The 26th District, which covers the City of Harrisonburg and much of northern and western Rockingham County, has been reliably red in recent years. Over the past decade, voters in the district have voted Republican in every major race, from presidential and senate races to state offices – even when nearly all of those Republican candidates lost the statewide vote. Last month, however, Democratic Sen. Tim Kaine broke that streak, garnering 50 percent of the 26th District vote, on his way to a comfortable win over his Republican challenger, Corey Stewart, who got 47 percent of the vote in the 26th District.

Building on large turnouts and strong showing for Democratic candidates – particularly in the city –  in the recent midterms, Finnegan and Cathy Copeland have already announced early bids for the 2019 Democratic nomination. Both campaigns emphasize working families’ concerns, including fair wages, better access to healthcare and better educational opportunities.

“It does seem like the Democratic party, or the people who identify as Democrat, are energized,” Wilt told The Citizen in a separate interview. “But when we look at the local level, even though I’m a Republican, these things, like having a well-paying job and a good atmosphere to work in, these things resonate across boundaries.”

He also addressed those issues at his campaign launch.

“As a compassionate society, we must support the most vulnerable among us,” Wilt said. “But we also must stop victimizing those capable of helping themselves.”

Dan Cullers, chairman of the Rockingham County Republicans, said the Democratic party is “more energized than it was two years ago.”

“They’re increasing numbers and organization,” he continued. “They’re trying to close the gap, and we have to step up our game as well,” he said.

Cullers said being the incumbent will be an advantage for Wilt in the upcoming race, along with his track record as a delegate over the past eight years.

“I don’t see [him] changing,” Cullers said. “That’s the nice thing about Tony: what you see is what you get. He treats everybody with respect, he’s willing to talk across the aisle and compromise, and he’s always trying to explore new ideas and solutions. I don’t think you’re going to see Tony … change, and I’m thankful for that.” 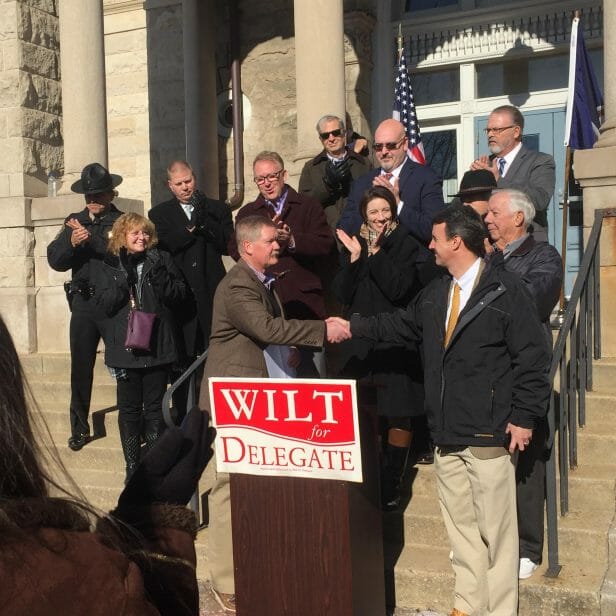 Wilt emphasized that the upcoming campaign will not distract from his upcoming work at the General Assembly, which begins its 2019 session on January 9.

“Even though this campaign is out there in the future, my full focus will be on the session at the House of Delegates serving the state of Virginia and the good people of the 26th district as fully as possible,” he said. “That’s what I was elected to do, so that’s where my attention will be.”

One of the top priorities Wilt mentioned during his announcement are the impending decisions regarding I-81 upgrades and funding that will face the legislature next month. Wilt characterized it a bipartisan issue, saying that elected officials from across the region will be responsible for making it a reality.

In introducing Wilt at Tuesday’s announcement, Congressman-elect Ben Cline recognized Wilt for his work with several committees, including the Agriculture, Chesapeake, and Natural Resources (ACNR) committee.

Chesapeake Bay restoration has been a focus of Wilt’s legislative career. In addition to the ACNR, Wilt has also served on the Chesapeake Bay subcommittee, and last fall, was appointed to the Chesapeake Bay Commission, a tri-state legislative body with representatives from Pennsylvania, Maryland, and Virginia. Wilt said he has enjoyed his time with the commission and is proud of the successes it has had.

“It’s a great success story. The Chesapeake is cleaner than it’s been in 40 years, thanks to those efforts, and I wasn’t there when they started, but I’m happy to have been a part of it,” he said. “I don’t let party politics come into play when it comes to that issue, or with any issue, I’d like to think. I think that’s something that I’ve proved to people over the years, I do my best to make my decisions on the merit of the legislation rather than the politics of it.”