As police still investigate racist fliers dropped at Bridgewater College, media continues to wrestle with coverage of it

On the way down Dinkel Avenue on Bridgewater College’s campus Monday, Nov. 26, a student found half-a-dozen baggies containing fliers espousing racist and anti-Semitic sentiments, the latest in a string of instances in Virginia over the last year.

“They were in baggies weighed down with bird seeds, so that leads us to believe they were thrown out a car by someone passing by,” said Abbie Parkhurst, associate vice president for marketing and communications for Bridgewater College.

The Virginia State Police investigated. They compared the fliers to ones distributed in Loudon County and Fairfax County and “believe the materials originated from a hate group based in North Carolina,” according to an email update Bridgewater Campus Police Chief Milton Franklin Jr. sent to the campus community Dec. 13. Franklin added in the message that local and state police are continuing to investigate the matter. 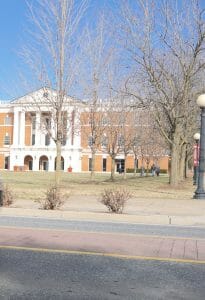 The stretch of Dinkel Avenue in front of Bridgewater College where the fliers were found.

For the campus, it was startling.

“I understand that the actions of such groups are hurtful to many in our community,” Bridgewater College President David Bushman said in a public statement. “To be very clear about the College’s position: White supremacy, or any other doctrine that seeks to demean or marginalize any group is abhorrent and has no place at Bridgewater College.”

For Bridgewater’s student newspaper — the only media outlet to have covered the incident at the time — it was news.

Jessica Brophy, an assistant professor of communications at Bridgewater College and the faculty organizer for the student newspaper, Veritas, said word about the fliers hit just before the paper’s weekly club meeting. After talking about the news-gathering challenges, “we talked about what more we wanted to know,” Brophy said. “We had a conversation about how to have this conversation.”

The fliers “were meant to intimidate and harass and terrorize people,” Brophy said. “The question becomes: How do we cover this in a way that doesn’t glamorize the event, and therefore encourage people who might be emboldened to do something further? And yet it is something that is happening on our campus and is news.”

It’s a complicated debate that’s been repeated in newsrooms across Virginia and the nation. In 2018, flyers containing hateful messages were found at the University of Massachusetts, Vanderbilt University, University of Montana, Roanoke College, among others. An October 2017 report by the Southern Poverty Law Center indicated the targeting of campuses, in particular, is deliberate.

The tactic, which the Southern Poverty Law Center dubbed “flyering,” has “the distinct ability to draw attention to the group and cause while keeping the member in the shadows.”

Jessica A. Johnson, a lecturer in the University of Washington’s anthropology department and the author of the academic article “The Self-Radicalization of White Men: ‘Fake News’ and the Affective Networking of Paranoia,” told The Citizen those behind the fliers are seeking to “create a sense of paranoia, fear, threat and to agitate people such that these stories blow up.”

“They’re trying to agitate people so they feel uncomfortable in their own institutional homes and they’re being successful at that,” she said.

She said media can avoid giving publicity to these views by focusing on “people most affected, rather than just reporting on the actual event — honor the actual impact of these events so that it doesn’t really give license to the groups that are posting literature.”

Johnson argued that this approach actually reframes the discussion in terms of “here’s the harm being done.”

“People like a Richard Spencer or a Milo Yiannopoulos or some of these other figures that have made bigger splashes, are certainly more calculated,” Johnson said, “and have more media savvy, when it comes to ‘Okay, here’s how we’re going to rally the troops vis-a-vis the media.’”

Monica Robinson, president of the NAACP’s Harrisonburg-Rockingham chapter, said there should be more conversation about the effects of the hateful fliers.

“Such a small number of flyers being found makes me think that there is also someone in the background saying, ‘If we drop off 25 flyers, maybe that small amount we could get in — do the crime — littering, and then leave, maybe someone will speak up and then we will get media attention,” Robinson said. “The purpose will be two-fold — to get that media attention, to get that name back out and let people know the KKK still exists and is recruiting, but also to get a lot of rural people to come out of the closet since Trump has taken office.”

In fall 2017, residents in Staunton and Waynesboro found Ku Klux Klan fliers in certain neighborhoods. The local newspapers covered the event, as well as the resulting community outrage over the racist language. In Waynesboro, the anger over the white supremacist’s fliers spilled into the next city council meeting.

NBC-29 WVIR Charlottesville covered the incident on its website, providing a photograph of the document with enough information to confirm KKK labelling, but with the actual messages on the flyers blurred out.

“The nature of the crime and how you do it isn’t what needs to be focused on,” Robinson said, “I think we need to focus on what information is being disseminated when these flyers are thrown out,” Robinson pointed out. “I think some of the language within there must be known to residents.”

The exact contents of the fliers at Bridgewater College haven’t become public.

“The content of these leaflets would be disturbing to anyone because of the virulent and disgusting language,” Bushman, the president, said in a statement to the campus community. “The flyers included blatantly false and ignorant narrative (sic) related to race and interracial relationships as well as anti-Semitic language targeting high-profile individuals in the national media.”

Danielle Brooks, the Veritas’s editor-in-chief, said it was difficult to track down much information about the incident. The resulting article, placed at the bottom of the front page, focused on statements from campus leaders — such as the president and police chief, as well as Associate Dean of Students for Diversity and Inclusion Robert Bryant. They condemned what the fliers said and sought to reassure the public.

Parkhurst, the college spokeswoman, told The Citizen that college officials and local and state police are still searching for clues about who was behind it, as well as a second incident the following day involving hateful DVDs dropped around campus.

“We are doing a number of different things to find out who placed these,” Parkhurst said. “We’re hoping we might be able to fingerprint or find metadata.”

As far as how the community can respond, Elizabeth Nathanson, vice president and political action chairwoman of the Harrisonburg-Rockingham NAACP, said area residents have the power to counter messages of hate so that sentiment doesn’t spread beyond the plastic baggies in which they’re dropped.