Of all the city projects retiring Councilman Byrd helped shepherd, he says one stands above the rest 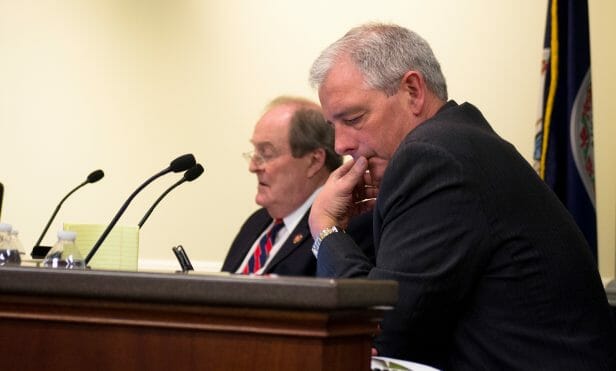 Councilman Ted Byrd, a former Harrisonburg mayor who is retiring after 12 years on the council., contemplates city business during his final meeting on Dec. 11.

During Ted Byrd’s final city council meeting last Tuesday, Mayor Deanna Reed ran through the long list of projects and committees he has worked on during his 12 years of service as a council member, including serving as mayor from 2013-2015.

But one of his contributions she will miss most, teased Reed, is how fast Byrd can add numbers in his head. That talent has been clutch in helping him achieve his top priority as a council member – “making the necessary infrastructure investments for the city to develop and grow and doing so in a fiscally responsible manner,” Byrd said.

Byrd has had a guiding hand in many of Harrisonburg’s major infrastructure projects in the last decade:

But the project he says he is most proud of is the “A Dream Come True” park on Neff Avenue, which opened in 2010. The park, built with equipment that allows children with disabilities to play alongside their peers, was first envisioned by a group of Girl Scouts.

The city council then ran with the idea, building it on city-owned property. Byrd said that’s an example of “when government did the right thing for the right reasons.”

Calm in the stormwater

Byrd is soft-spoken, and not one to boast. His contributions to the city often took the form of tackling problems that had to be dealt with as opposed to making flashy new proposals. For example, Harrisonburg is required by the Virginia Department of Environmental Quality to limit the amount of nitrogen and phosphorus that enter stormwater runoff and eventually flow into the Chesapeake Bay.

Kai Degner, who served alongside him on the council from 2009 to 2016, says Byrd was the council member who “did the heavy lifting” on creating a method to address this issue.

As part of a committee with city staff, Byrd helped introduce a stormwater management fee, which charges city property owners a twice-yearly fee based on the amount of “impervious surface,” such as cement patios and asphalt driveways, on their property. The council instituted the fee in 2015. This income then allows the city to make stormwater infrastructure improvements, such as stream bank restorations and regular street sweeping, Byrd said.

Property owners can also receive credits for the fee by making stormwater management improvements such as rain barrels, tree canopies, and rain gardens. Byrd said the city has already met its five-year goal of reducing runoff pollutants by 15 percent.

Degner credited Byrd with “trying to come up with a fair and equitable approach.”

Although Byrd was the only Republican on the council for several years, Degner said Byrd did not bring ideology into arguments on local issues, but weighed each problem independently as it arose.

“Ted was consistent in his approach in wanting short-term decisions to be made in alignment with long-term city planning,” Degner said. “And if there was not a long-term plan for that specific issue, he “would advocate making a plan.”

To this end, Byrd instituted a financial committee on the council, which meets with independent auditors annually.

Ideally, he said, the committee helps discern between “wants versus needs,” based on what the city can afford. He said he views Vice Mayor Richard Baugh as another council member who is “well-versed” in the city’s financial reality.

But when it comes to needs, especially as Harrisonburg has transformed over the last 12 years, Byrd said he believes strongly in investing in infrastructure that will prepare Harrisonburg and its residents for a booming future.

“I’ve always tried to focus on good transportation systems, good public safety, good and fairly funded schools, and hopefully, to provide the framework where we can have a viable economic system where we have jobs – where we have growth,” says Byrd.

Byrd has examined that framework from multiple angles en route to his role on city council. He studied economics at the University of Virginia, worked in trucking for a few years up and down the East Coast, and returned to Harrisonburg to get his masters in public administration at James Madison University. He then worked in economic development for both the city and county, before diving into the poultry industry after marrying his wife, Stephanne.

Now that their four children are grown, and his time on the council has ended, Byrd says he and Stephanne hope to travel more.

Over the past 12 years, “a lot of things that needed to be done have been done,” he said.

But he said he feels he is leaving a city government that’s on an upward trajectory, facilitated by “a very professional and loyal staff, from department heads to hourly employees.”

At Tuesday’s council meeting, several council members took turns thanking Byrd for his commitment and public service to Harrisonburg and presented him with a framed resolution in recognition as the audience clapped.

“It’s been an honor and pleasure to serve,” he told The Citizen later, “and hopefully give a little back and leave it a little better for the next generation.”