What’s next for the Not Thomas Harrison House?

The small stone house sits just west of the intersection of Main and Bruce Streets in downtown Harrisonburg. Noticeably different than the rest of the city’s architecture, it was thought for generations to be the home of the town’s founder, Thomas Harrison.

As it turns out though, he never lived there, which archaeologists announced to the city council in October. The team’s research also points to the home most likely being built and inhabited by enslaved people decades after Harrison had died.

What has been called the Thomas Harrison House for many years — and what the city of Harrisonburg planned to spend $1 million to restore and turn into a museum of the founder’s life — now is in limbo as city staff decides where to go from here. But some residents see an opportunity for the still-historic, if not as old as first advertised, building to delve into more of the area’s background.

The city purchased the property from Asbury United Methodist Church to conduct a historic restoration, according to Ande Banks, deputy city manager for the City of Harrisonburg.

Harrisonburg pledged $500,000 in conjunction with matching funds from the Margaret Grattan Weaver Foundation. 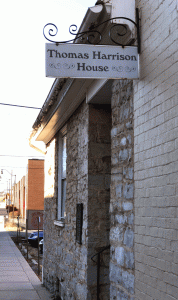 The property near the corner of Bruce and Main Streets.

The city brought on Frazier Associates in Staunton to perform a historic restoration, and then Carole Nash, a JMU associate professor and director of the Shenandoah National Park Environmental Archaeology Program, to lead the archeological project.

While the city began with the assumption that this was Harrison’s house and that it was constructed in the 1750s, Banks said they still needed to determine a more precise age for the building using data analysis to build a bigger picture.

“In fact, that kind of ‘circa date’ is even on the national register classification for the Thomas Harrison House. That it was Thomas Harrison’s house and that it was constructed in the 1750s,” Banks said. The Virginia Department of Historic Resources, which added the building on its register in 1973, also still lists its construction as “ca. 1750.”

To investigate, Nash and her team conducted a paint analysis, brought in an architectural historian, and then utilized the most significant piece of the analysis: the dendrochronology, or the science or technique of dating events and archaeological artifacts by using the characteristic patterns of annual growth rings in timber and tree trunks.

This analysis cracked generations of assumptions about the home wide open. The archaeologists learned that the beams in the cellar were cut between 1789 and 1790.

The trees that were used for the structure of the house were cut years after Thomas Harrison died in 1785.

Banks admitted that his first reaction to the findings was, “Wow.”

“But by the same token,” Banks said, “science is science. Sure, it can be kind of shocking just from the standpoint that I thought it was built in the 1750s and now we are realizing it wasn’t built in the 1750s, it doesn’t change dramatically the historical significance of the building for our community.”

The historic listing with the state, for instance, outlines the key roles the building played in the 1790s and the early 1800s. For instance, in 1794, it served as the site of the first Methodist conference west of the Blue Ridge Mountains, according to the register.

During the Harrisonburg City Council meeting in October, Nash delivered her findings to the mayor and council, who were stunned.

“So we know he didn’t live here, he didn’t build it, and we don’t know who lived there, correct?” Mayor Deanna Reed asked Nash, who concurred with the mayor’s assessment.

Nash and her team told council that they had uncovered artifacts in the basement of the home that suggested enslaved people lived in the basement, and that the building might have served as an inn.

Banks said he wasn’t surprised that some artifacts indicated the building was inhabited by enslaved people.

“We are talking about a time period where enslaved people were being used here in the Valley and across the Commonwealth,” says Banks.

Suddenly, the plan to develop the house into a museum about the life of the city’s founder was thrown up in the air.

And some began to question the matching gift donation from the Margaret Grattan Weaver Foundation. Weaver, a prominent local philanthropist who died in 2001, served as president of the United Daughters of the Confederacy in her lifetime, as Steven Thomas, a community activist and an organizer with the Northeast Neighborhood Association of Harrisonburg, pointed out in a statement to The Citizen.

The Southern Poverty Law Center counts the group among the leading proponents of the “cult of the lost cause.”

Thomas, who also serves as co-founder of the Harrisonburg-Rockingham County chapter of Coming to the Table, also said in the statement that this is a pivotal moment for Harrisonburg’s city council.

“This is an invaluable opportunity and tool for truth-telling and racial reconciliation should city officials demonstrate the bold leadership this moment calls for,” he wrote. “Pausing to fund an enterprise declared not as originally advertised and affording the community time for feedback and discussion is necessary at this juncture.”

Instead, he suggested using this an opportunity to address slavery and the plight of enslaved people in the region.

“The enslaved inhabitants of the cellar at the building formerly known as the ‘Thomas-Harrison House’ would have sought refuge in historic Newtown in the years following the Civil War. Exploring a broader collaboration between all parties involved in the downtown restoration effort and those conducting similar work in northeast Harrisonburg is the starting point for a city government and community devoted to transforming the historical harms of white supremacy,” Thomas wrote.

Banks said the city was initially “excited with the anticipation that a local foundation who highlights the history of our community was willing to put forth a half a million dollars for the restoration of a historic building in our community.”

“As far as I know, the foundation is still committed to the project, about speaking to the history of a larger community, not just Thomas Harrison and his family, but all the peoples of this community, because now we are realizing that it was not directly tied to Thomas Harrison, beyond perhaps the fact that this house was constructed on his land and in a vision that he had for the development of Harrisonburg,” Banks said.

Moving from the past to the future

Banks said the ultimate use of the building was always “going to be informed by the research.”  So the project will have to change.

“I think we will be doing a disservice now if we try to stick in some way to this notion that this was Thomas Harrison’s house,” he said. “We now have solid scientific evidence that contradicts that.”

He said he hopes the building, which is one of the earliest still-standing buildings in Harrisonburg, will speak to a larger history of this entire community — not just about the Harrison family, but more about this community.

City staff and community leaders now must figure out how to form a recommendation to the council to do that.

“I find it more and more difficult to somehow propose a recommendation on moving forward with trying to interpret this as somehow directly tied to Thomas Harrison, because we know that is was constructed after his death,” he said.

And that likely starts with a name change.