Police chief wants officers to better connect with the community. Here are some ways he plans to do it. 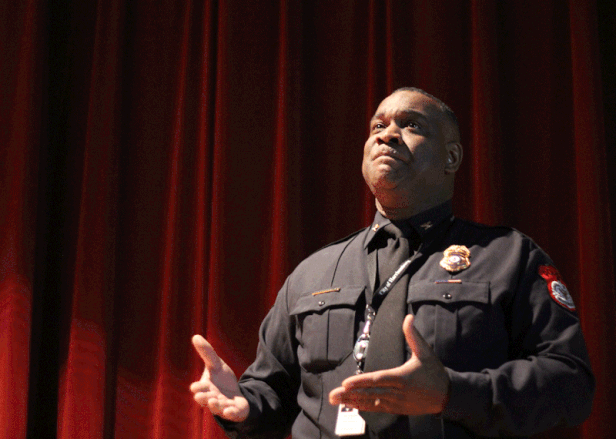 As Harrisonburg Police Chief Eric English outlined his policing philosophies and answered questions from about 30 community members at his first town hall meeting Monday, he kept returning to a central theme.

“Public safety is a partnership,” English told those in attendance, including several of his officers, at the Thomas Harrison Middle School auditorium. “We can’t police the city alone.”

After serving with Richmond Police Department for 29 years, English joined Harrisonburg Police Department last summer. And he brought with him many of the practices and approaches he honed while in Richmond, including projecting openness.

“I hope people know my door is always open,” he said. “I’m amiable and accessible. My cell phone is on my business card, and I give those out to anybody who asks.”

As part of that, he spent about two-thirds of the hour-and-a-half town hall meeting answering questions, which covered a broad range of topics, including whether the police budget will increase, what data the department collects, how the city police work with JMU police, what factors are driving drug overdoses and how the police deals with federal immigration officers of the Immigration and Customs Enforcement Department, or ICE.

One person cited data collected in 2016 that showed a disproportionate use-of-force arrests of black individuals, and asked if similar data for 2018 could be released. English said he has not seen this data for either year, and would look at the data to see if there is a disparity in treatment in Harrisonburg.

But English said that looking at use-of-force data doesn’t always give a clear picture of a situation because an encounter can escalate if a person resists arrest.

“If I grab you, and you pull away from me, and then I have to grab you and take you to the ground, that’s use of force because it wasn’t something where you put your hands behind your back and said you’re coming with me,” he said. “A lot of times, if you’re going to get locked up, people don’t want to go quietly.”

English said he doesn’t “buy in” when it comes to correlating broader population data with arrest data. “Just because those use of forces are occurring more on a population, just because they don’t mirror the same broader demographics, doesn’t mean that there’s something awry there,” he said. “It could be, but I think there’s more. You need to look into each situation to see what actually took place.”

Being out and about

English’s overall message, though, was that the best strategy for policing is for officers to be as integrated into the community as possible.

As part of that, he outlined specific goals for department over the next year, such as recruiting more officers who reflect Harrisonburg’s diversity and to not only incentivize, but to require, officers to be out and about across Harrisonburg — including out of the cruisers and onto the streets engaging people.

“If they see somebody out there planting flowers, they should feel comfortable saying ‘Hi’ and starting a conversation,” he said.

To encourage community relationships, English has introduced what he calls “Merchant Books.” Officers must check in at certain locations and sign the book to show they were there. This requires the officers to enter into public spaces, have conversations with people inside. It’s an opportunity to start those conversations that keep everyone accountable, English said.

English is also looking into a bicycle fleet for police officers, to get rid of the physical barrier created by the police car.

He also said working with a community is easier when the police force is staffed to represent the diversity in the community. The officers brought the idea of recruiting diversity to English on their own, he said.

They see a need for more women and people of color represented in staffing, especially those of Latino heritage, he said.

“We have issues with communication,” English said. “We’re trying to bring people in who can identify with and connect with all parts of our community, who look like people in our community.”

To better focus on recruitment efforts, English has separated recruitment from training, two areas which previously operated under the same category. That way, he said, “we can focus more on who we want to go after and focus more on maintaining those individuals once they get here.”

‘Checking in’ with community walks

Another key piece to English’s policing efforts is coordinating regular “community walks” in which police officers go door to door engaging with residents to see how things are going in the neighborhood. The department tried this in early November, “but then it got a little cold,” English said, chuckling.

English said he plans to begin them again in March by visiting a different neighborhood of Harrisonburg each month.

“We’ve got to listen to the stories around us,” he said. The idea, he added, is to get the community comfortable with police presence. “If you see a large cohort of police in your neighborhood, it might not be a raid. We’re just checking in, seeing how things are going.”

Some community members, in response, raised concerns that the “community walks” might incite fear in immigrant communities, where police officers knocking on doors could be seen as threatening. English said they will let neighborhoods know in advance before the walks occur, and to assure them the walk is not a set-up for arrests.

“[The skepticism] goes to show we need to be doing something to bridge that gap and build that trust,” he said. “We need to have conversations in order to identify the specific needs of each community, so that relationship can be built up.”

English also said he will continue to focus on his first major project since arriving: overhauling the department’s policies and seeking formal accreditation.

Applying for accreditation is a way to keep the police department on track and accountable, English said, as well as providing a way to measure progress.

“It’ll keep us in line and make sure we are doing what we said we would,” he explained.

His 2019 to-do list also includes updating the technology by introducing a new system for managing law enforcement data. This system will help collect specific demographic data for crime in Harrisonburg and help give a clear picture of where the department stands as an agency.

Other areas of concern for English include effectively dealing with increasing mental health cases, investing energy into more youth programs, establishing support systems for traumatized officers, and continuing to champion restorative justice as an approach.

English intends to hold more town hall meetings in the future, focusing on inviting specific neighborhoods each time in order to better build relationships between the police and the communities of Harrisonburg.