After a petition, press conference, and questions about process, city council postpones vote on HEC nominations 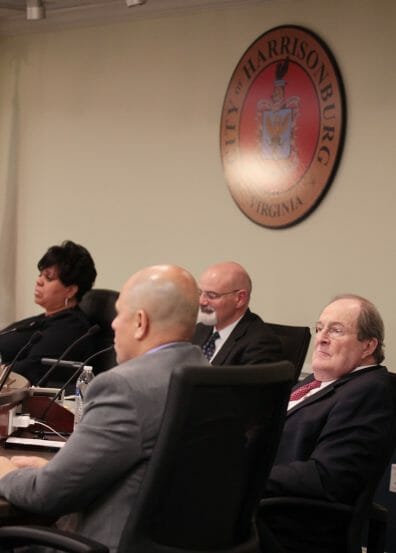 On Tuesday night, the city council again postponed a vote on appointments to the Harrisonburg Electric Commission

The once-routine practice of appointing members of the Harrisonburg Electric Commission (HEC) attracted unusual attention this week, as some city residents raised concerns about transparency and the commission’s role in meeting the city’s sustainability goals. As a result, on Tuesday night, the city council postponed action for a second month in a row on two appointments to the five-member commission that governs the city’s electric utility. Instead, the council asked HEC for more names and more information.

Unlike many other city commissions, the HEC vets its own candidates. By city code, the commissioners themselves are required to endorse a slate of three nominees each time a seat comes open. HEC then passes that list to city council, which appoints one of them.

At Tuesday’s meeting, Councilman Chris Jones pointed out that while HEC had suggested three nominees for one of its current vacancies, it simply requested the reappointment of Commissioner David Frackelton. That’s been common practice in recent years when a commissioner is nominated to serve a second term. City code limits commissioners to two consecutive three-year terms.

The city council voted unanimously to postpone action on the nominations, and requested a full list of three nominees for Frackelton’s seat. The decision comes amidst a flurry of community concern over the degree of transparency in HEC’s self-selection process.

“It’s a totally closed process, and we’re saying it needs to be transparent,” said Pete Bsumek, a city resident and media contact for Renew Rocktown, a local environmental advocacy coalition. “There are no stated criteria for HEC commissioners, and there’s also no place for the public to propose nominees. In all other parts of the city, there is a clear process and a place for the public to voice opinions.”

Before Tuesday’s meeting, Renew Rocktown held a press conference calling for transparency in the commissioner selection process, outlined in a petition addressed to the five members of city council and O’Dell. The petition had reached nearly 300 signatures by Wednesday night.

As the council discussed postponing the nominations, Councilman Sal Romero called for “greater alignment” between the city’s various appointment processes, noting that “it felt a bit odd” to appoint a name that was presented to him without any further information.

“HEC has a good reputation and they do a wonderful service,” said Romero, in an interview on Wednesday. “I assume they have a system of vetting those who they are going to be recommending, [but] … if I’m going to be voting for appointing someone on a commission, I definitely want more information.”

According to HEC General Manager Brian O’Dell, the commission’s self-selection process exists for a reason. “Our process is clearly different than that of other boards and commissions within the city, and it is self-appointing through the process outlined in Section 8,” said O’Dell, referring to city code. “One of the purposes of that is that it can remain non-political and be about the business of the commission. Basically we’re an apolitical organization, so by self-appointing and having council select from the names, it keeps both sides honest.”

But Bsumek and others have their doubts. He pointed out that a clear vetting process – or even stated qualifications for HEC commissioners – could actually help depoliticize the process.

“To have an internal process, like HEC does, really limits the pool of talent, because people are chosen on a who-knows-who basis,” said Bsumek. “As a city, we select any number of city officials without having it become politicized.”

The nominations presented to city council provide no information about the candidates’ qualifications or backgrounds. At Tuesday’s meeting, Jones asked for biographical information to be attached with the nominations – something that council requires for other board and commission appointments.

For as long as O’Dell can remember, such concerns about HEC’s nominations are unprecedented.

“The process has worked effectively for 60 years and we’re very happy with the way the process was set up,” he said.

Some of the concern over the current HEC vacancies is related to the city’s verbal endorsement of a sustainability action plan in October. Bsumek and other Renew Rocktown members worry that the appointments actually hinder implementation of such a plan.

“This started when it came to our attention that the nominee put forward by HEC for reappointment had posted climate denial propaganda on Facebook,” said Bsumek. “Given that HEC will have some role in addressing the city’s sustainability goals, it seems inappropriate for someone to be in [that] position with those views.”

Frackelton, the nominee in question, was appointed to HEC in 2017 to complete a term that expired in December. The Renew Rocktown petition questions his reappointment, stating that it “would be inconsistent with the City’s commitment to sustainability.” It links to a document showing several screenshots of posts from Frackelton’s Facebook account. Those posts have since been removed from public view. When reached by phone Wednesday morning, Frackelton declined to comment.

Pointing to initiatives such as installing LED road lighting, a weatherization program, its electric vehicle charging stations and the city’s 1,100kW of solar generation capacity, O’Dell responded to the petition saying that HEC is “indeed more aligned with the City’s sustainability goals than is represented in the petition.”

O’Dell said that commissioners are often selected on “the basis of their business acumen” and their “willingness to engage in studying complicated financials.” As a result, bankers, lawyers and business leaders from the community have all served on the commission.

“The mandate of HEC has done well for many years, but there’s a need now for more goals, to have more things in the mission statement,” he said. “And we won’t be able to reach those new goals unless we have commission members who are capable of moving them forward.”