Squares of colored paper and old maps fill the center of a table as six pairs of hands fold and press creases into the paper. After multiple rounds of folding and unfolding squares of paper into diamonds and triangles, they become origami paper cranes. 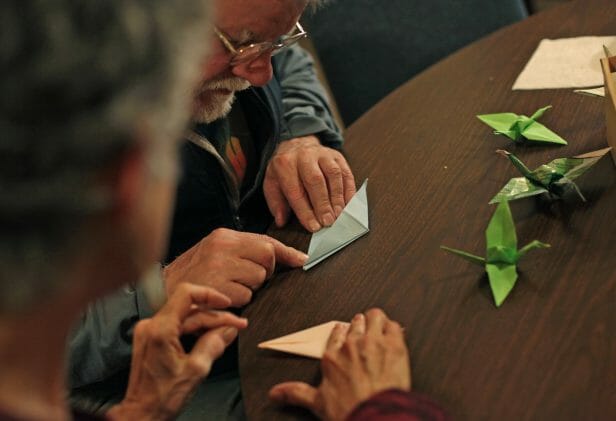 “Our goal is to make 1,000 of the cranes,” said JW Spear, as he attached a small tag to each one. “According to Japanese tradition, anyone who makes a thousand paper cranes will have their wish granted….Our wish is for world peace.”

Spear is a member of Valley Friends Meeting of the Religious Society of Friends, also known as the Quakers. He joined a dozen others to assemble the cranes at their meeting house in Dayton. The paper cranes will be handed out at Dayton’s fall festival in October, each carrying a tag explaining the group’s hope for peace and inviting the receiver to attend a Sunday worship meeting. 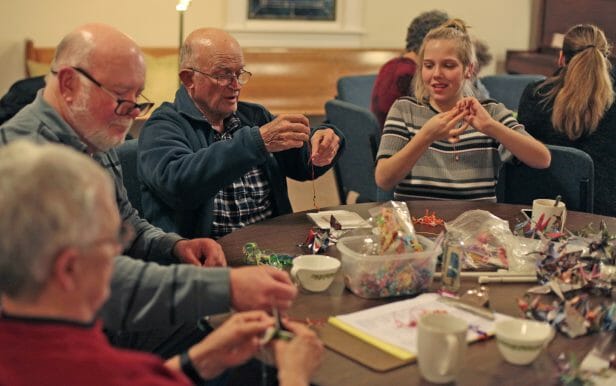 The building they are in was formerly a Presbyterian church, built in 1895. The historic brick building is nestled amongst homes in a quiet neighborhood. Its stained glass windows glow from within to passersby in the evening. 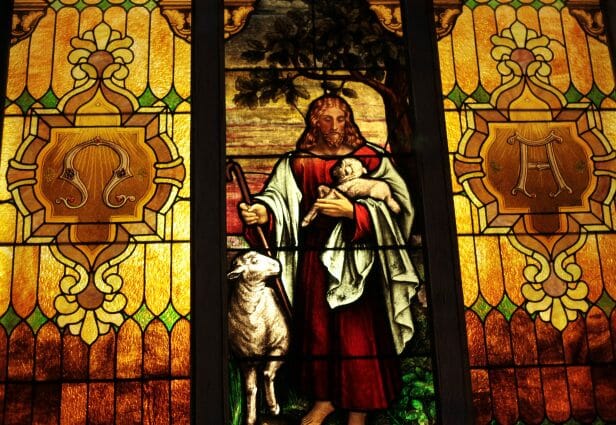 Quakers are plain people. They worship in silence as a group, without the need for a preacher or choir or even pews. Before purchasing the church building in 1999, Valley Friends rotated between people’s homes and rented spaces to gather for worship. Now, the 45-member group has made Dayton its religious home for 20 years.

It wasn’t without some reservations that they chose the church. Three sides of the building are adorned with stained glass windows, one of the features not typically found in traditional Quaker meeting houses, along with crosses, religious paintings and statues. But after much deliberation and prayer, the congregation decided to leave the windows intact to honor the historical significance of the building and respect the Dayton families whose ancestors gifted the windows. The space was to be open to community members who want to join Valley Friends in worship, shared meals, mediation and yoga. 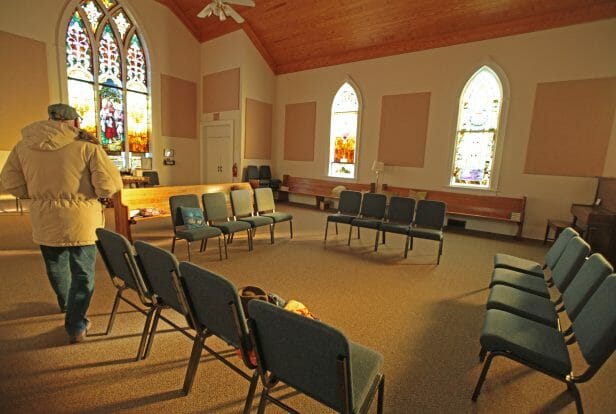 The Quakers’ beliefs also emphasize stewardship and – upon listening to the divine within themselves and others – the group began to feel a need to do something about climate destabilization. In 2014, they put out a statement to invite other religious groups and communities to make an effort toward reducing their carbon footprint on the environment. Having already done an energy audit on their meeting house, one member said, “Are we going to put our money where our mouth is?” They formed a committee charged with looking into alternative energy sources that would power their building. Installing photovoltaic panels on the south-facing side of the roof was the solution they all agreed to. The first step toward their goal of achieving a “net zero” electricity status was replacing the 60-year-old oil furnace with an electric heat pump. Next, to clear the financial hurdle of installing a 34-panel solar array, the group entered a power-purchase agreement with the solar energy company, Sigora Solar. That means Sigora owns the panels and paid to buy and install them, while Valley Friends pays a monthly fee to purchase the power the panels produce. The agreement includes an option for Valley Friends to purchase the array in the future. 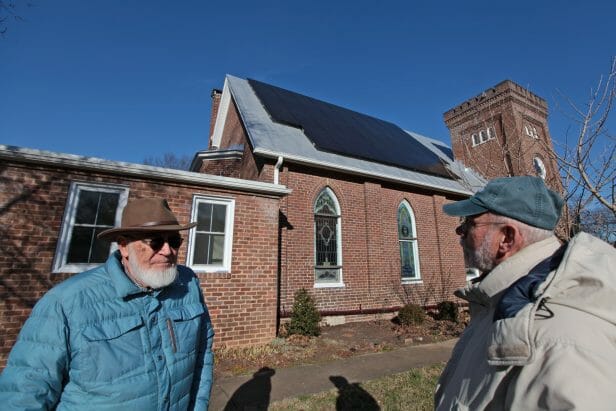 “If we can do it, anybody can,” said Dave Pruett, a member of Valley Friends. Looking over the digital readout of the new inverter system, he checks the outputs of the array. On a bright, sunny day the panels should generate more power than the building needs, causing the electric meter to run backwards. The excess electricity will feed back into the grid maintained by Dominion Energy, a process known as “net metering.” So far, Pruett said, the panels have been generating an average of about 35 kilowatt hours of electricity each day since they went online in mid-November. They estimate the array will cover between 80 and 90 percent of the building’s energy usage, and result in an annual utility cost savings of around $1,000. It also puts the meetinghouse close to a net-zero electricity status, a phrase that commonly means the solar panels produce as much electricity as the building consumes. 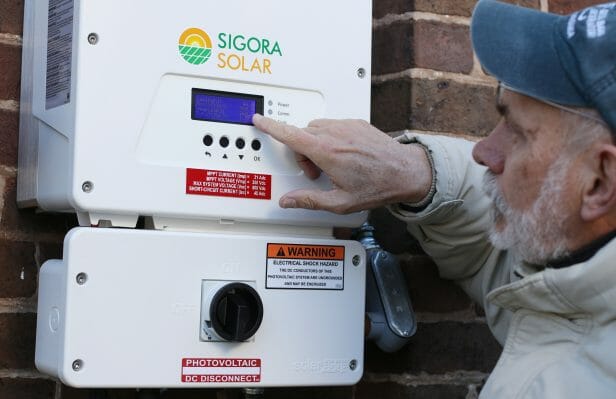 Now, part of the metal roof on the meetinghouse is not only being warmed by the low winter sun, but also generating power to illuminate and heat the space for those inside. Since the discussions of solarization arose almost five years ago, three families at Valley Friends decided to have solar panels installed on their own homes. Their hope for world peace is now joined by the hope that other individuals and community groups will be encouraged to make the transition to solar power. 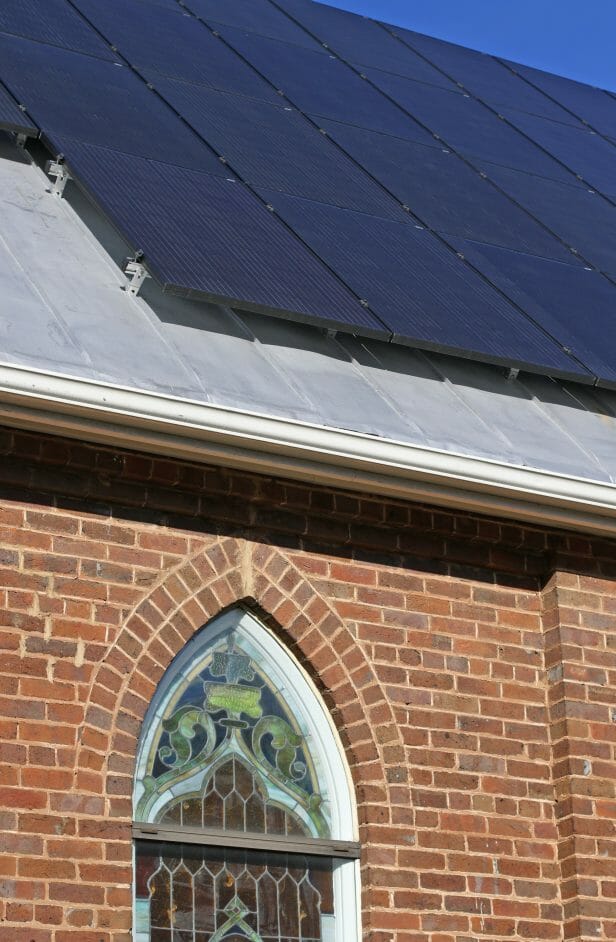