For the first time since Gerald Ford was president, Harrisonburg’s estimated population has decreased – if only ever so slightly. According to figures just released by the University of Virginia’s Weldon Cooper Center, Harrisonburg’s July 1, 2018, population was an estimated 54,606. That’s 83 fewer people than the July 1, 2017, estimate of 54,689, a decrease of 0.2 percent.

Hamilton Lombard, a research and policy analyst with the Weldon Cooper Center, pointed to JMU’s first enrollment decrease since 2004, along with a 300-student drop in its on-campus housing from 2017, as the major driver of the city’s slight population decline. EMU also reported a decrease in both overall enrollment and the number of students living on campus.

Although the city’s population estimate is dated July 1, to correspond with the start of a new fiscal year, it includes all college students who live in the city during the school year.

The last time Harrisonburg’s estimated population decreased from one year to the next was in 1975-76, when the total fell from 18,900 to 18,600. That, however, was a blip. Since then, the city’s population grown steadily and very nearly tripled over those next four decades.

And despite last year’s small decrease, Harrisonburg has remained one of Virginia’s fastest-growing localities of this decade.

Since 2010, the city has grown by 11.6 percent, 13th-highest among the state’s 133 counties and independent cities. Outside of Northern Virginia, Harrisonburg is the 6th-fastest growing locality in the state. 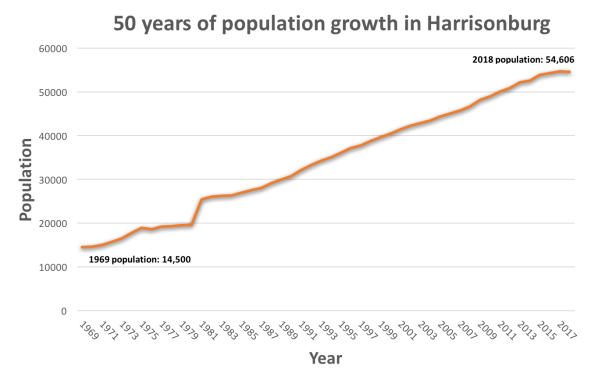 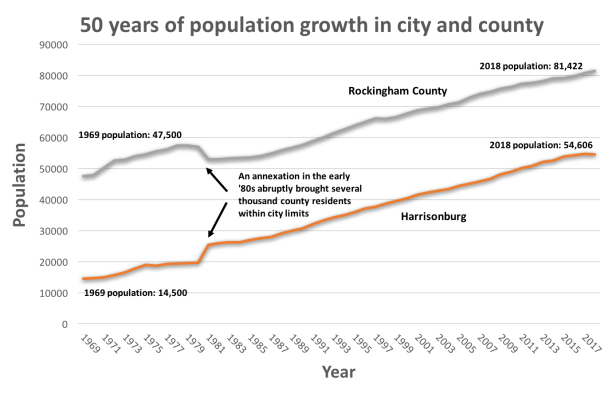 Together, the city and county make up the Harrisonburg Metropolitan Statistical Area, with a total 2018 estimated population of 136,028. That figure rose 0.5 percent from 2017, when the estimated total was 135,355.

Since the 2010 census, which put the metro area’s population at 125,228, the population of Harrisonburg and Rockingham County has risen by an estimated 10,800 people. Over that period, it was the third-fastest growing metro area in Virginia. 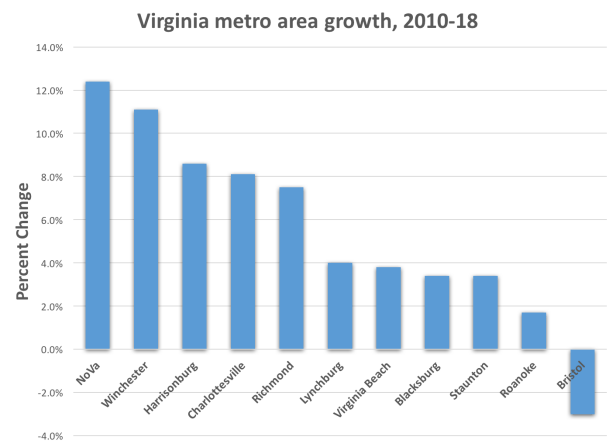 Over the past 50 years, growth has not come equally to the Shenandoah Valley. The chart below shows population trends in the Valley’s 13 cities and counties from Rockbridge County up to Frederick and Clarke counties. Five of the those localities – Frederick, Shenandoah and Warren counties, along with Harrisonburg and Winchester – grew faster than Virginia’s 1.6 percent annual growth rate over that period. Clarke, Rockingham and Augusta counties’ annual growth rates were slightly below that state average; neither Page County, Rockbridge County, Staunton nor Waynesboro cracked 1 percent annual growth. And Lexington is very slightly smaller today than it was 50 years ago. 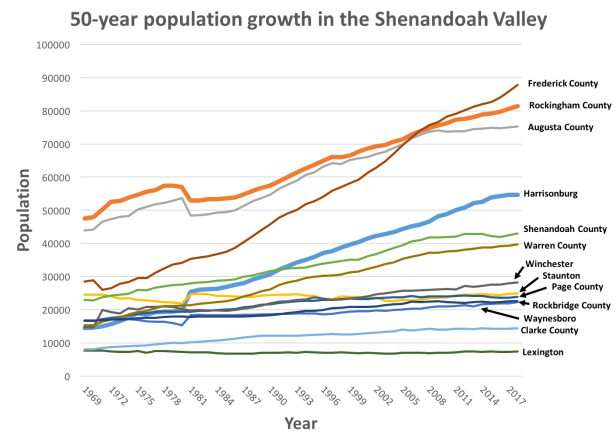 Along with the population estimates, the Weldon Cooper Center also released numbers on the two components of population change in each locality – natural change (births minus deaths) and migration (“moving,” in layman’s terms). Since 2010, migration has been the primary driver of Harrisonburg’s population growth. In Rockingham County, it plays an even larger role. 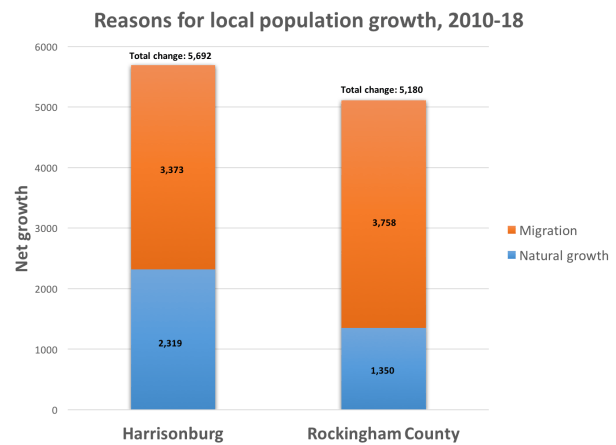