This story was updated on Wednesday afternoon to add comment from Sen. Obenshain

Obenshain defeated Moore in the 2015 general election with more than twice the number of votes— 25,042 to 11,308. He won all but one of the jurisdictions in the district, including Shenandoah, Page, Warren, Rappahannock counties and the northern half of Rockingham County that falls in the 26th District. Moore bested Obenshain in Harrisonburg by nearly 100 votes.

In her announcement, made at a press conference at the Rockingham County Government Services Building, she said the major difference between her last run and the current run is the political climate of the last three years.

“I ran last time because it was clear to me that Mark Obenshain was not serving the people of this district,” Moore said. “Instead he was serving other masters — the big money, at our expense.”

During the press conference, Moore — a writer, activist and retired teacher — highlighted Obenshain’s position on climate change, saying he consistently served the fossil fuel companies of his major donors. She specifically cited Dominion Energy and the Koch Brothers, saying Obenshain was “willing to go along with their lies to prevent the further expansion of clean energy in Virginia.”

The Virginia Public Access Project compilation of Obenshain’s top donors shows the Koch Industries Inc. has given Obenshain’s campaign $60,500 over the years — 10th most among all donors — and Dominion Energy has contributed $57,353, which is 12th most.

Obenshain, who is in Richmond for the General Assembly session, has not formally announced a reelection bid but told The Citizen on Wednesday that he plans to run again.

“I am looking forward to campaigning vigorously across the district like I always have, whether I’ve had an opponent or not,” he said.

Obenshain has defended his positions on environmental issues in previous campaigns, including when he ran for Virginia attorney general in 2013.

Moore, on Tuesday, sought to portray Obenshain as straying from traditional Republican values.

“To re-elect Mark Obenshain this time, if he fails to meet the moral challenge of this moment, if he serves his party by betraying his nation, then that would just further degrade the GOP into something that my parents and all true honest conservative American patriots could not and should not ever support,” she said.

Alleyn Harned, the Harrisonburg Democratic Committee chairman, told The Citizen that Democrats are thrilled to have Moore running again.

“I am engaged in the environmental community, and her understanding of climate change was something that people were aware of and appreciated in her previous run,” he said. “I’m certainly excited about her.”

Moore has focused her platform on education, affordable healthcare, ending the opioid crisis and protecting the environment. Her website highlights support for green technology to generate jobs and push for a fair and ethical state government. Specifically, she pointed to the Center for Public Integrity, whose assessment of Virginia’s ethical framework and enforcement ended up landing the state a grade of “D.”

Moore said she “will work hard to institute enforceable ethical rules that ensure our state government is working for the people, not the big-monied interests.”

The district has historically voted Republican. 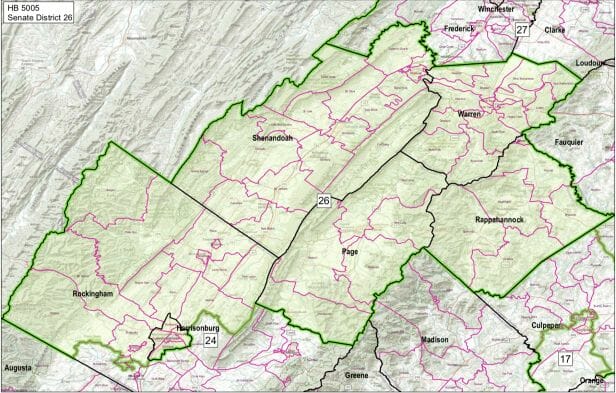 Obenshain won his first election to the seat in 2003 and has never received less than 68% of the vote in subsequent elections, including 2011 when he didn’t even draw an opponent and 2015 when he received 69% of the vote against Moore.

However, voter turnout in non-presidential elections has been up statewide since the 2016 presidential election.  The last election for the seat was during the final year of the Obama administration, which Harned said was in a different political climate.

“Everyone was gearing up for 2016 and might not have even been paying attention to 2015,” Harned said. “Compared to now, it’s a night-and-day difference. There’s a lot of energized people. Our meetings are very well attended, and throughout the 26th senate district, people are energized.”

Harned noted that Moore has many family members who are conservative, and that it can bridge the divide between voters in the district.

“Being raised by and having some Republicans in her family, she isn’t reluctant to have the kind of face-to-face dialogues with people,” Harned said. “To hear their concerns and understand their world view.”

The general election is Nov. 5.