On I-81 improvements, legislators detour around tax-or-toll decision and opt for more time 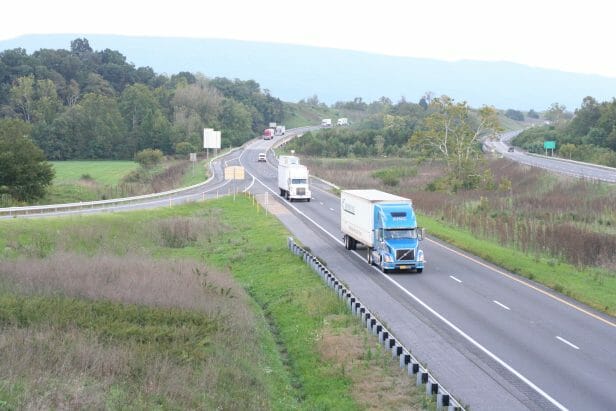 Truck traffic on I-81 in Shenandoah County. Photo by Andrew Jenner

Committees in both chambers of the General Assembly on Thursday approved revised versions of bills by Valley legislators that outline $2.2 billion in needed improvements to I-81 but now no longer explain how to pay for them.

Del. Steve Landes, R-Verona, and Sen. Mark Obenshain, R-Harrisonburg, presented their chambers’ respective committees with re-written versions of their twin House and Senate bills. The revised bills ditch a provision to create a tolling scheme along I-81 to pay for upgrades to make the major transit artery safer and less congested. Instead, the bills passed won overwhelming support with a plan for a group of state leaders to continue studying ways to pay for it — essentially postponing for a year the question of how to fund those improvements.

The new legislation, which Obenshain called a “pale shadow of its former self,” was meant to keep I-81 in the foreground of public discussions amid continued disagreement over funding methods.

With the changes, HB 2718  passed the House Transportation Committee on Thursday morning by a 22-0 vote. Unveiled last month with the support of Democratic Gov. Ralph Northam, the legislation relied on an I-81 improvements plan adopted by the Commonwealth Transportation Board last December. Obenshain’s nearly identical bill with similar changes cleared the Senate finance committee later in the day by a 13-1 vote.

The Interstate 81 Committee, created by the substitute legislation to weigh all funding options to fix I-81, would consist of 15 voting members, including seven state legislators, the chairs of five planning district commissions and representatives from each VDOT district along the I-81 corridor.

The committee would hold meetings to gather public input on funding options and submit recommendations to the legislature by Dec. 15, 2019. State transportation planners conducted a similar process throughout 2018 when they developed a prioritized list of projects to improve safety and reduce congestion on I-81. That plan also recommended either new regional taxes or tolling to fund those improvements but, according to Landes, legislators haven’t found enough agreement this session on how to proceed.

“There isn’t consensus on the funding source at this point, both in the House or the Senate,” Landes told the members of the transportation committee. “What we decided to do to get the most support from our neighbors … is to look at this over the next year and bring back a recommendation over what the consensus funding source is. It also allows us to have more public input over the next year.”

Representatives of various industry, manufacturing and business groups spoke in support of the substitute before the committee. Several said they had opposed the bill in its original form, designating tolling as the solution for I-81.

“The trucking industry is willing to pay its fair share of making those improvements,” said Dale Bennett, president and CEO of the Virginia Trucking Association, which strongly opposes tolling on the Interstate. “We support the substitute. That will give us an opportunity to further explore options that we believe are fair and efficient for trucking to pay its fair share.”

Late Thursday afternoon, Obenshain  presented his I-81 bill, SB 1716, to the Senate Finance Committee. Obenshain offered the substitute bill that was nearly identical to the one Landes unveiled earlier in the day. It removed tolling provisions and called for creating the Interstate 81 Committee to keep weighing funding options.

In his remarks before the committee, Obenshain called the rewritten bill “a pale shadow of its former self” but said it had provoked “a useful and very productive discussion” in Richmond.

“I know that people have different opinions about how we should do this, but quite frankly, we in the Shenandoah Valley and along the I81 corridor have been talking about the need for improvements for a long, long time, but nobody’s done anything,” Obenshain said. “This was an effort to try to break the logjam.”

It appears that that task will now fall to the logjam-breaking committee created by the two I-81 bills now moving forward.

The amended bill passed the finance committee by a 13-1 vote, with two abstentions.

“A positive from this legislative effort is the targeted list of I-81 improvements that was developed as part of [last year’s] study,” said Kim Sandum, transportation lead with the Alliance for the Shenandoah Valley, in an email to The Citizen. “The study was data driven, transparent, and included many opportunities for public involvement.  As the committee, created by Senator Obenshain’s bill, gets to work it needs to follow this template laid out in the original study.”

On Thursday afternoon, the Senate Finance Committee also considered a bill introduced by Sen. John Edwards, D-Roanoke, which would have created a new 5% wholesale fuels tax, projected to generate about $880 million in new revenues for state transportation funding. In his presentation to the committee, Edwards said that $200 million of that total would be dedicated to I-81 improvements.

Like the tolling bills, Edwards’ bill was eventually reported from committee in very different form. Instead of creating a new fuels tax, it now would simply direct the Secretary of Transportation to study the effects of increasing vehicle fuel efficiency and use of hybrid and electric vehicles on existing gas tax revenues the state already collects.