The Harrisonburg City School Board unanimously passed a resolution in a special meeting Monday morning to consider an unsolicited proposal from Nielsen Builders, Inc., to oversee both the design and construction of the new high school. This proposal, if accepted, could lower the cost and speed up the school’s completion.

Nielsen, a Harrisonburg-based contractor, proposed overseeing both the project’s design and construction phases in what’s known as a “design/build” model. This allows certain construction and site preparation to begin while the design is still in progress, which “compresses the timeline,” says school board Chair Deb Fitzgerald.

Nielsen’s proposal includes hiring Grimm + Parker Architects for the architectural design – the firm that had presented the original design and estimates for the new high school.

“That’s how we did Bluestone Elementary and Elon Rhodes,” said school board member Andy Kohen after the meeting.

“Which is a perfectly legitimate, justifiable procedure,” added Fitzgerald.

Fitzgerald explained the chronological differences between the two approaches: design-bid-build goes from point A to B to C, while design/build stacks points A and B, which allows quicker progress to C.

“Which is all to the benefit to be sure that we really will open it in time for school to begin in August of 2022,” said Kohen.

In passing the resolution, the school board followed the first step of a procedure established by the Virginia Public-Private Education Facilities and Infrastructure Act of 2002, which enables them to consider this proposal’s unique project delivery model.

Those legal guidelines establish a 45-day window during which the board will accept proposals from other general contractors to make competing proposals for a design/build approach.

The 45-day window will begin in the next few days, once the board posts a “legal, public notice” on its website, Fitzgerald said. The school board’s attorneys are drafting the notice. After that window closes, the board will take 10 to 14 days to review the proposals and then select a bid. Then they must seek the city council’s approval to proceed with that proposal.

“This will change what we talk about at city council” at its meeting Tuesday, said Fitzgerald. That’s when school board members had hoped to seek approval for moving forward with the design of the new high school. “Those people who were expecting a big kind of moment for, ‘the high school finally got approved for 2022’ are not going to get that moment” yet.

Interim Superintendent Patrick Lintner will present upcoming student enrollment estimates to the city council Tuesday, and is expected to provide a brief overview of the direction the board took with its resolution Monday.

“The big deal” about today’s resolution, Fitzgerald said, is that “it starts the clock” for other contractors to submit proposals.

Board members couldn’t say publicly yet exactly how much money or time this design/build approach would save.

Kohen said this method will help ensure it will be “done with the quality that we absolutely insist on having, as soon as physically feasible, and this brings it in sooner than the original Grimm + Parker [proposal], and at an affordable price.” 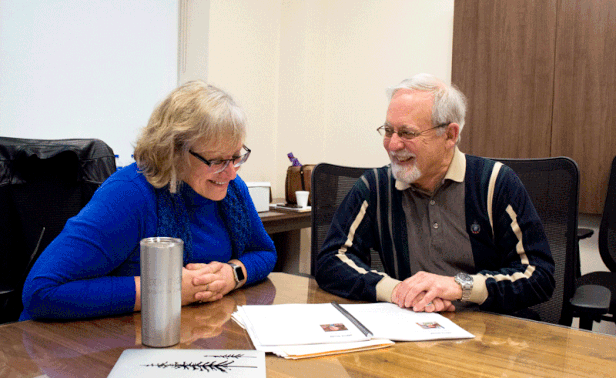 School board members Deb Fitzgerald and Andy Kohen discuss the proposal for the new high school. (Photo by Randi B. Hagi)

Nielsen’s proposal was accompanied by a check, as required by the state law governing public-private education facilities construction to assist the board in covering costs associated with “reviewing the details of what they’re proposing,” Kohen said. That could include attorney services and consultation on the accuracy of the cost estimate.

The board received the proposal on the afternoon of Feb. 4, and discussed the option of reviewing it in the closed session at the end of last Tuesday’s school board meeting.

The first of two volumes of Nielsen’s proposal will be available publicly. It includes a complete list of the subcontractors Nielsen intends to use, such as Grimm & Parker, sound system designers, and computer installers. Volume two, which includes the actual estimated costs of the project, remains confidential until the window for bids is closed.

Kohen said this proposal has “set the bar” for cost and length of the project. “And this is clearly, from our standpoint, an improvement.”

He noted that they still have to vet all the details of the proposal.

“We’re going to look at the best thing that we can do to get the school open,” Fitzgerald said.