Rising more than three miles above the surrounding plain to 19,341 feet, Tanzania’s Mount Kilimanjaro is the highest peak in Africa. Every year, thousands attempt to reach its peak and bag one of mountaineering’s “Seven Summits.” Beginning tomorrow, a group will begin hiking up Kilimanjaro with a bigger goal than just reaching the top. Each step they take will be in remembrance of Michael “M.J.” Sharp, a 2005 graduate of Eastern Mennonite University, and every mile they conquer will raise money for a scholarship established there in his legacy. 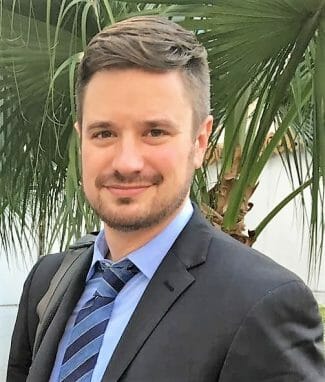 M.J. Sharp, a 2005 EMU graduate, was killed in the DRC in 2017 while working for the United Nations. Photo courtesy of the Sharp family.

Sharp spent most of his post-EMU life overseas. In 2012, he began working in the Democratic Republic of the Congo (DRC), first for the Mennonite Central Committee, and later, for the United Nations. On March 12, 2017, while investigating a mass atrocity in the country’s Kasaï-Central Province, Sharp was abducted and killed, along with his Swedish colleague Zaida Catalán. His Congolese driver and two motorcycle taxi drivers that accompanied them are missing and presumed dead. Though the killings were officially blamed on a local militia group, circumstances surrounding the deaths – which drew international attention – remain controversial.

“He loved life. He had a creative sense of adventure. He was a prankster. He was brilliant and his brilliance was connected to a kind heart, which made it a great combination,” said John Sharp, M.J.’s father and a professor at Hesston College in Kansas. “He was the guy at school to befriend someone who was new. He would befriend people on the margins. He was doing this work throughout his life. It just all came very naturally to him. He was a people person.”

Soon after M.J.’s death, one of his lifelong friends, Keith Grubaugh, came up with an idea to create a scholarship in his honor within the Center for Justice and Peacebuilding (CJP), a graduate program at EMU.

“He said ‘We’re going to do this. We’re going to extend his work. We want to train others to do that same kind of work,'” John Sharp recalled.

The result: the M.J. Sharp Peace and Justice Endowed Scholarship Fund. It provides aid to graduate students studying peacebuilding at CJP, with a special focus on Congolese students. (The Network of Humanitarian Action (NOHA) has also established a scholarship in Catalán’s name.)

“[M.J.’s] commitment was to working nonviolently to create communities that are sustainable and just,” said Daryl Byler, executive director of EMU’s CJP. “His life, in terms of being willing to take a risk to build peace, that’s something that we emphasize in our center. Peacebuilding is a costly vocation and for those of us committed to nonviolence we need to be willing to take the same kinds of risks that soldiers take in going to war. M.J.’s life very much exemplified putting your life on the line for something that you value highly.” 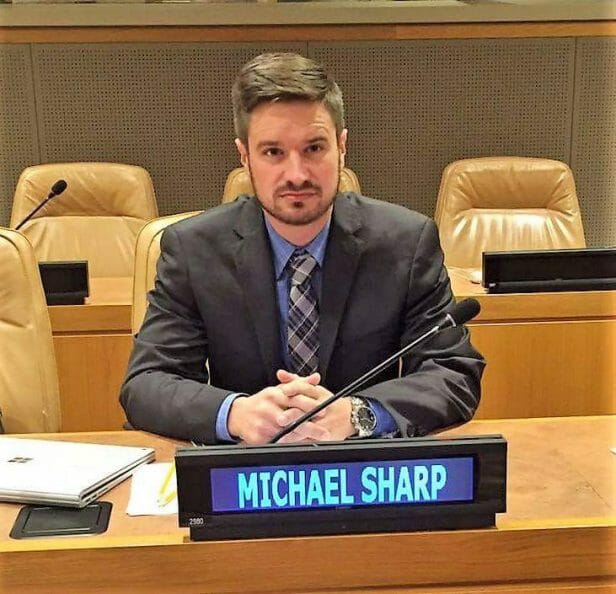 Sharp’s work for the United Nations included testimony before the Security Council. Photo courtesy of the Sharp family.

The idea of hiking Mount Kilimanjaro to raise additional funds for the scholarship was born last year. Wilmer Otto, a family friend of the Sharps, was traveling in Tanzania – which shares a border with the DRC – when someone asked him when he was going to climb Kilimanjaro.

“He came back and reported that and I said, ‘Well that was on M.J.’s bucket list, so why don’t we do it?'” John Sharp recalled.

Otto will join Sharp and nine other hikers, including one of his Congolese colleagues, Serge Lungele, in a project that became known as the MJ Dream Hike, with a goal of raising an additional $200,000 for the scholarship fund.

“It will provide a resource for us to be able to have students from Congo come and study with us,” said Byler. “The scholarship is currently at a much smaller level and the idea of this hike is to expand it dramatically.”

Members of the EMU community quickly signed onto the project.

“Kilimanjaro has actually been on my bucket list for a long time. I lived in East Africa for five years in the early ’80s. I climbed Mount Kenya then, as a much younger man, but I’ve never had a chance to climb Kilimanjaro,” said Dr. Fred Kniss, EMU’s Provost and one of the hikers.

For Kniss, the trek is very personal.

“I’ve had a real connection to the Sharp story. My son Michael was a classmate of M.J.’s. They were both named ‘Michael.” They were both history majors,” he noted. “My son Michael also ended up doing research and field work in East Africa about political violence as his graduate work. Their paths kind of paralleled in a way.”

Calling the undertaking a “hike” is a bit of an understatement. Although scaling Kilimanjaro does not require specialized climbing equipment or skills, its altitude presents a formidable challenge. The group has been preparing by working out, and going on hikes to train their muscles and break in their gear. They are also considering the emotional toll that the hike might take.

“I’ve prepared myself mentally for what may be a very taxing experience,” Sharp said. “But I’ve been saying, ‘We’ve planned this for so long. Let’s do it.'”

On March 6, the group will set off along the Lemosho route, on the western side of Kilimanjaro. They plan to reach the summit on March 12, the two-year anniversary of Sharp’s death, where the group will spread some of M.J.’s ashes and place a photo of Catalán. (They will also spread the ashes of EMU graduate Glen Lapp, an aid worker killed in Afghanistan in 2010 in alongside Harrisonburg resident Brian Carderelli, four other Americans, a German and British citizen and two Afghan nationals.)

Two current EMU students, Christy Kauffman and Riley Swartzendruber, are also among the climbers. They will document the expedition with video and web posts, and are working on a documentary about M.J.’s life. 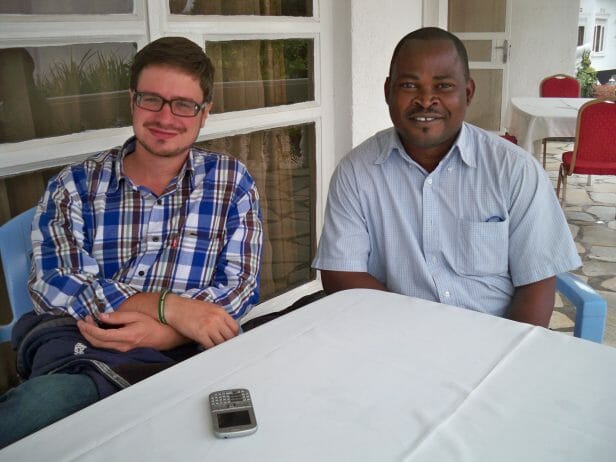 Sharp and a colleague in Goma, DRC, when he was working in the country for Mennonite Central Committee. Photo courtesy of the Sharp family.

The M.J. Dream Hike has received international attention, including the support of two Nobel Peace Prize laureates, Dr. Denis Mukwege (2018) and Leymah Gbowee (2011), a graduate of EMU’s CJP herself. Other supporters include Catalán’s mother Maria Morseley, playwright Eve Ensler and activist Jane Fonda. In a Feb. 10 post on her website Fonda asked her fans to support the project.

“This trek, in his name, will celebrate his amazing life and raise funds for the scholarship to continue the work that he loved and died for,” she wrote.

Several “honorary coaches” will be sending pre-recorded messages of encouragement for the group ascending the mountain. Among them is Byler, who will be joined in his video message by David Nyiringabo, a Congolese CJP student and the first recipient of the scholarship.

“I wish I was there to hike with them. I think that it is a good thing and it is part of the healing process for M.J.’s family and his friends. It shows that M.J.’s legacy and work can live even though he’s not here,” Nyiringabo said. “M.J. is not here physically but his vision is being carried out by other people who understand his mission. And that’s the best thing that anyone can have in their life – having other people who understand your vision and who can be there for what you love even when you’re not there.” 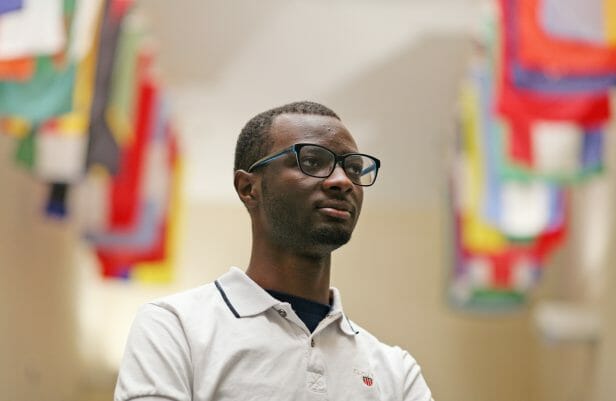 David Nyiringabo, a Congolese graduate student studying at EMU’s Center for Justice and Peacebuilding is the first recipient of the Michael J. Sharp Peace and Justice Endowed Scholarship Fund. Photo by Holly Marcus.

In its first two years, the scholarship has raised $50,000. As of Tuesday, the MJ Dream Hike had raised nearly an additional $61,000 through donations to the hikers. Byler said the scholarship currently awards $2,500 each year. It’s hoped that the hike will increase the endowment to a quarter-million dollars, allowing the scholarship award to grow by a factor of five.

“We’re known for our peacebuilding program, but we don’t have as many scholarship funds as other programs have to offer,” Kniss said. “We should be giving international students access to our training. This scholarship will focus on funding students from Congo. I think it’s a great way to remember M.J.’s legacy to promote peacebuilding in the Congo.”

Ongoing conflict in the DRC

The project hopes to bring attention to the ongoing conflict in the DRC, where decades of civil war have cost over five million lives. Conflict continues, often funded by the country’s mineral resources that are commonly used in consumer electronics.

Nyiringabo, 23, knows that conflict personally. His father was killed when he was one, and his family was internally displaced in the DRC when he was a teenager.

“I grew up like many young people over there, but I started thinking about what peace would look like in our area,” he said. “When I became internally displaced I spent two months without studying or having access to education. During that time I had this intense reflection on how peace would look in the Congo.”

“We want to focus on Congo and the violence that has been endemic there for 20 years,” John Sharp said. “And we want to [promote] conflict resolution in peaceful ways.”

“I say violence has had its day and it makes no sense to commit more violence to fix past violence,” he added. “It’s illogical. So there has to be a better way and we think nonviolent conflict resolution is the way to go.”

Nyiringabo worked as the assistant coordinator for the Congo Peace Network, a group that promotes civic education and nonviolent action, before coming to EMU. He plans to return to his country once he finishes his education in the U.S.

“The deepest desire that I have is to be helpful to my country,” he said. “I really want to be there, on the ground, in the field, with my organization, spending time with young people and convincing them that we will not change the Congo by joining rebel groups. We can change the Congo by joining putting pressure on our leaders, and on ourselves, to become better leaders.”

The MJ Dream Hike can be followed on the project’s Facebook page.